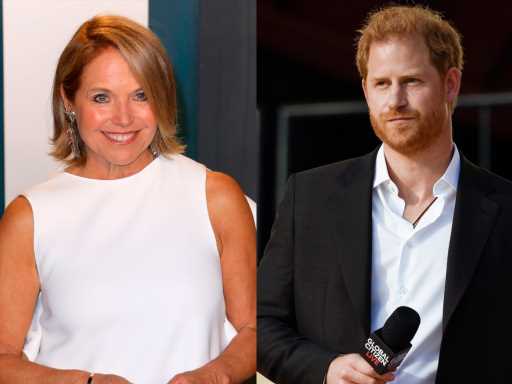 It’s been a whirlwind year for Prince Harry, and yet he still has so many projects on the horizon. Between his recent trip to New York City with wife Meghan Markle — the couple’s first since welcoming daughter Lilibet Diana — his forthcoming memoir, and the couple’s Archewell Foundation, there’s a lot in store for the Duke of Sussex. Among the many new roles Prince Harry will be filling in his post-senior royal life, is a leadership position on Aspen Institute’s Commission on Information Disorder. Harry’s coworkers will include the likes of Rashad Robinson, Chris Krebs, and Katie Couric, whose new tell-all book resurfaced a difficult chapter from Harry’s past.

Couric’s upcoming memoir, Going There, chronicles the journalist’s career and the many personalities she’s interviewed over the years, including Prince Harry. During one interview that Couric described in her tell-all, the journalist recalled the scent of cigarettes and alcohol “ooze from every pore” of Prince Harry’s body, per Daily Mail. But it’s worth noting that during Harry’s young adulthood, he struggled in the public eye with his mental health, and partying became the outlet through which he channeled the trauma of losing his mother, Princess Diana, when he was just 12 years old.

Indeed, the Duke of Sussex certainly has more hindsight when it comes to the root cause of those destructive habits that were constantly covered in the British press. “I can safely say that losing my mom at the age of 12 and therefore shutting down all of my emotions for the last 20 years has had a quite serious effect on not only my personal life but also my work as well,” Harry wrote in a March 2021 post in partnership with BetterUp.

Since those days of partying and drinking, Prince Harry has become so much more vulnerable when it comes to accessing his emotions and sharing his experience with the public. Of course, those comments certainly bring up a difficult time in Harry’s life for many fans of the young royal, but it’s just as impressive to see how far he’s come today. Perhaps Harry’s own memoir will shed even more light on this trying chapter in his life.

Before you go, click here to see the most shocking celebrity tell-alls of all time.