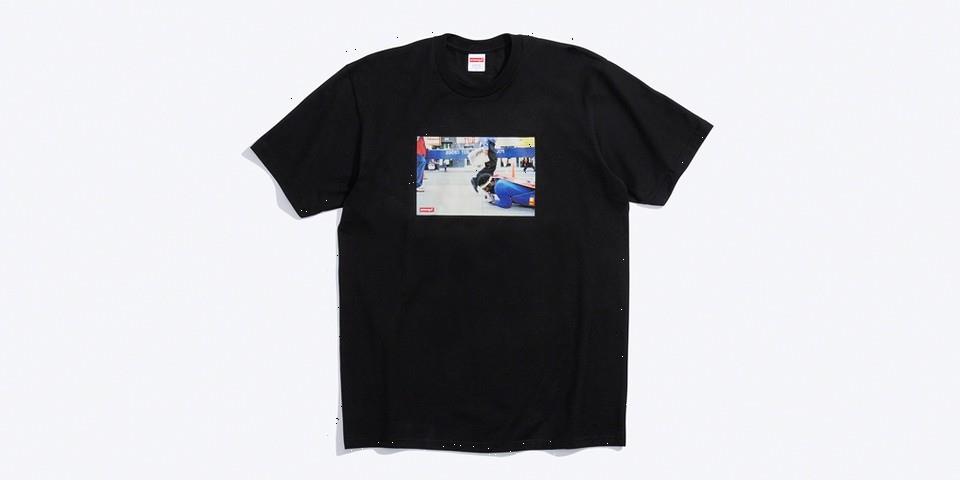 Accompanying its Nike SB Blazer Mid Fall 2022 collaboration, Supreme will also be releasing a team-up with American artist William Pope.L to mark its Fall 2022 Week 2 drop. Born in 1955, the Newark, New Jersey native developed his interest in experimental theater and performance during his graduate studies at Rutgers University.

Referring to himself as “a fisherman of social absurdity,” Pope.L put together displays in public and municipal spaces in New York. Tompkins Square Park, outside of a midtown Chase Bank, and more served as the location of showings that launched conversations around complicity, power, race, class, gender, and embodiment. The artist’s work in theater, intervention, painting, drawing, sculpture, installation, writing, and video has been described as provocative, absurd, disruptive, and vulnerable.

Some of Pope.L’s most well-known works come from his crawls series, a series of arduous street performances that span over four decades. The series started with a journey across 42nd Street in 1978, inspired by the growing number of unhoused people sleeping on the street in New York City, placing a focus on the horizontal movement of his body. Pope.L noted “all those folks, who seemed inert and unwilling to lift themselves up by their bootstraps, starting to move as one,” adding that their refusal to move contained “this energy of moving forward.”

Building on his series, between 2001 and 2009, Pope.L crawled 22 miles up Broadway, moving from the tip of Manhattan to the South Bronx. The artist dressed in a Superman costume with a skateboard on his back asked, What gestures are accepted in what spaces? Whose gestures are accepted in whose spaces? How does a space frame an action? Touching on his cultural and historical query, Pope.L said, “As soon as you go outside, there’s this issue of where you are in space, and who owns that space…So I realized that I was setting up a tension when I crawled about being in space and how you’re located in that space – how you’re supposed to behave in that space, and who can own that space, and how you can own it.”

The Pope.L x Supreme Fall 2022 collaboration will see a global release, via the streetwear imprint September 8, 11 a.m. EDT in the United States and September 10, 11 a.m. JST in Japan.