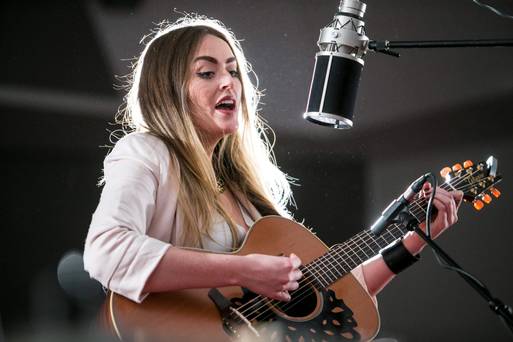 Singer Róisín O launches her TV career this week presenting the Fleadh – but she nearly said no.

The 30-year-old star felt her Irish wasn’t good enough to be live on TG4 at the annual music festival, which starts on Thursday.

However, producer Paul McKay of Fleadh TV won her over with a phone call.

“People assume I’m a fluent Gaeilgeoir because my cousin Aoife Scott and my brother Danny [Coronas frontman Danny O’Reilly] would be fluent,” she said.

“I didn’t unfortunately get that fluency growing up, something I’ve always regretted.

“I was trying to let Paul down, saying I would not be comfortable enough to do the whole show in Irish.

“But he said, ‘Look, we do have one stage where it’s not all through Irish’ and he really wanted me.

“I said I had never done any TV presenting and he said that’s what he wanted.

“He wanted someone who was more of a conversationalist, who knew the music and could have a bit of craic with the people sitting on the couch or while they were on the stage.

“I thought why not? It was a great opportunity and would add another string to my bow, so I jumped at it.” Roisin, the daughter of singer Mary Black, has been busy practising her Irish but she said the butterflies had kicked in.

“I’m a bit nervous, I have to say, but I have a great team behind me and a great producer helping and the other presenters Hector O hEochagain and Doireann Ni Ghlacain couldn’t have been more welcoming.”

Róisín will be presenting from the Boyne Stage.

“I’ve been running through my lines, especially the Irish ones to make sure I don’t make a fool of myself,” she added.

Read more: Fleadh Cheoil na hÉireann 2019 ‘awakens sense of community’ in Drogheda as over 500,000 to join in craic