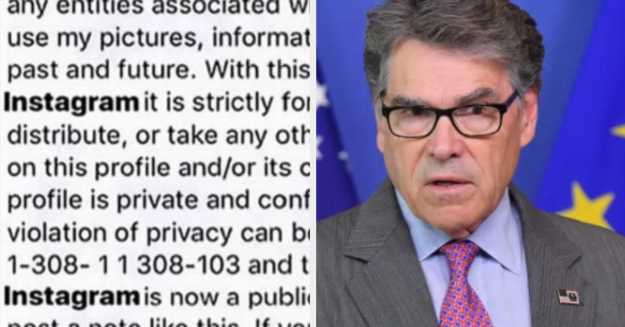 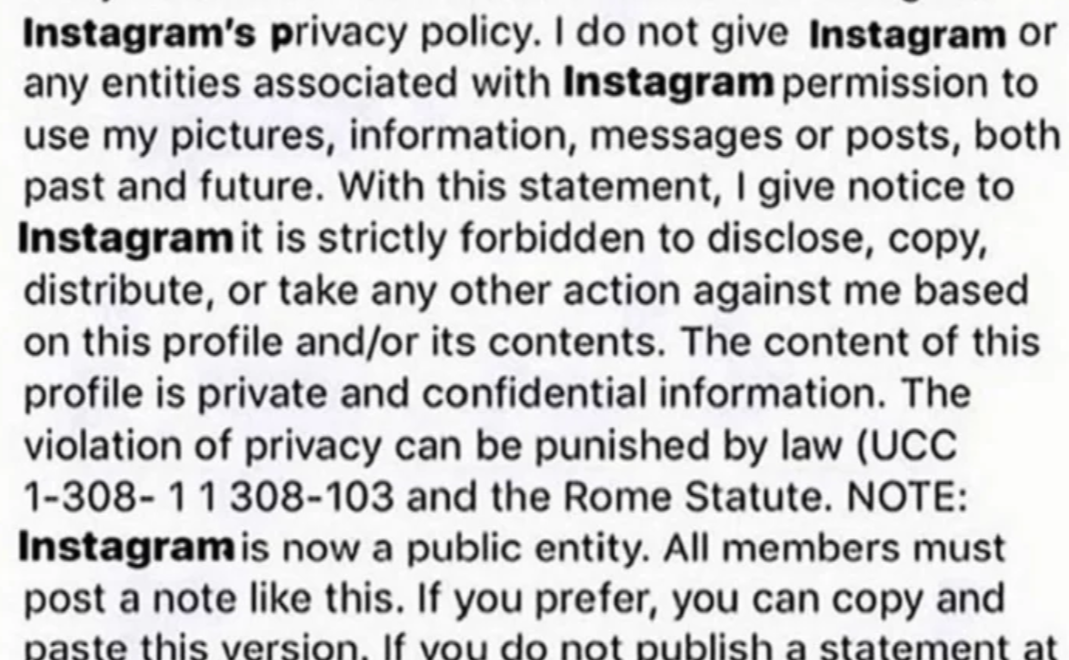 Why did so many people share such a seemingly absurd declaration on Instagram this week, announcing their images to be personal property out of fear that Instagram would be reposting old and deleted photos? The chain letter masquerading as a legal statement would apparently protect people from being commercially exploited by the Facebook-owned platform, and it was shared widely, by everyone from regular users to A-list celebrities and even a sitting cabinet secretary.

Like so many urban myths that circulate online, there’s a strange kind of truth lurking beneath the absurdity. The people posting this pseudo-legal declaration seem to believe that they are in a two-way dialogue with the social media platforms that depend on them, but the opposite is true. In reality, only companies like Facebook and Instagram can unilaterally change the legal relationship between them and their users, at any time, with nothing more than a quick posting of some seemingly ridiculous lawyer language.

Once that declaration is posted by the companies, users have two options: agree or leave. It’s not entirely surprising that some people might think this is a two-way street: that maybe the people running a site like Instagram might “read” their posts and somehow be just as obliged to live by the contracts being posted there.

They’re not, of course. And the average Instagrammer has about as much ability to negotiate contract terms with the social media giant as they do with their bank or insurance company. And “agree or leave” applies to much more than just the terms of service: they’re the only choices any of us have when confronting the various failures and abuses of Silicon Valley, from its enabling of disinformation and hate speech to its fumbling response to widespread harassment and incitement.

Whether it is the work of domestic trolls or hostile foreign interests, disinformation campaigns have spread like viral hoaxes, and had serious social impact. Social media has been used to broadcast terrorist actions, enable mob violence, and organize genocide. Foreign influence operations against marginalized US communities went on unchecked for months. While it may be tempting to place gullible users as the common problem in the spread of disinformation, this relieves pressure from the platforms themselves, who designed their systems with terrible vulnerabilities, and remained asleep at the wheel as those vulnerabilities were exploited. While this week’s Instagram hoax is banal in comparison, it is a symptom of the same problems at the heart of big tech – unconstrained scale and missing accountability.

But there’s something to be learned from letters like the one that went viral this week — versions of which have been doing the rounds for at least seven years. It’s a reminder that users want platform companies to stop exploiting them and start being responsible stewards of personal information, and might not be aware of how badly the deck is stacked against them.

While it’s easy to see the letter going around this week as nothing more than gullible internet users falling for yet another online fraud, we challenge readers to think of it as something else: a kind of altruistic hoax, akin to a misinformed consumer advocacy campaign. The declaration is comical on the surface, with its references to the International Criminal Court’s foundational “Rome Statute” — misspelled as “statue” — and Section 1-308 of the Uniform Commercial Code. But beneath that, its virality shows huge numbers of well-meaning people grappling with the vastly unequal relationship that governs the dominant information distribution systems of our age. It reveals how little the average user knows of the policies of major social media platforms, and how constrained we are in changing them, even after more than a decade of online activism. The spread of this hoax doesn’t just show a failure in consumer awareness — it shows the anxieties around privacy and data ownership that pervade the modern internet.

So rather than giggling at the victims, lets focus on the real failure here. Our country’s largest and most powerful internet companies have failed to protect the rights and privacy of their users, whose posts this week should be understood as examples of distrust, expressed through public warnings to their followers. It shows the desperation of users to negotiate the confusing landscape of online privacy, where platforms fail to clearly state how data is handled within the company.

Our reality is more distressing than the hoax. Public understanding of technology is so magical that users believe a meme is a legal response corporate malice. Our social and political institutions are buckling under digital threats to democracy, and we are in danger of granting even more power to Big Tech when we fail to see why users are making desperate declarations of independence. Internet users know things have to change — they just have a very strange way of expressing it.

Joan Donovan is the director of the Technology and Social Change Research Project at the Shorenstein Center on Media, Politics and Public Policy at Harvard Kennedy School. She researches media manipulation, disinformation, and adversarial media movements that target journalists.

Brian Friedberg is the Senior Researcher of the Technology and Social Change Research Project at the Shorenstein Center on Media, Politics and Public Policy at Harvard Kennedy School.