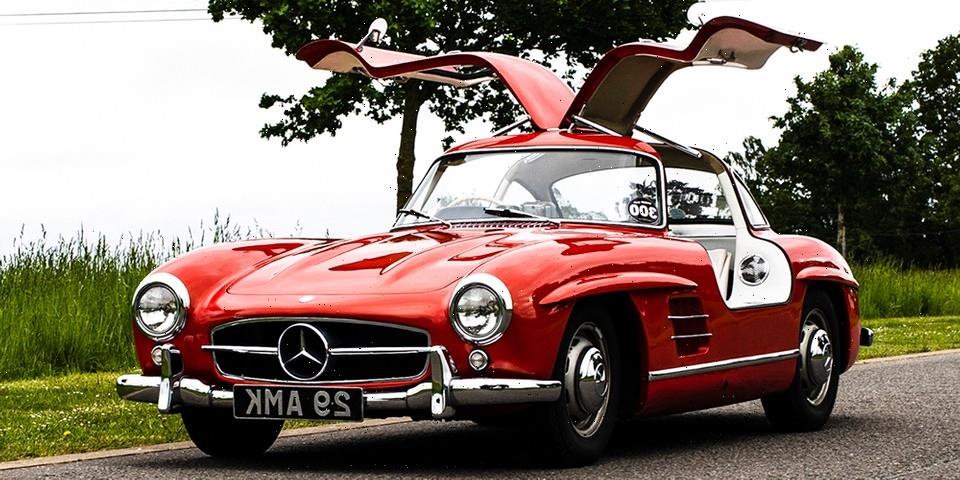 With each era comes a car that defines the times. These particular cars do more than just transport us from one destination to another; heightening emotions, conjuring up nostalgia, filling us with adrenaline, joy, and lust. In this respect, nothing comes close to the Mercedes-Benz 300SL Gullwing.

Open Road has featured many supercars, but none have the pedigree of the Gullwing. The car’s origins can be traced back to race wins, which saw the Mercedes-Benz 300SL (W 194) of 1952 place second in the grueling 1,600-kilometre Mille Miglia race. After that, the road-going 300SL Gullwing was born. Just 1,400 examples were built between 1954 and 1957, becoming the first car to bear the SL (for “Super Light”) designation, and it was arguably the world’s first proper supercar.

While Bugatti had made super-performance cars before, they weren’t born from the same kind of desire as the Gullwing. Max Hoffman, Mercedes-Benz’s United States importer at the time, saw the appeal of taking Mercedes-Benz’s racer and turning it into a road car, and he wasn’t wrong. Priced at $11,000 USD – or $132,000 USD in today’s money – it was by all means among the benchmark of supercar dollars. Couple that with the dramatically aerodynamic body, 215 BHP and a 135 MPH top speed, the limited production run and those iconic Gullwing doors, and the supercar label feels justified. 1 of 4 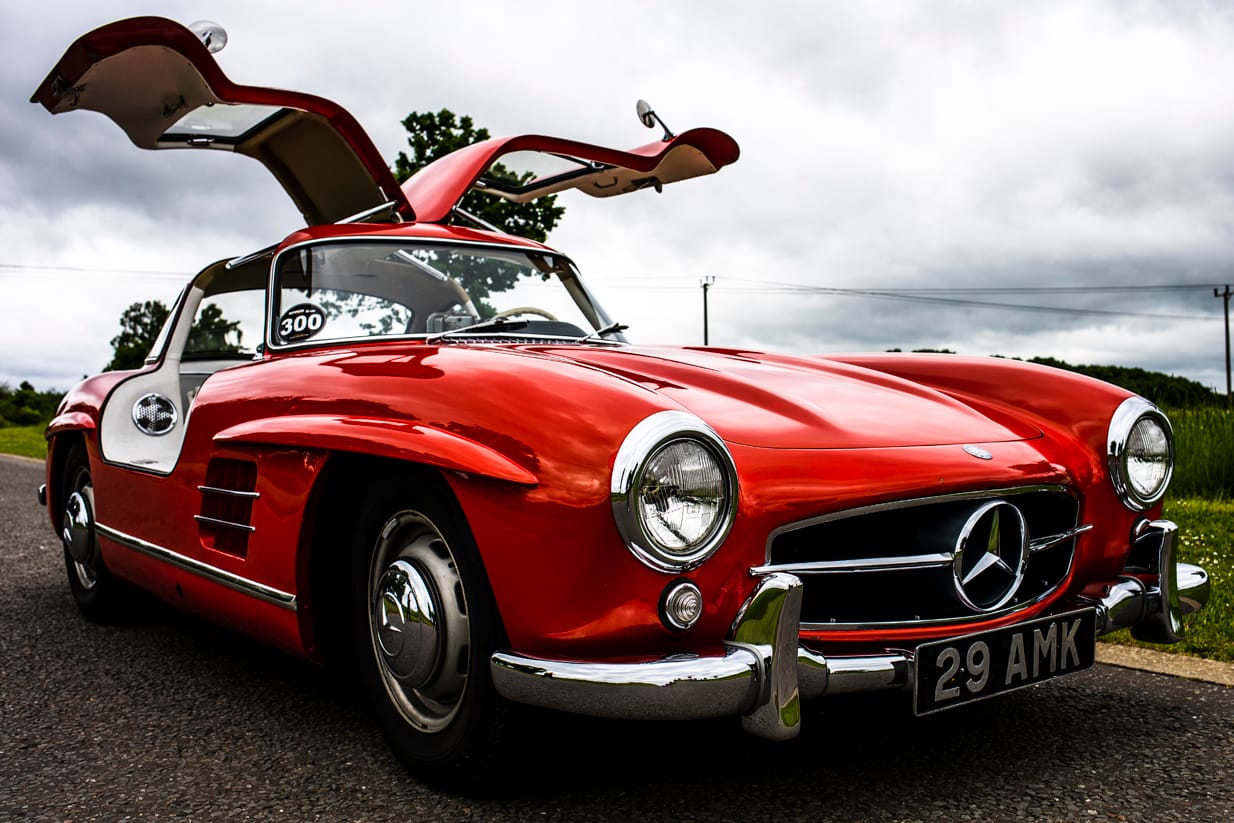 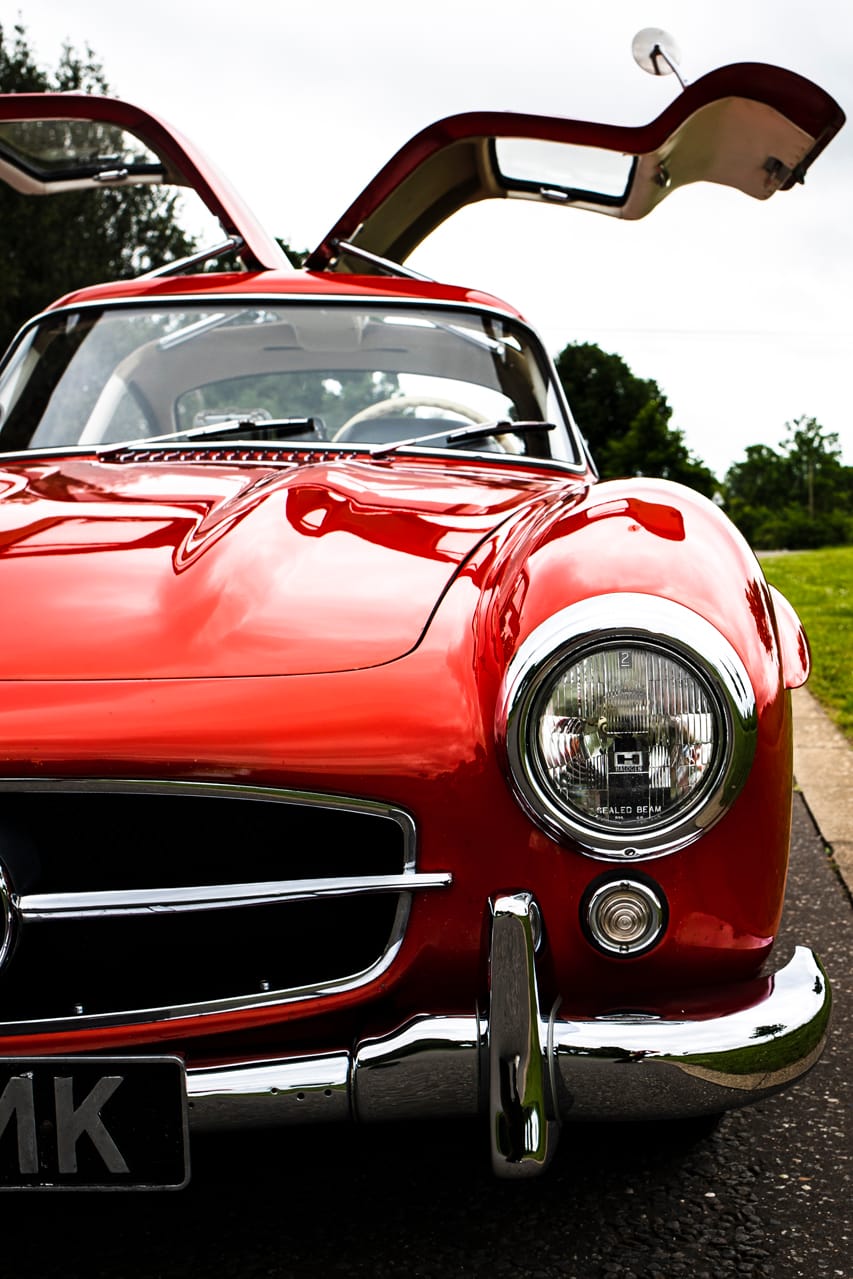 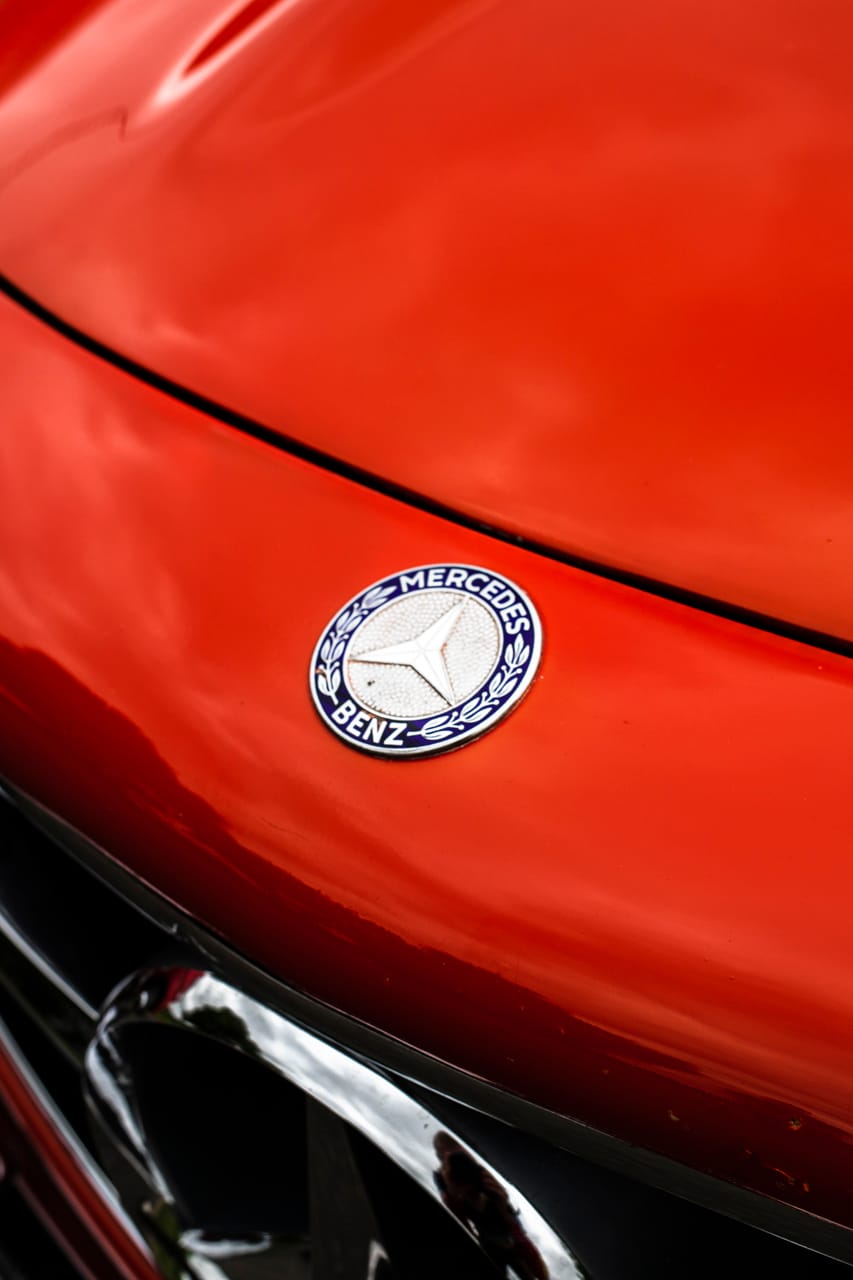 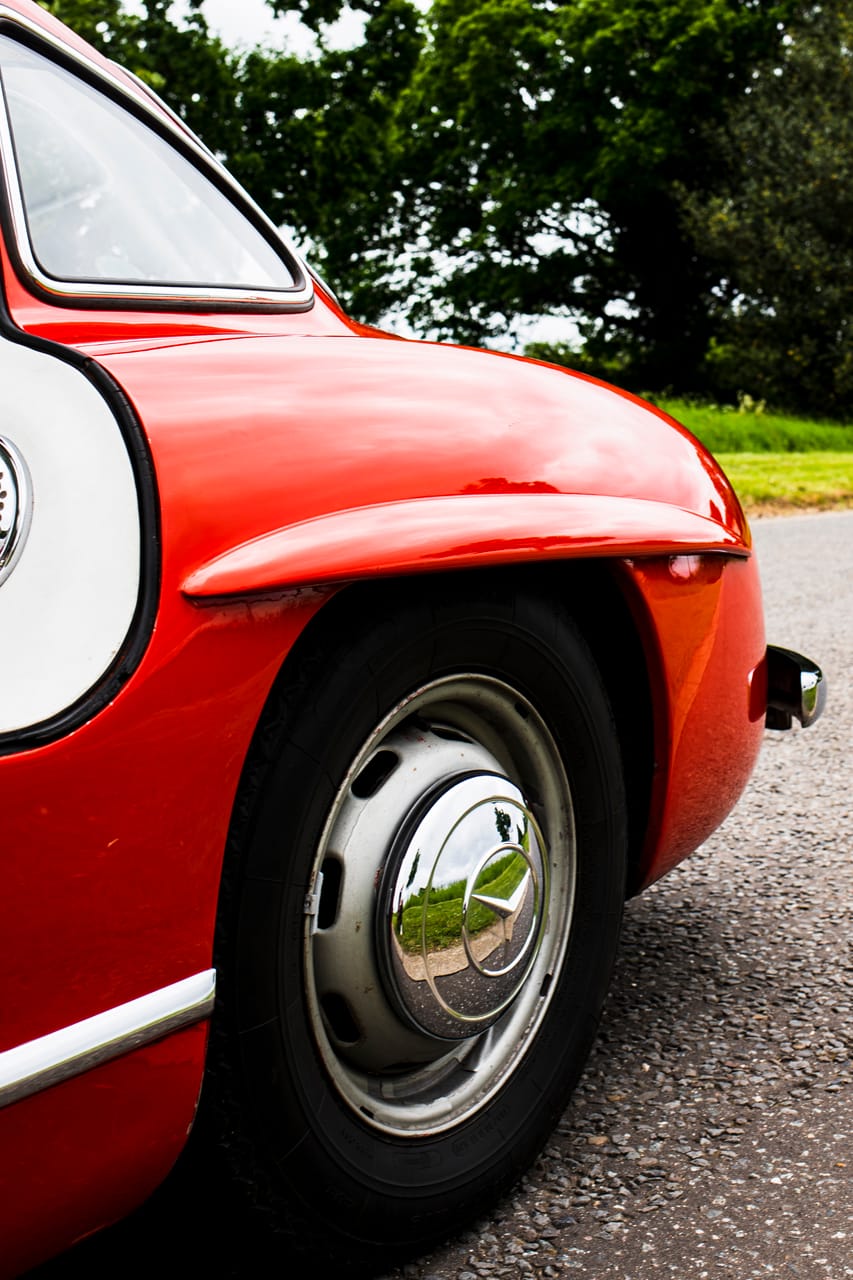 It founded Mercedes-Benz’s SL lineage and paved the way for many other marques to create cars based on their racing models. Test-driving one preserved example is a special occasion.

It’s hard to come to terms with the Gullwing’s superiority. You don’t want to speak badly of it, nor drive it with little care, making the Gullwing intimidating. But Hilton & Moss – a U.K.-based car dealer and classic car restoration company – were keen to hand over the keys to its unrestored (to the point of preserved) 300SL, softening the blow of the car’s $2M USD price tag.

Looking at images of the Gullwing is sure to whet the appetite of any car fanatic, but to behold the car in the flesh – face-to-face – brings so much anticipation and admiration to the surface. Opening the doors above your head, coordinating the awkward ingress of the deep door sills and stepping into a claustrophobic cabin, securing the steering wheel in place before turning the key and delicately pumping the gas as the car breathes into life is a ceremonial experience.

With the naturally-aspirated inline-six engine fired up, it’s time to set off. No driver aids, no power steering, rudimentary drum brakes and its reputation for being a widowmaker do not help with the nerves. All is soon forgotten when the Gullwing is gliding down the road in style and ease – as any Mercedes-Benz should, after all. 1 of 3 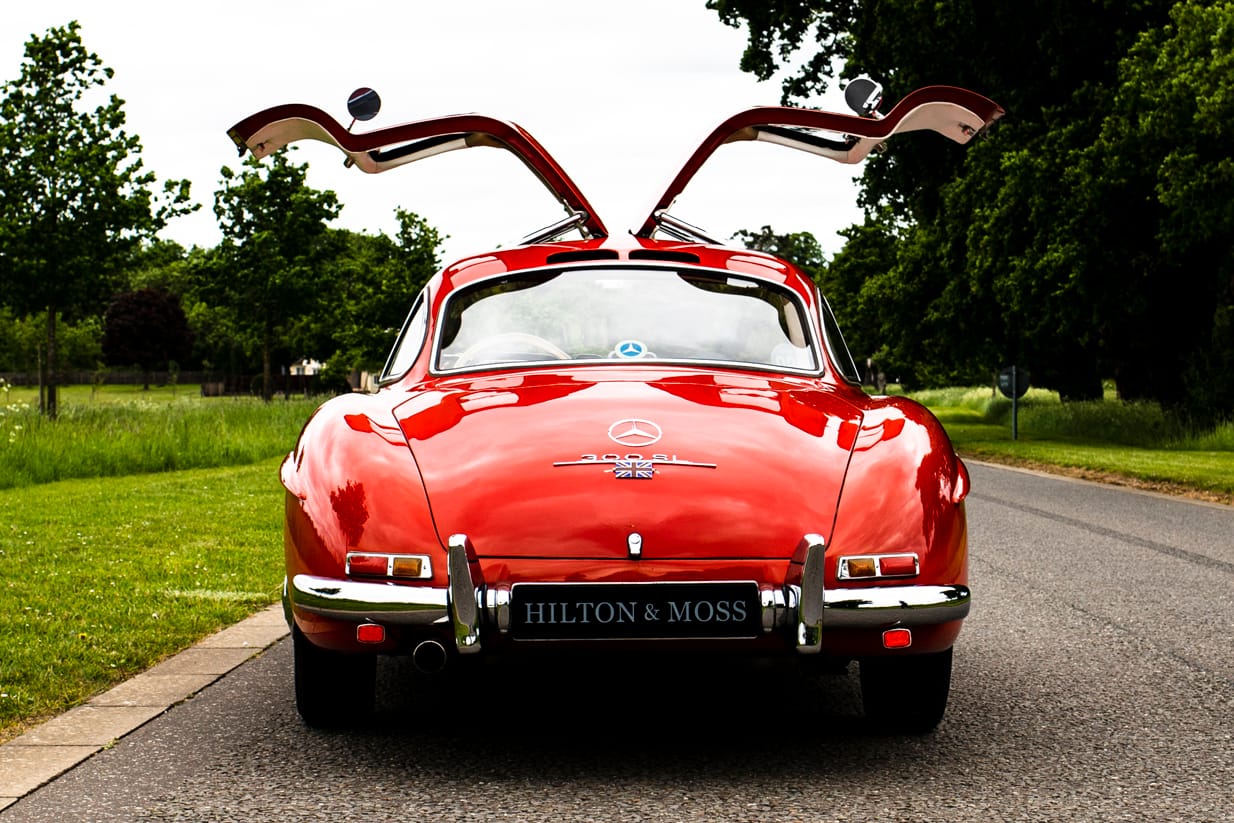 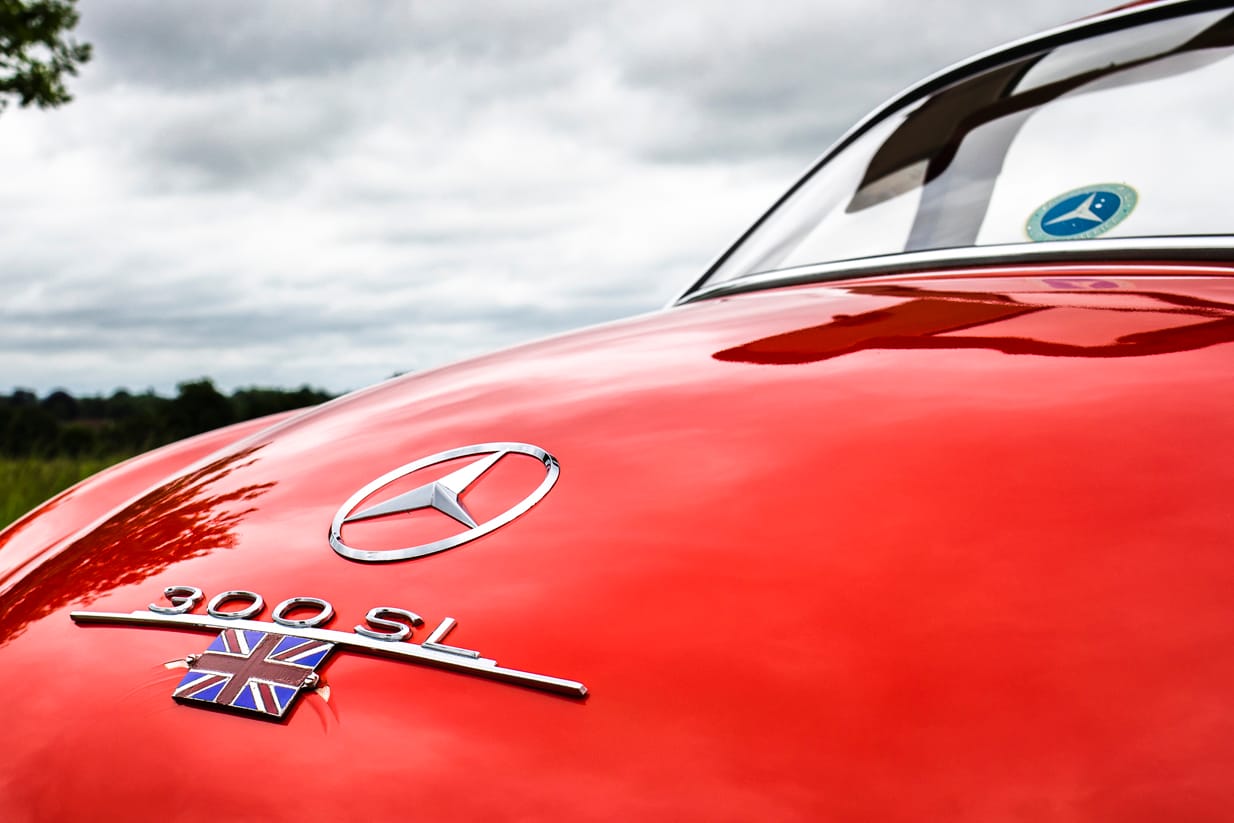 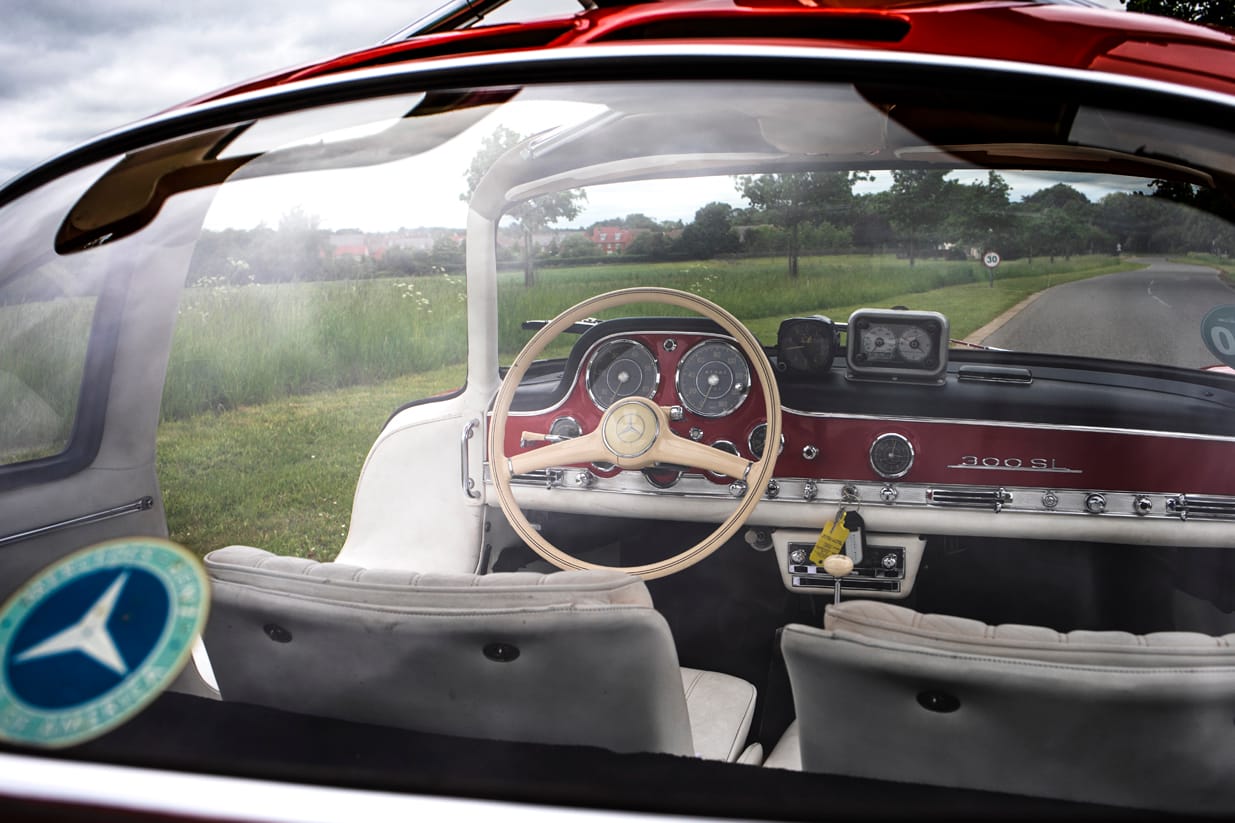 There’s a sense of ease with the Gullwing. Despite it being the supercar of its heyday, it ushers a welcoming presence once behind the wheel. You’re not encouraged to thrash the four-speed gearbox, nor put the pedal to the floor. Instead, the Gullwing wants you to glide through the corners, powering out of them onto straights with long stretches of torque pushing you to the limit slowly but surely.

HYPEBEAST tested the 300SL in the British countryside, but we could have easily mistaken our stint in the car for a cruise around Saint-Tropez. It’s about opulence, refinement and sophistication, all coming together in one of the most head-turning packages to ever grace the roads.

Our time in the Gullwing was far from the life the car had lived before us. It spent the first 16 years of its life in the States, mostly in a nailed-shut garage to prevent it from being stolen. It then spent 17 years elsewhere, before being bought and registered in the U.K. in 1989 for road rallies. Here, the car would obtain its ultra-rare second-generation Halda Speed Pilot period-correct rally clock. Soon after it was bought by offshore royalty but kept in the U.K., and today it sits with Hilton & Moss, which is offering it in this “preserved” condition. 1 of 4 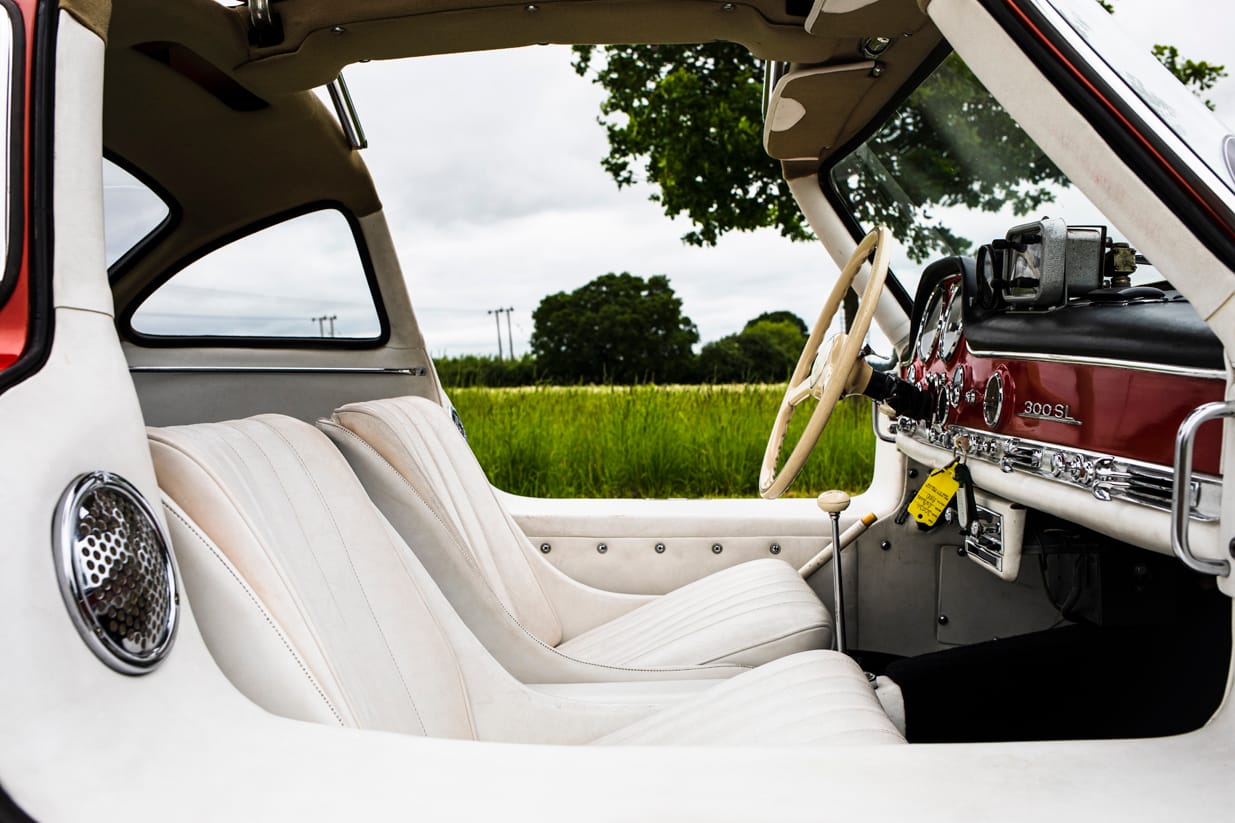 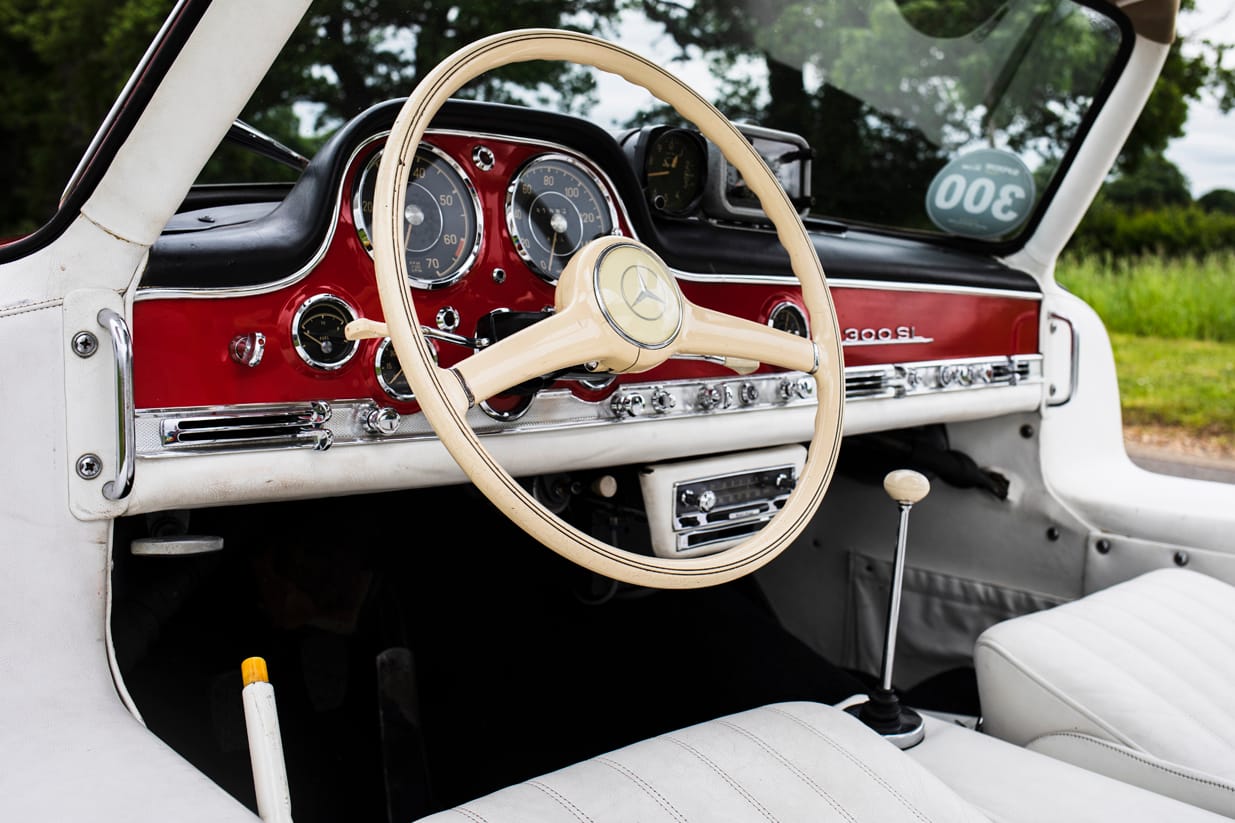 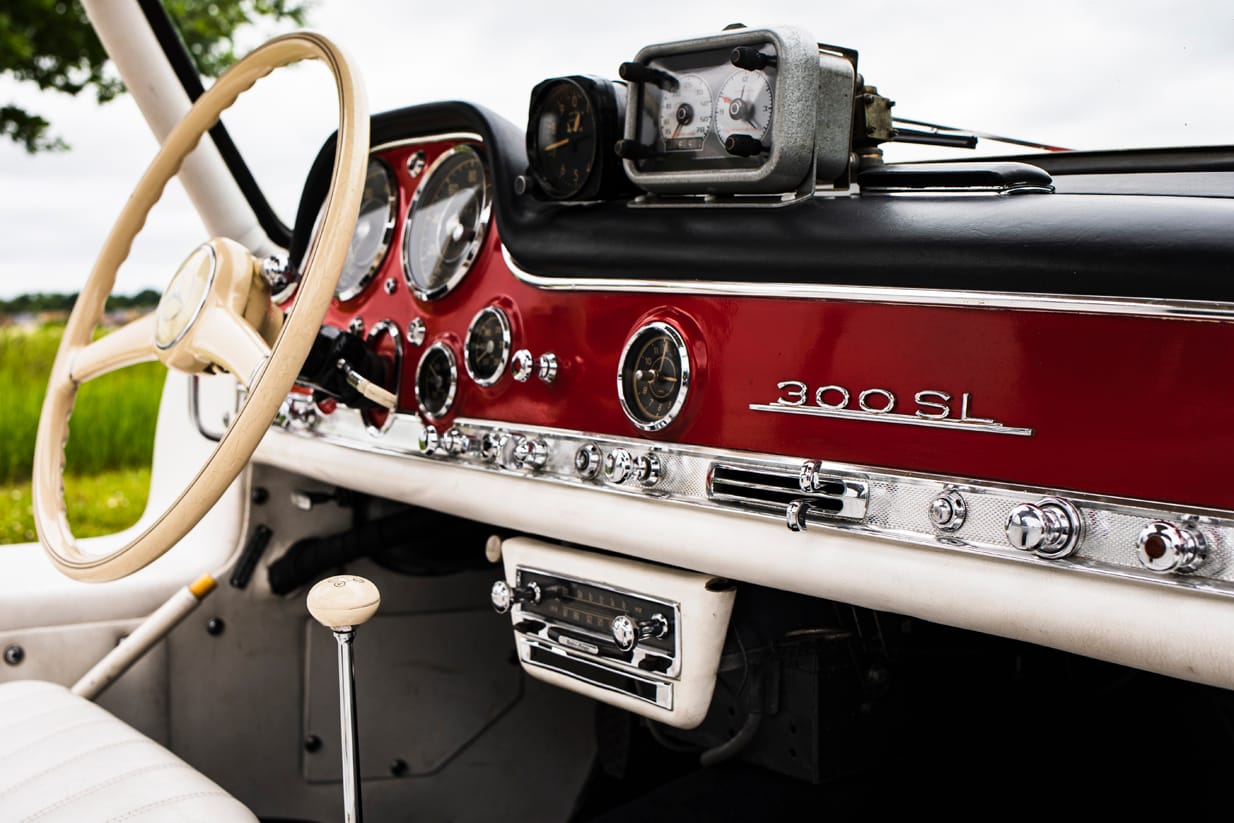 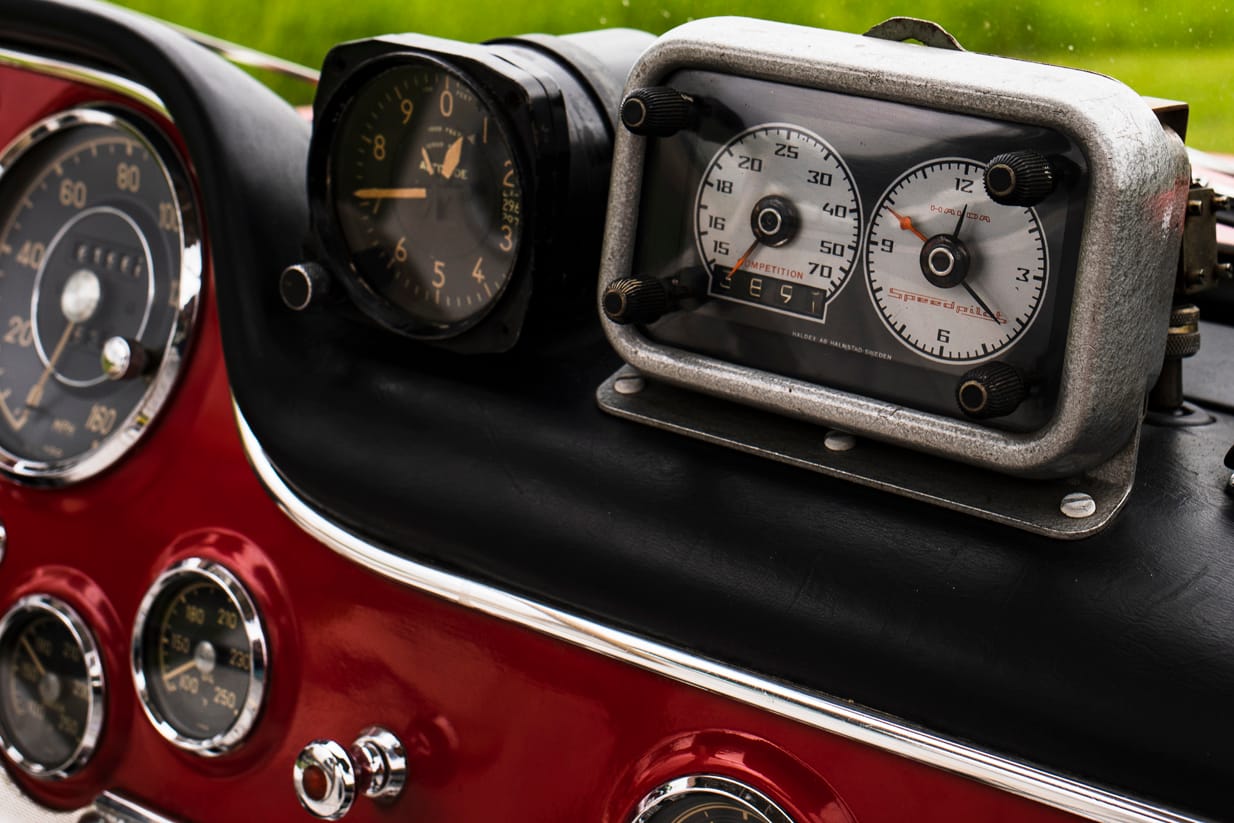 The minor nicks, dents and scuffs can be forgiven as they only add to the car’s personality. A mild patina graces the car’s exterior and interior, but the engine still starts every time with the turn of a key. These attributes tell a story about a car that’s already so well documented, and give this particular 300SL a tangible attitude.

Driving the Mercedes-Benz 300SL Gullwing is a performance for the onlookers, of which there are many. Young or old, passers-by will stop and stare in awe while you, inside, feel like the coolest person in the world even if you’re just plodding ironically casually down a twisting road as we did.

It’s a car worthy of all of the praise the industry holds a candle to. Seldom does a near-70-year-old car stand the test of time like the Mercedes-Benz 300SL Gullwing. From the design to the engine, the way it drives to how it makes you feel, what it means to the owner and to those who see it, how much it’s worth today and how much it has impacted the overarching industry, it’s hard to quantify the legend that is the Gullwing. It’s simply just a pleasure to have been in the driver’s seat.
Source: Read Full Article