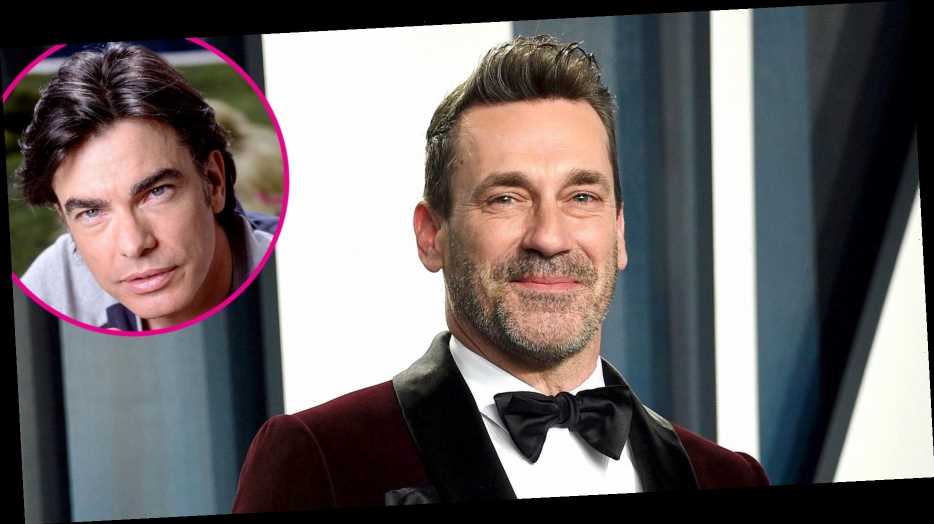 Don Draper, who? Before Mad Men made him a household name, Jon Hamm could have been known for playing some of the most beloved dads in teen drama history.

Stars Who Turned Down Major Movie and TV Roles

The Missouri native, 49, reflected on some of the first gigs he auditioned for during a new episode of Rolling Stone‘s “Too Long, Didn’t Watch” podcast and revealed that he went up for the role of Sandy Cohen on Fox’s The O.C. in the early 2000s.

“I was probably 31 or 32,” Hamm recalled on the Tuesday, January 12, podcast episode. “I think it was me and Harry Hamlin [auditioning].”

Peter Gallagher ended up securing the role and portrayed Sandy Cohen — the father of Adam Brody‘s character, Seth — for four seasons between 2003 and 2007. At the time of his audition, Hamm felt like he was too young to be a convincing on-screen dad.

“I remember walking in and going, ‘Is that Peter Gallagher? Why am I here?’” he said on Tuesday. “I love Peter Gallagher, but I was just like, ‘Dang!’ … I never looked young enough to be in high school, even when I first got out [to L.A. when] I was 25, so I missed out on all of the Dawson’s Creek and all the early WB shows. So then they were like, ‘Come play one of the dads,’ but I wasn’t old enough to be that, either. I had to wait around a long time.”

Sandy Cohen wasn’t the only fictional father figure that the Baby Driver actor had his sights set on. Hamm, a closet Gossip Girl fan, would have liked to have nabbed Matthew Settle‘s role as retired rocker Rufus Humphrey on the classic CW series.

Eventually, Hamm found his perfect role when he was cast as advertising executive Don Draper in AMC’s Mad Men, which aired from 2007 to 2015. Two years after the award-winning show came to an end, Hamm admitted that he wasn’t planning on returning to the iconic character anytime soon.

“It’s a drag pretending to be somebody that’s so bummed out all the time,” he told Willie Geist during a June 2017 Today interview. “I definitely didn’t have a strategy [after the finale]. The only thing I knew I didn’t want to do was play Don Draper again.”

Sticking It Out! Stars Who Almost Quit Their Acting Careers

To Mad Men fans’ disappointment, Hamm hasn’t changed his mind. While speaking with Entertainment Tonight in December 2020, the Richard Jewell star said he dreaded the possibility of a reboot.

“I’m of the belief that when a story’s told, it’s probably done being told,” he explained. “So I don’t know, maybe there’s another version of [Mad Men] out there somewhere, but I hope not.”