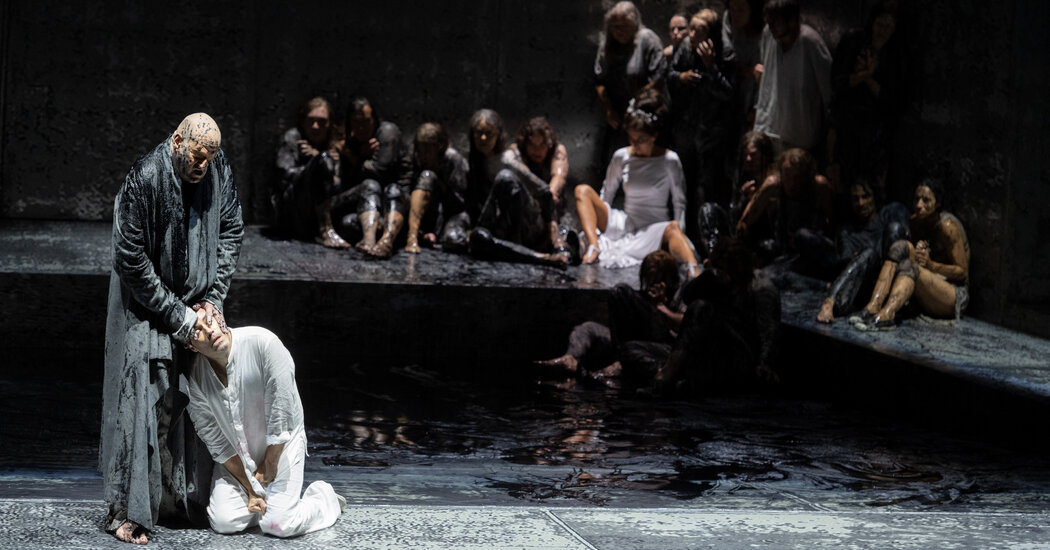 BERLIN — “The city reeks with death in her streets,” the chorus laments in Sophocles’ “Oedipus Rex.” Thebes is in the grip of a deadly plague. The king summons a prophet to divine the will of the gods, who accuses the monarch, “You are the cursed polluter of this land.”

The theme of nature striking back, revolting against unnatural acts, is one that resonates 20 months into the Covid-19 pandemic and after a summer of climate-change-related extreme weather events, including flooding in Germany, deadly heat waves in Canada and fires in Greece.

All that may help explain why, at the beginning of the theater season in Berlin, Sophocles’ tragic hero, the original mama’s boy, has been center stage in a quartet of new productions at some of the city’s leading companies.

Arguably the most eagerly awaited was Maja Zade’s new play, “ödipus,” a contemporary reworking of the myth, which premiered at the Athens Epidaurus Festival this month and recently transferred to the Schaubühne. Michael, a young employee at a German chemical company, is dating his much older boss, Christina. Their relationship begins to fray over the handling of an investigation into a chemical spill, and Michael learns that the accident also caused the death of Christina’s first husband. Several revelations later, Michael puts two and two together and realizes that — spoiler alert — he killed his father and slept with his mother.

Any hint of ancient Greek cosmology is scrubbed clean from Zade’s version. The most explicit reference we get to myth in Thomas Ostermeier’s sleek and sterile production is a small statue of a sphinx perched on a kitchen counter. Jan Pappelbaum’s sparse set, framed by neon lights, has a sitcom-like realism. The dialogue, dispatched by the four-person cast around the kitchen table or a backyard grill, is stiff and largely functional. The actors struggle more against a poorly made play than they do against fate.

The only one who succeeds is Caroline Peters as Christina, who, even more than her young lover, is the center of Zade’s play. Peters shows her talent for transcending mediocre dramatic material just as she did in the recent Schaubühne production of Simon Stone’s “Yerma.” At the climax of the production, she explains the awful truth to Michael. Her face is projected in close-up on a screen (the only time that the intermittent video serves a purpose), allowing us to register her every twitch during the lengthy speech. She pulls off the tricky monologue like a doctor steeling herself to give a patient a terrible diagnosis, putting aside her bedside manner because there’s no way to sugarcoat a revelation this horrific.

Along with the gods and fate, Zade’s play also dispenses with the chorus, a mainstay of Greek drama, who provide a collective counterpoint to the individuals at the center of the drama. Chanting in unison, they also fill in background information and comment on the action, serving as something of a conduit between the main actors and the audience.

This chorus, on the other hand, assumes center stage in the Deutsches Theater’s highly ritualistic “Oedipus,” a largely faithful production of Sophocles’ play directed by Ulrich Rasche. The contrast in tone and style with the down-to-earth realism of Ostermeier’s production could not be more striking.

Rasche has devised an extremely precise mode of Maschinentheater, a theatrical approach that relies heavily on elaborate scenic elements and stagecraft. His industrial and dark productions derive much of their sweaty vitality from intense physical performances and droning music. His “Oedipus” is based on an 1804 translation by the German Romantic poet Friedrich Hölderlin, whose language is archaic and pungently lyrical. The cast, treading in place on a constantly rotating stage, enunciates the text crisply and with studied intensity.

Nico van Wersch’s score includes an electric bass, Moog synthesizer and microtonal keyboard. The chorus chants in unison, creating a percussive atmosphere that harmonizes with the concentric rings of color-changing fluorescent lights that tilt from the ceiling. The effect is arresting for the first hour, but then quickly turns soporific. Rasche takes his time — just shy of three hours — and the slow-moving production is maddeningly deliberate.

The British composer Mark-Anthony Turnage was a 20-something upstart in 1988 when he wrote “Greek,” which recently opened the Deutsche Oper Berlin’s season. This short, two-act opera is many things, including a scathing political and social commentary about Thatcher-era England and a self-conscious sendup of opera as an art form that, at its origin, sought to resurrect the spirit of ancient Greek drama.

A spunky and potty-mouthed comic strip opera, “Greek” transposes the action from ancient Thebes to East London. Oedipus becomes Eddy, an angry young working-class man looking to better himself while fleeing a horrible fate predicted by a carnival fortune teller that has become a running gag in his family.

In the Deutsche Oper’s parking lot (a corona-averse location also used last year for a reduced production of Wagner’s “Das Rheingold”), four singers pranced and strutted in the young German director Pinar Karabulut’s cartoonishly campy production, wearing colorful variations on ancient Greek garb, down to orange, purple and green curly wigs and beards. There’s a fair amount of spoken text, which the members of the all-American cast dispatched with exaggerated cockney accents when they weren’t belting out the eclectic score, which careens from dance hall crudeness to poignant lyricism.

Turnage’s irreverent work is one of the more recent musical versions of the Oedipus myth, a list that includes Stravinsky’s 1927 “Oedipus Rex” and the Doors’ “The End.” Among the most powerful is George Enescu’s 1936 opera, “Œdipe,” an underperformed 20th-century masterpiece that recently opened the Komische Oper Berlin’s season. (In a rare coincidence, a new production of the opera also kicked off the season at the Paris Opera.)

The Kazakh director Evgeny Titov’s surreal production is far and away the most brutal of Berlin’s Oedipal offerings. The set resembles a derelict madhouse and is frequently awash in blood, from the tragic hero’s difficult birth to his transfiguring death in Colonus. In between are graphic depictions of Laius’ disembowelment and of Oedipus putting out his own eyes.

Enescu’s musical language fuses various early modernist styles with traditional Romanian melodies and harmonies, which the orchestra of the Komische Oper, under the baton of its general music director, Ainars Rubikis, performs with assurance and intensity. The lengthy title role features ample Sprechgesang, a vocal style halfway between song and speech. The British baritone Leigh Melrose’s searing performance is as much a dramatic feat as it is a musical achievement. Of all the Oedipuses haunting the German capital, his is the most affecting, tragic and believable.

Enescu began writing “Œdipe” shortly after Sigmund Freud first theorized the Oedipus complex, and the composer’s Oedipus is an archetype of modern man who, despite his quest for knowledge and self-understanding, is blind to himself, incapable of outrunning destiny and the agent of his own destruction.

Is it any wonder that some of today’s leading theatermakers have turned to this 2,500-year-old existential detective story as we grapple with the catastrophes affecting our bodies and our planet? Like the ancients, we get the myths we deserve, not the ones we want.