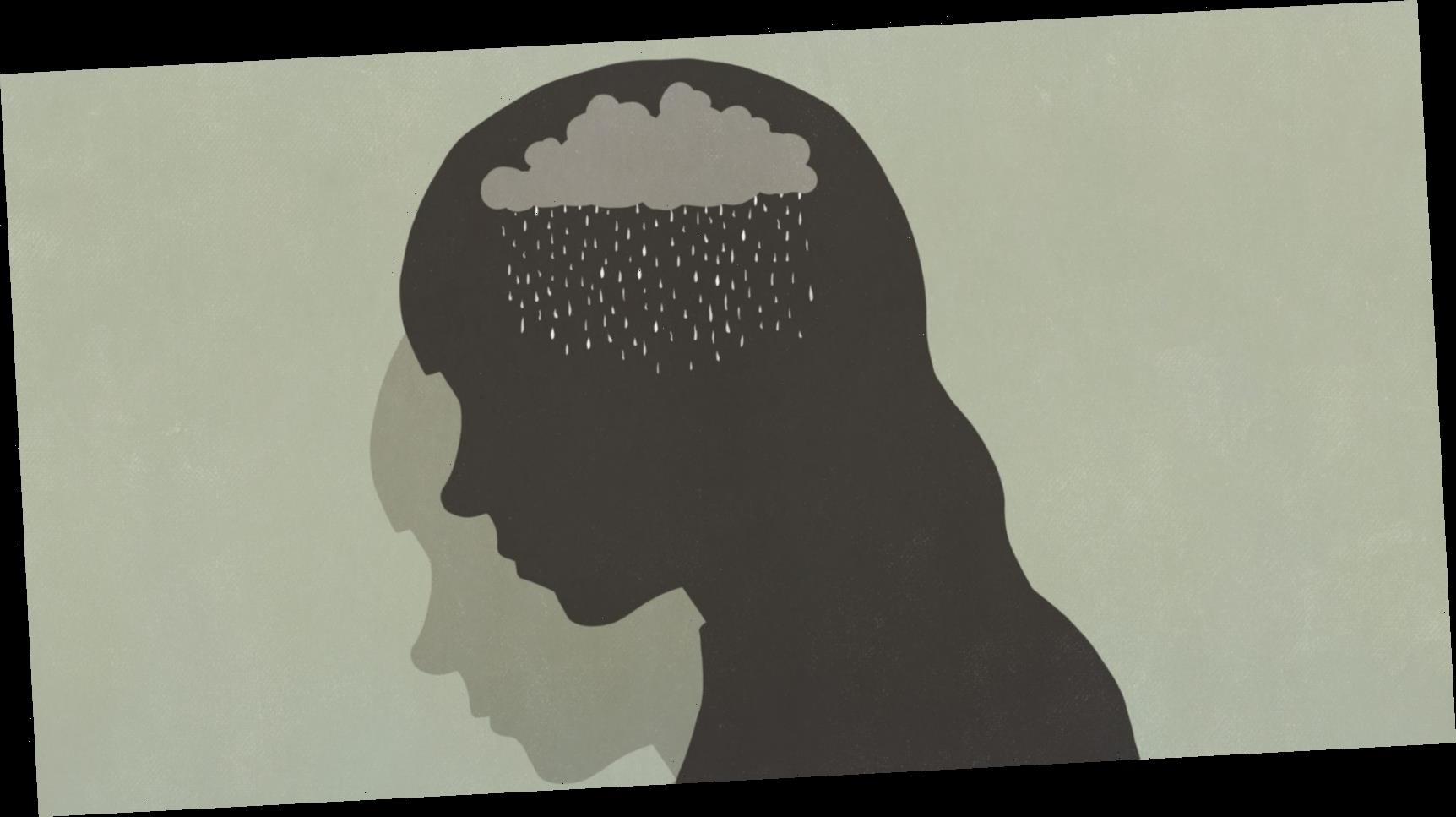 In our new series, There’s A Podcast Episode For That, we dig deep into the podcast archives to find the best answers for some of life’s biggest questions. This week, we share the best podcast episode for anyone who’s struggling to talk to their friends about grief.

Grief is a sensation that’s almost impossible to put into words. It grabs hold of you, grips on tight, and makes you feel as if you’re going slightly mad for myriad reasons (personally, this writer can recall a not-so-great moment when she walked into a supermarket to buy ingredients for dinner, and wound up sobbing uncontrollably in the cereal aisle).

The one that stands out the most, though, is the seemingly impenetrable wall that grief can throw up between us and the people around us. And this inability to connect can, unsurprisingly, knock us off kilter. Human connection is, after all, vital – not just because it plays an important part in recovering from trauma, but because we need it to thrive

Grief shaming: why you should never judge someone for grieving in their own way

As someone who’s been on both sides of that difficult first conversation after a painful loss, I know firsthand how difficult it can be to find the words to express how you’re truly feeling. To find the words to support the person who’s falling apart in front of you. To stop yourself from putting on a brave face. To listen and love with all your heart, no matter how much you might want to breeze on by to another less troubling subject.

To be fair, knowing the right thing to say doesn’t come naturally. We’re not taught the skill, because our society generally avoids talking about death and grieving.

But thankfully, The Adam Buxton Podcast – in which our eponymous host interviews comedians, actors, writers and musicians over the course of an hour’s “ramble chat” – has gifted us a truly beautiful example of how to navigate conversations such as these, and how to navigate them well.

Recorded not long after the death of Buxton’s mum, Valerie, episode 126 of the podcast series sees Buxton sit down with his erstwhile comedy partner and oldest friend, Joe Cornish.

For a while, they talk about lockdown – with a particular focus on the TV shows they’ve binged and loved (or hated, in some cases). About 28 minutes into the conversation, though, Cornish gently takes it upon himself to address the elephant in the room.

Adam Buxton discusses the loss of his mother with his old friend, Joe Cornish.

“But hey, how are you doing, man?” Cornish asks his friend. “How are you feeling? What’s the weather like in your head?”

“Real answer,” Cornish reassures him. “Or whichever answer you feel most comfortable giving me.”

Coronavirus UK: understanding the 3 main reactions to the rise in Covid-19 cases

The resulting conversation is… well, it’s silly and heart-warming and shattering all at once. And so when I listened to it myself – headphones plugged in, out on my daily walk, expecting the usual hilarious rambles from my beloved Buxton – I had to stop, hit pause, take a breath, and wipe my own traitorous tears from my eyes.

Let them feel what they need to feel

I suppose the thing that makes it stand out so much from all those scripted dramas is this; it feels normal. Both Buxton and Cornish are treading unfamiliar ground, despite being with someone they’ve known for years, but they don’t shy away from any of the strange concoction of emotions that come pouring out when you address a loss.

“Mum died very unexpectedly and I was totally sideswiped by it,” admits Buxton. “She was already ill… but we thought she’d kind of got on top of it, and it was being dealt with and treated successfully and managed by the wonderful NHS.

“She was discharged from hospital after three days, but the second night she was back with us, she died. And it was quite bad. I mean, it was obviously bad. But it was really bad because I didn’t expect it… and so I was left shocked, and bereft in every way. But I was also left feeling like, ‘shit, I didn’t help.’”

In the beginning, the waves of grief are 100 feet tall and crash over you without mercy

Don’t use jokes as avoidance tools

“It sort of crossed my mind that, god, this doesn’t look very good,” he says. “Like, I immediately killed my mum. I picked her up and next podcast it will be me saying, ‘you’re probably all wondering how my mum’s doing. Well, she died.’”

“I don’t think anybody would see it like that,” cuts in Cornish.

In keeping it serious here, he reminds Buxton that it’s not on the podcast host to entertain him during this conversation; he can say whatever he needs to. And, in the process, he helps guide his friend into talking about how he’s really feeling, too.

“I still can’t believe this is happening”: will we ever stop being shocked by Covid-19?

… but do laugh when you need to

Of course, Cornish later goes on to make jokes and laugh with Buxton during the conversation – hell, he even takes on the persona of a German therapist at one point. And in doing so, he acknowledges the wealth of emotions and feelings that come with grief, and allows Buxton a chance to enjoy the space between the ‘waves’.

“In the beginning, the waves of grief are 100 feet tall and crash over you without mercy,” reads one incredibly profound Reddit post on loss. “They come 10 seconds apart and don’t even give you time to catch your breath. All you can do is hang on and float.

“After a while, maybe weeks, maybe months, you’ll find the waves are still 100 feet tall, but they come further apart. When they come, they still crash all over you and wipe you out. But in between, you can breathe, you can function… [then], somewhere down the line, and it’s different for everybody, you find that the waves are only 80 feet tall. Or 50 feet tall.

“And while they still come, they come further apart, you can see them coming. An anniversary, a birthday, or Christmas, or landing at O’Hare. You can see it coming, for the most part, and prepare yourself. And when it washes over you, you know that somehow you will, again, come out the other side. Soaking wet, sputtering, still hanging on to some tiny piece of the wreckage, but you’ll come out.”

At one point, Buxton breaks to go and gently chide his son, who’s begun playing drums loudly in an adjoining room (and disturbed the podcast in the process). Cornish fills the silence with a joke and, when Buxton returns, they begin talking about his son’s “enthusiastic” musical habits.

Despite the break in their flowing conversation, though, they soon get back onto the topic of Buxton’s loss. And as ‘Dr Buckles’ realises that his friend is still comfortable with him saying whatever he needs to say, he opens up more and more.

Indeed, he soon winds up sharing his thoughts, his feelings, and memories of his mother – unabashedly speaking in what he describes as a “wobbly crying voice” when he must, too.

“I just had it in my head that we were going to have another chapter… there would have been a few more moments,” he says simply, explaining that he’s been forced to “make peace with the fact that I’m not going to get that cinematic closure.”

What we all do share is the experience of a broken heart because we lost someone/thing we love.

And don’t make it about you

The big moment that stands out most of all for me in this podcast is when Buxton reveals that he’s made plans to “talk to a therapist for the first time.”

“I had a bit of therapy,” replies Cornish. “I liked it a lot. I find that you tend to know the answers already, but it’s extremely liberating to be able to say anything you want to somebody you don’t really know, and you know it’ll be in strict confidence. And they’re very good at asking you questions back that make you think about things clearly, and not get tangled up in stuff.

“I found CBT very useful… and meditation was very useful, just in terms of viewing your mind as an organ that can sometimes deceive and be destructive to you.”

It’s the first and only time that Cornish shares a comparative experience with Buxton; he doesn’t talk about his own losses, nor does he talk about his own encounters with grief – and that’s because grief is, above all else, messy and confusing and uniquely individual to the person experiencing it.

Psychology: you’re not the only one feeling “meh” right now – this theory explains why

As clinical professional counsellor Nick Frye writes in his article Self-Care in Grief: The Myth of Keeping Busy: “Isn’t it…true that every relationship is unique and therefore we all have our own unique experience with grief? After all, even a well-meaning friend who has had a parallel loss does not know how you feel.

“What we all do share is the experience of a broken heart because we lost someone/thing we love.”

Listen to episode 126 of The Adam Buxton Podcast below: