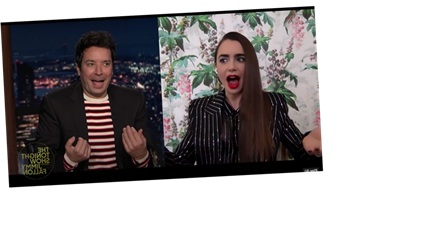 If you’ve seen “Emily in Paris,” you know the titular Emily didn’t always have the greatest grasp of the French language, so perhaps this will come as no surprise:

Last month, Netflix tweeted a revelation that had everyone realizing they had been pronouncing the title of the popular show wrong all along. “Emily in Paris” is supposed to be pronounced with a French accent so Emily rhymes with Pah-ree, according to Netflix.

The tweet set off a social media firestorm (perhaps even bigger than any Emily created in the show). And on Monday’s “The Tonight Show,” Collins finally addressed it.

Talking about the pronunciation revelation, the actor and producer told host Jimmy Fallon: “When we were shooting in Paris, we heard people referencing as that more often, right? Because we’re in Paris, and the accent. I was like, ‘Oh yeah, it rhymes. That’s cute.’ Literally forgot about it. Came back home. It was never like a big thing. And then I felt like I was one with every single other person in the world that found that out the same day.”

Collins said she thinks her character would take it in stride, realizing she was just part of the joke. Though, who knows if she would’ve even realized the viral faux pas?

After all, supposed social media savant Emily’s attitude toward basic social media concepts is a bit, as the French might say, laissez-faire.

Watch Collins on “The Tonight Show” above.