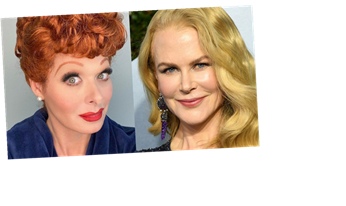 No longer content with feuding with just one fellow redhead, Debra Messing has her sights set on Nicole Kidman after the “Big Little Lies” star reportedly was cast as Lucille Ball in an upcoming Aaron Sorkin film.

Kidman will play the comedy icon in Amazon’s “Being the Ricardos” alongside Javier Bardem, who will portray Ball’s former husband and “I Love Lucy” co-star Desi Arnaz, according to Deadline. The film will tell the story of one week of production of the classic sitcom as the couple “face a crisis that could end their careers and another that could end their marriage,” the outlet reported.

Kidman’s casting sparked plenty of conversation online, with many questioning whether she’s the right fit for the role and offering their own suggestions. Cate Blanchett was previously set to star in the film.

Cue Messing, who nailed an impression of Ball’s “I Love Lucy” character on the final season of “Will & Grace” last year. She jumped into the controversy retweeting an endless stream of messages about why she should be in first position to star in Sorkin’s project.

″@DebraMessing is a better comedian. My opinion…,” read one of Messing’s retweets.

Others argued that Messing “definitely has more comedy chops” and that the sitcom star was “robbed” of the role because she would “hands down be the better option for Lucy.”

“Nicole Kidman is NOT RIGHT FOR THIS PART,” another fan wrote. “Debra Messing was born specifically to play this part. She can play comedy AND drama…Nic cannot. Plus LOOK AT DEBRA.”

“Nicole got enough damn jobs,” another wrote. “She on everything HBO has. Let someone else eat. Debra would smash this.”

And in case you wondered whether Messing was overlooked due to a scheduling conflict, she cleared that up immediately:

Messing also addressed a Variety interview from last year in which she declared she “would not even touch” offers to play Ball in a film because the star is simply “untouchable.”

While it’s unlikely the social media outcry will actually get Messing cast in the film, she does have one key supporter.

In the same Variety interview, Messing recalled that Ball’s daughter, Lucie Arnaz, gave her a stamp of approval behind the scenes of the special “I Love Lucy” tribute episode of “Will & Grace.”

“I was in the green dress. We were about to shoot the song and dance [number] and she walked in and she just looked at me and didn’t say anything.” Messing recalled. “Then she hugged me and she said, ‘This feels really good. It’s been a long time since I’ve hugged you,’ and everyone started to cry.”

“And then she smiled and she said, ‘I know how long you’ve been wanting to do this, Debra. And I’m so glad we were able to make it happen.’” And then I had to go [to the stage],” she continued. “As I walked away, she said, ‘Break a leg, Mom.’ Everybody just flipped out and cried. It was really moving.”