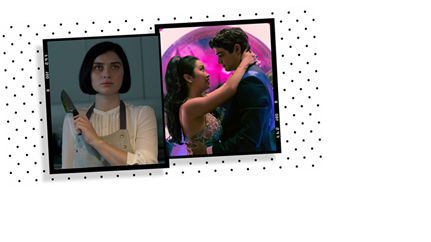 There is an abundance of new TV shows and films coming to Netflix this February, including Behind Her Eyes, To All The Boys: Always And Forever, and Crime Scene: The Vanishing At The Cecil Hotel.

The new year is well and truly in full swing, which means we have an abundance of new films and TV shows coming to Netflix.

February’s line-up is packed to the brim with absolute gems, including the much-anticipated Behind Her Eyes – which, as you’ve probably guessed, is an adaptation of Sarah Pinborough’s bestselling novel of the same name (the one with the WTF ending).

True crime fans, meanwhile, will want to watch Netflix’s series about the tragic case of Elisa Lam. And there’s also Strip Down, Rise Up, a documentary on the wide-ranging benefits of taking up pole dancing and how it’s helped women deal with trauma and body image issues.

Best TV shows of 2021: the 35 must-watch series coming to our screens

Elsewhere, we have the third and final installment in the To All The Boys franchise, a sweeping drama about female friendship in Firefly Lane, and spine-tingling thriller Red Dot.

Throw in a few old favourites (we’re thinking Mean Girls) and you truly have something for everyone to enjoy.

With that in mind, then, here’s our pick of what’s new on Netflix this February.

Please note that this article will be updated regularly to include new titles.

You really don’t need me to explain this one to you: Cady (Lindsay Lohan) leaves Africa for a new life in the USA, is thrown into the deep end at her local high school, and immediately captures the attention of ‘The Plastics’, a group of social elites led by the one and only Regina George (Rachel McAdams). And, yeah, you better believe things get even worse when she finds herself falling for Regina’s ex…

Parks & Recreation is all about Leslie Knope (Amy Poehler), a hard-working politician, optimist, feminist, and champion of female friendship. It’s also, though, one of the funniest and most uplifting shows ever shown on TV, making it the ideal antidote to all the world’s miseries right now.

Keeping up those feel-good vibes comes the second season of Emmy-nominated stand-up comedy series, They Ready. For those of you who didn’t catch it the first time around, the concept is simple: our beloved Tiffany Haddish introduces six of her absolute favorite comedians to the world, via a series of hilarious half-hour stand-up comedy specials.

If you loved Beaches, then you’re going to be obsessed with Firefly Lane, which charts the enduring bond between two inseparable best friends (Katherine Heigl and Sarah Chalke) over four tumultuous decades. So, yeah, it’s going to make you cry. A lot.

All My Friends Are Dead  – 3 February

The clue’s in the name with this Polish film, which begins as two detectives enter a house full of dead bodies on New Year’s Day. But, while they’re unable to determine the cause of the massacre, we are suddenly rocketed back in time to the night before, as a crowd of friends gather to celebrate New Year’s Eve in style…

Based on Onmyōji, a Japanese fantasy masterpiece by Baku Yumemakura, this epic Netflix Original film tells the story of Abe no Seimei, the most renowned yin-yang master during the Heian period, and his fantastical encounters with demons and evil spirits.

New on Netflix: 22 new TV shows have been announced, and we’re 100% into them all

We don’t know all that much about this one, other than a) it’s set in 1950s Italy, and b) it sees a passionate free spirit’s world turned upside down by a forbidden affair. And, to be honest, that’s all we really need to know, right?

Strip Down, Rise Up – 5 February

From Academy Award-nominated director Michèle Ohayon comes Strip Down, Rise Up, an intimate documentary film about a diverse and vibrant group of women who heal their trauma and body image issues through sensual movement and the art of pole dancing.

Filmed entirely in lockdown, this achingly romantic drama sees filmmaker(John David Washington) and his girlfriend (Zendaya) head home together after attending his first film premiere. As he awaits what he assumes will be imminent critical and financial success, though, the evening suddenly takes a turn as revelations about their relationships come to the surface, pushing the couple to their limits and putting their love to the absolute test.

In Carlos Saldanha’s first live-action series, an environmental police officeris drawn into a battle between the real world and an underground realm inhabited by magical creatures spoken about in Brazilian folklore.

Quite possibly the biggest Korean release on Netflix to date, this sci-fi adventure rockets us forwards through space and time to 2092. There, we follow the crew of the spaceship Victory as they salvage debris from the darkest depths of the universe… only to stumble across something completely unexpected. Song Joong-ki, Jin Sun-kyu, Kim Tae-ri, and Yoo Hai-jin star.

Crime Scene: The Vanishing At The Cecil Hotel – 10 February

“For nearly a century the Cecil Hotel in Downtown Los Angeles has been linked to some of the city’s most notorious activity, from untimely deaths to housing serial killers,” reads the synopsis for this true crime series.

“In 2013 college student Elisa Lam was staying at the Cecil when she vanished, igniting a media frenzy and mobilising a global community of internet sleuths eager to solve the case. Lam’s disappearance, the latest chapter in the hotel’s complex history, offers a chilling and captivating lens into one of LA’s most nefarious settings.”

In need of another romcom? Well, ‘tis the season, so get stuck into this story about school teacher Monika (Adrianna Chlebicka), who maintains a secret double life as a model ( “Klaudia”) to pay off her father’s debts. During a photoshoot, she meets womaniser and journalist Enzo (Mateusz Banasiuk), who has been forced to appear in the commercial by his boss. And, yeah, you better believe it’s hate at first sight…

If you prefer your crime dramas on the dark side, check out Capitani. In the first episode, the body of a teenage girl is found in the forest near the rural village of Manscheid, deep in the North of Luxembourg. And it’s up to detectives Luc Capitani (Luc Schiltz) and Elsa Ley (Sophie Mousel) to uncover the grisly truth behind the killing before their 12 episodes are up…

Netflix’s first full feature film from Sweden, Red Dot begins simply enough: David (Anastasios Soulis) and pregnant Nadja (Nanna Blondell) decide to travel to the magnificent expanses in the north of Sweden for a ski hike. The aim? To rekindle the embers of their relationship, of course.

Horrifyingly, though, things don’t turn out that way, as a hunter’s red laser dot appears in their tent and they are quickly forced to flee into the cold, unforgiving wilderness. Totally isolated in the mountains, things fall apart rapidly as the duo find themselves pursued by reckless shooters. And, worse still, it isn’t long before the couple’s past soon comes back to haunt them, too.

To All The Boys: Always And Forever – 12 February

As if you needed anything more after that spoiler-heavy trailer, To All The Boys star Lana Condor has promised that the final installment of this sweet romcom franchise will see her character make some very, very difficult choices.

As she told The Hollywood Reporter: “It’s her senior year, so she’s trying to figure out actually what she’s going to do for her future, like making choices for what’s right for you versus what you want in the moment because you want to stay with something. That’s super difficult, right?

“What I can say is she faces some real, real life choices. What I love about the third movie is she fully comes into her own. It’s a full beginning, middle, end, and for me, that was great as an actor because I had all the time in the world to play and to grow and to feel good with the way that we ended things.”

Best celebrity cameos: 24 film and TV crossovers guaranteed to surprise and delight all who see them

What would you do if you shared a passionate kiss with someone, only to walk into work the next day and discover that they’re your new (and married) boss? That’s exactly what happens to single mother Louise (Simona Brown) in Behind Her Eyes, although things take a turn for the even weirder when she finds herself befriending Adele (Eve Hewson), who just so happens to be the wife of the aforementioned boss (Tom Bateman).

No spoilers, because this psychological thriller series boasts the biggest WTF ending of all time, but it’s not long before our girl finds herself caught in a tangled web of secrets and lies where nothing is what it seems. And, yes, you better believe there’s a very dangerous spider making its way towards her, too…

The year is 2074 and, in the wake of a mysterious global disaster, war rages between the Tribes that have emerged from the wreckage of Europe. Our story, though, focuses on three siblings from the peaceful Origine tribe – Kiano (Emilio Sakraya), Liv (Henriette Confurius) and Elja (David Ali Rashed), who find themselves separated. Thus, they are forced to forge their own paths in an action-packed fight for the future of this new Europa.