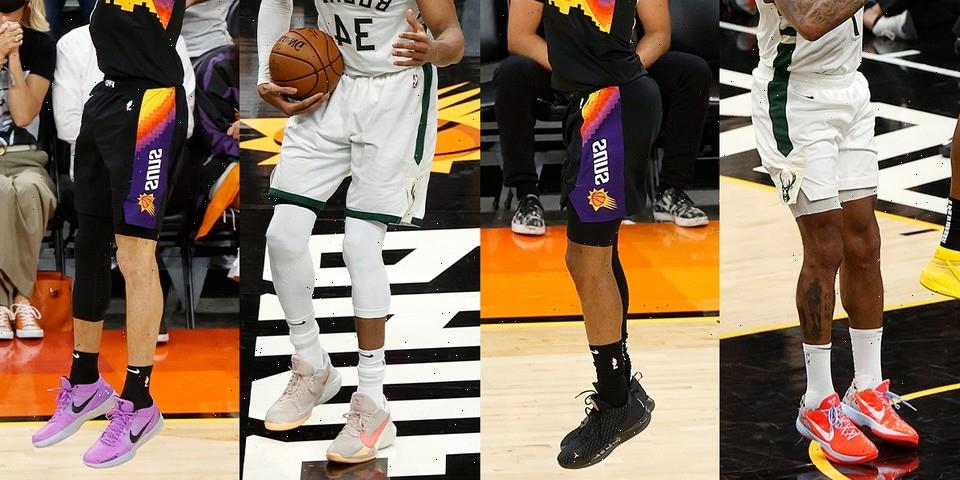 The 2021 NBA Finals have officially begun. The Phoenix Suns faced off with the Milwaukee Bucks, coming out of Game 1 victorious with the score 118-110.Suns’ big three Devin Booker, Chris Paul and Deandre Ayton came out clutch, dominating the court and putting their individual stamps on the game. CP3 hit a game-high of 32 points while DBook scored 27 and Ayton finished with 22 points. The Bucks were led by Giannis Antetokounmpo, Khris Middleton and Brook Lopez, but still came up short in the final stretch of the game.

The players have noticeably upped their shoe game in both team’s debut NBA Finals game. PJ Tucker headed into Game 1 with a pair of Nike Kobe 6 Protros in an unreleased coral-orange colorway that features a floral print. On the opposing team, Booker also came out sporting a pair of Nike Kobe 4 Protros that many fans have spotted in the recent play-offs. The purple shoes have been synonymous with his success and feature the quote “Be Legendary,” a phrase the late Kobe Bryant said to the young player. The phrase is also tattooed onto Book’s arm as an homage to the Black Mamba. CP3 walked on court with a pair of classic, black Jordan CP3 XIIs with the phrase “Can’t Give Up Now…” written on the midsole of the shoe. Antetokounmpo is seen in a pair of Nike Zoom Freak 2s in a pastel colorway that sees the Swoosh emphasized in blush pink.

Take a closer look at the shoes below and take your pick at who has the best on-court kicks in Game 1 of the 2021 NBA Finals.