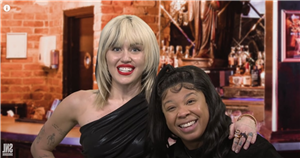 Ah, Christmas greeting cards . . . leave it to Saturday Night Live to poke fun at how cheesy and cliché they are! During last night’s episode, which was hosted by the one-and-only Billie Eilish, all the Christmas cards on a couple’s refrigerator magically came to life, revealing what’s really going on behind the scenes. Midway through the sketch, we get a glimpse of someone who looks an awful lot like Miley Cyrus before realizing that it’s actually Miley Cyrus!

In a surprise cameo, we learn that a woman named Ruth (Punkie Johnson) insists on taking a picture with the superstar at a restaurant before deciding to make it her holiday card. “This woman came up to my table and said, ‘You’re Anna Montana,’ and then said she hated my music,” Cyrus jokes. “She asked for a photo and implied if I didn’t take it it’s because I was racist,” she continues. “So I guess Merry Christmas from Miley and . . .” After noticing Cyrus trail off, Johnson retorts, “You don’t know my name? You racist!”