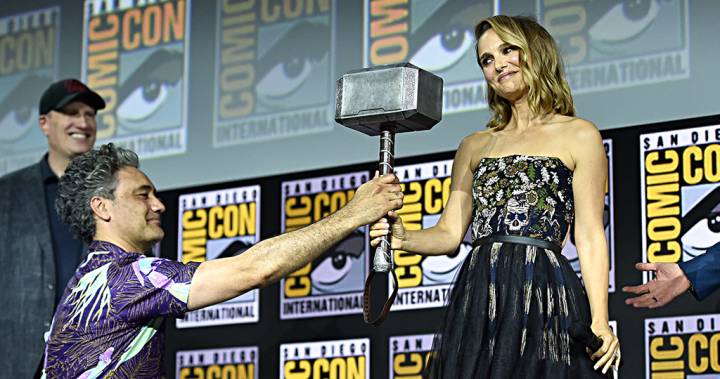 NOTE: Major spoilers ahead. Do not read if you haven’t seen up to Avengers: Endgame and Spider-Man: Far From Home in the Marvel Cinematic Universe.

San Diego Comic-Con 2019 (SDCC), one of the most highly anticipated gatherings of the year, concluded on Sunday night.

Not only were nerds across the world treated to trailers and announcements from the likes of the Terminator and Star Trek franchises, but Marvel too.

That’s right, after skipping 2018’s SDCC to focus on completing the third, and most successful, phase of the Marvel Cinematic Universe (MCU), Kevin Feige, the president of Marvel Studios, returned to the convention centre’s Hall H to share the company’s upcoming plans for “Phase Four.”

While the Disney-owned media giant just beat James Cameron‘s Avatar as the highest-grossing film of all-time — with the recent Avengers: Endgame — and left avid fans around the globe in sorrow following Tony Stark‘s emotional death (portrayed by Robert Downey Jr.), it seems these beloved superheroes need to keep fighting without looking back.

There’s going to be some new heroes along for the ride too, according to Feige.

Feige went through each of the films and series, revealing the cast and directors by inviting them all to the stage. He also shared (most of) the release dates, revealing that each project would fall between the Spring of 2020 to late 2021.

Directed by Chloé Zhao (The Rider), The Eternals will be our first look at some brand new superheroes in the MCU. Many Marvel fans, however, have been waiting for a cinematic take on the team of immortal heroes since their comic book debut in 1976.

Lastly, portraying the leader of The Eternals, Ajak, is Salma Hayek. The film is set for a Nov. 6, 2020 release.

The Falcon and the Winter Solider

At the end of Avengers: Endgame, it was revealed that Steve Rogers/Captain America (Chris Evans) travelled back in time to the 1940s to live his life properly and happily after defeating Thanos.

By the end of the film, he is shown as an old man in the present day. He passes the torch — or his iconic shield, rather — to Sam Wilson (portrayed by Anthony Mackie), best known simply as Falcon, suggesting he would be the next Captain America.

While it’s unclear if the show will see Mackie as the next Captain, Feige revealed that Sebastian Stan would be returning to the screen as his partner, Bucky Barnes/The Winter Soldier to fight crime.

The duo shared some details on the upcoming Disney+ series, adding that Daniel Brühl will return as the main villain, Baron Zemo. The Falcon and the Winter Soldier is set to debut in fall 2020.

Anthony Mackie of Marvel Studios’ ‘The Falcon and The Winter Soldier’ at the San Diego Comic-Con International 2019 Marvel Studios Panel in Hall H on July 20, 2019 in San Diego, Calif.

Shang-Chi and the Legend of the Ten Rings

Since the beginning of the MCU, Marvel has been hinting at Shang-Chi and the Legend of the Ten Rings. Specifically in Jon Favreau‘s Iron Man films.

Now, a feature-length film has been announced.

Canadian actor Simu Liu was cast as Shang-Chi earlier this year after poking fun at Marvel with a tweet, suggesting they should enlist him as the 1973-introduced hero.

Destin Daniel Cretton is set to direct the film as well. While onstage, the Short Term 12 director announced that Awkwafina would be joining the cast, along with Tony Leung, who will be portraying the real Mandarin, opposed to the faux Mandarin, portrayed by Guy Pearce in Iron Man 3 (2013).

WandaVision was announced as a Disney+ original series, which will reunite onscreen lovers, Paul Bettany (Vision) and Elizabeth Olsen (Wanda Maximoff/Scarlet Witch), in their adventures before the events of Avengers: Infinity War, where Vision is killed by Thanos.

Feige also revealed that Teyonah Parris, will the stars as a grown-up version of Monica Rambeau — who was introduced in Captain Marvel (2019).

While in-depth details surrounding the show were left unsaid, WandaVision will premiere in the spring of 2021.

That’s right, Tom Hiddleston will be returning as the Asgardian God of Mischief, also in the spring of 2021. This will not be a prequel, however.

For those who may not have caught it, or even remembered, Loki, or at least one version of him, managed to escape his tragic fate with the Space Stone during a messy time travel sequence in Avengers: Endgame.

His whereabouts were never alluded to or confirmed by the end of the film.

Feige, however, confirmed that this Disney+ series will show exactly where he went, joking that the first place was SDCC 2019.

Doctor Strange in the Multiverse of Madness

Benedict Cumberbatch was invited to the stage in wake of the Doctor Strange in the Multiverse of Madness announcement.

The nearly 8,000-strong crowd also sang Happy Birthday to the actor, a day after his 43rd.

A May 7, 2021 release date was revealed — making it nearly five years since the first Doctor Strange film — along with director Scott Derrickson (Sinister, Doctor Strange) at the helm of the highly anticipated sequel.

As a surprise to many, Olsen, 30, was brought back to the stage. It was announced that she will play an important part in the film and that the events of WandaVision will connect directly to the main storyline.

According to Variety, Derrickson, 53, said he will focus on “gothic” and “horror” elements in the film.

Perhaps one of the most unusual announcements was made towards the latter half of the panel when Feige offered some information on the MCU’s first-ever animated series.

What If…?, according to the Marvel Studios president, will focus on stories that could have happened in alternate timelines. He added that many of the beloved actors from the MCU will reprise their roles as voice talent in the Disney+ exclusive.

It’s currently set for a release in the summer of 2021.

While there wasn’t a great deal of information shared in regards to Hawkeye’s own Disney+ show, Jeremy Renner took the stage to share his excitement about the project and to talk about an important character in the history of the Marvel comics: Kate Bishop.

Neither Feige or Renner revealed who would be playing Bishop, but they announced that Hawkeye would premiere in fall 2021.

Not long after working on the mixed-reviewed Men in Black reboot earlier this year, Chris Hemsworth and Tessa Thompson were seen together yet again after a fourth instalment in the Thor series was revealed.

Thompson, who plays Valkyrie, was revealed to be Marvel’s first-ever LGBTQ2 hero. Natalie Portman made a return to the stage too.

The V for Vendetta actress was absent from 2017’s Thor: Ragnarok after it was comically revealed that her character, Jane Foster, had dumped Thor (Hemsworth). Her character, however, returned for a number of flashback scenes in Avengers: Endgame.

Though the biggest shock, perhaps, for fans of the Thor franchise, was that Portman will be playing a female version of Thor in Love and Thunder — the “Goddess of Thunder” — a storyline which was introduced in the Thor comic books back in 2014.

While Hemsworth’s Thor sheds the pounds he gained during the events of Avengers: Endgame, it’s possible Portman chose to pick up his slack and protect the realms with Mjulnir herself.

Thor: Love and Thunder is currently scheduled for a Nov. 5, 2021 release.

Scarlett Johansson will return to the screen on May 1, 2020 in the very first taste of the MCU’s mysterious Phase Four. After years of debate and speculation, Feige seemed thrilled to announce an official Black Widow film for what seemed to be the last of Marvel’s reveals.

Black Widow, of course, will be a prequel, as she was killed off in Avengers: Endgame.

Fortunately for fans present at the convention, they were treated to some exclusive footage from the long-awaited flick.

David Harbour, who is currently riding high from the success of the third season of Netflix‘s Stranger Things, was revealed as part of the expansive cast too, along with Florence Pugh, O-T Fagbenle and Rachel Weisz.

After inviting the multitude of cast and crew members back to the stage for a commemorative photo with the dedicated fans at SDCC 2019, Feige invited one last star to the stage.

It was Mahershala Ali, who walked onstage clad in a baseball cap which read Blade. The crowd went absolutely berserk.

Nothing was said about the film, however, Feige thanked the crowd, saying “until next time.”

The vampire-hunting Marvel character was made popular through the Blade trilogy which began in 1998.

Towards the end of the panel, Feige revealed that while they didn’t have enough time or details to cover the films, Marvel will be working on a sequel to 2018’s critically acclaimed Black Panther, Guardians of the Galaxy Vol. 3 and a Captain Marvel 2.

This image released by Disney shows Michael B. Jordan, left, and Chadwick Boseman in a scene from Marvel Studios’ “Black Panther.” (Matt Kennedy/Marvel Studios-Disney via AP)

In addition to those, he suggested Marvel fans might be treated to their own take on the Fantastic Four soon, as well as a Mutants movie, according to the Associated Press.

Disney+ launches on Nov. 12 in North America. Details can be found through the official website.

— With files from the Associated Press