Proceed with caution if you’re going to start rumors about Mariah Carey.

The music superstar has responded to reports that she permanently cut ties with Jay-Z’s management company, Roc Nation, in the wake of an “explosive” meeting with the rap entrepreneur that left their decadeslong relationship in tatters.

An unnamed source told the British tabloid The Sun last week that Carey had “sensationally quit” the label, which she signed with back in 2017, over a “blazing row” with Jay-Z. The two artists reportedly clashed over the direction of her career, as Carey plans to launch a new “heavily R&B-influenced album” and a world tour in the next year.

But on Monday, Carey brushed off the gossip with a distinctly Mariah and perfectly petty retort on social media to set the record straight.

“The only ‘explosive’ situation I’d ever ‘get into’ with Hov is a creative tangent, such as our #1 song ‘Heartbreaker’!!” she wrote alongside a clip from the iconic music video. “To the people who make up these lies I say ‘Poof! —Vamoose, sonofa*****’!”

The Sun report claimed Carey was set to “formally depart in the next few weeks” after the meeting.

“It is a shame because they had done some great work in the last few years,” the source was quoted in The Sun’s story. “But this meeting couldn’t have gone much worse. Mariah has been talking to other managers and thinks she has found someone who she feels has full belief in her as she takes her next steps. She isn’t letting this stand in her way.”

After joining forces on the chart-topping 1999 smash single, Carey and Jay-Z have remained in each other’s orbit, collaborating on various tracks together, including “Things That U Do” and a “Shake It Off” remix, throughout the years.

The two made their partnership official in 2017 when Carey signed with Roc Nation for management following a particularly volatile period for the pop icon that culminated in her disastrous 2016 New Year’s Eve performance. 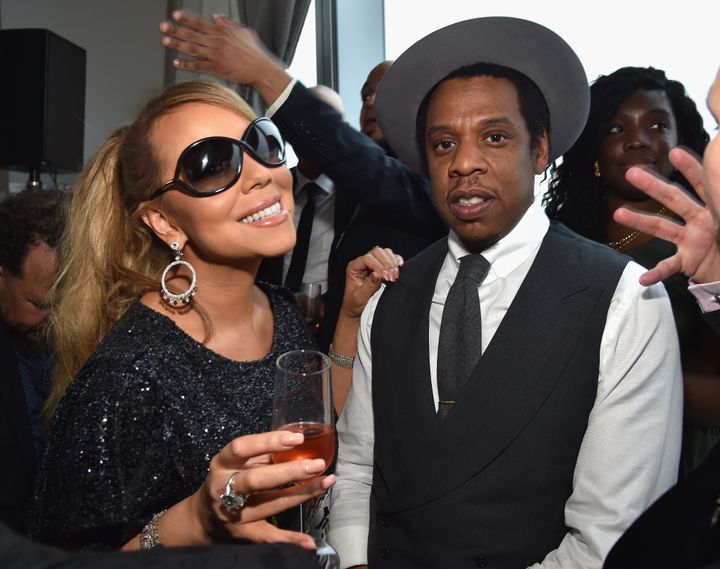 The partnership seemingly has been a fruitful one for Carey. The singer released 2018’s “Caution,” her best-reviewed studio album in years, and most recently the compilation album “The Rarities,” which celebrated the 30th anniversary of her self-titled debut record, all while working with Roc Nation.

She also published a best-selling memoir “The Meaning of Mariah Carey” and continued her reign as the holiday queen thanks to the omnipresence of “All I Want for Christmas Is You” and her Apple TV+ project “Mariah Carey’s Magical Christmas Special.”

However, as some fans noted, Carey no longer appears on Roc Nation’s website as one of the artists the company represents.

Despite the change, all seems good between the longtime collaborators, as Carey reportedly followed her former Roc Nation manager Melissa Ruderman to Range Media Partners, which currently manages the singer.

“This story is completely made up,” an unnamed source told The New York Post. “The relationship with Roc Nation ended amicably and Mariah and Jay-Z are on great terms.”