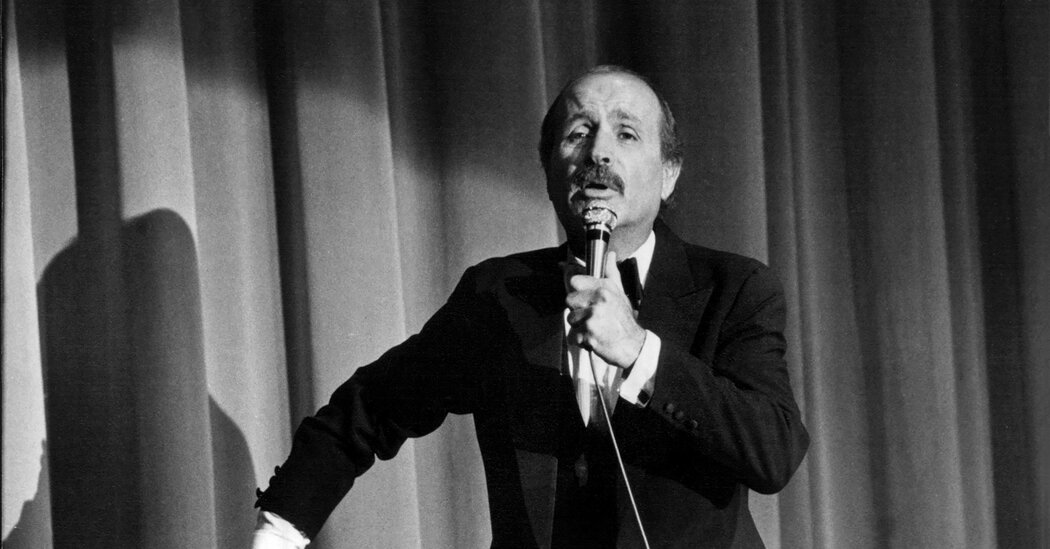 Mal Z. Lawrence, a mainstay of comedy in the Catskills during the latter years of that resort area’s heyday and one of the four performers who brought borscht belt humor to Midtown Manhattan in 1991 in the hit show “Catskills on Broadway,” died on Monday in Delray Beach, Fla. He was 88.

His talent agent, Alison Chaplin, confirmed the death, in a hospice center.

Mr. Lawrence came to prominence in the Catskills in the 1950s but soon was known all over the country, playing Las Vegas, Atlantic City, Florida and other stops on the comedy circuit where his brand of relatively mild Jewish-tinged humor was greeted enthusiastically. To a Florida audience he might joke about the Catskills; to a Northern audience, he’d poke fun at Florida.

“I worked a place down there called Century Village of West Palm Beach,” one routine went. “Working there was like appearing in Madame Tussauds Wax Museum. If you didn’t have a handicapped parking sticker, there was nowhere to put your car.”

The Catskills, which drew a heavily Jewish crowd, gradually declined during the 1960s as a summer vacation destination. Mr. Lawrence, though, kept the flame alive; he was still performing his borscht-belt-style routines as he neared 80, working material at venues in Florida, New Jersey, Illinois and elsewhere that would have fit comfortably into his act a half-century earlier.

He recognized that his style of humor had acquired an added dimension of nostalgia, something he, Dick Capri, Marilyn Michaels and Freddie Roman turned into gold in December 1991 as the original cast of “Catskills on Broadway.” The show was little more than each of them in turn doing about 30 minutes of jokes, with Mr. Lawrence going last. Opening at the Lunt-Fontanne Theater, it ran for more than a year and then enjoyed a healthy touring life.

“‘Catskills on Broadway’ manages to reproduce the ambience of the Catskills,” Mel Gussow wrote in his review of the Broadway premiere for The New York Times. “The basic difference is that on Broadway there is not a nosh in sight. But there is a groaning board of jokes about eaters and stuffers. As Mr. Lawrence observes, everyone in the Catskills wears warm-up suits. Warming up for what, he asks, sumo wrestling?”

Mr. Lawrence also acted, portraying secondary characters in films including “Rounders” (1998) and “Boynton Beach Club” (2005) and occasionally turning up in plays. In 1997 he was part of the Broadway cast of a revival of “Candide” directed by Harold Prince, playing (as Ben Brantley’s review in The Times described it) “a giddy assortment of supporting roles.”

To play them, he shaved the mustache he had been sporting for some years.

“I look 20 minutes younger now,” he told Jewish Exponent at the time.

Manny Miller was born on Sept. 2, 1932, in the Bronx and grew up there. “Mal Z. Lawrence,” as he variously told the story over the years, was the suggestion of an early agent, or perhaps several different agents. “Lawrence” was borrowed from a Long Island village where he was appearing. As for the Z, which stood for nothing, “My agent told me I’d get more marquee space,” he said.

He was a decent baseball player as a youth and said he even tried out for the Yankees, but nothing came of it.

He was drafted into the Army in 1953, and while serving over the next two years began finding his way toward a comedy career. He resembled Jerry Lewis, he said, and he teamed with another soldier to do a knockoff of Mr. Lewis’s routines with Dean Martin for the amusement of fellow servicemen.

He went to work in the Catskills in 1955 at Sunrise Manor in Ellenville, N.Y. He started out as a tummler, or social director, whose job was to keep guests entertained throughout the day and encourage them to join in group activities.

“I took women on walks, did Simon Says,” he recalled in an oral history for “It Happened in the Catskills,” a 1991 book edited by Myrna Katz Frommer and Harvey Frommer. “The first time I did Simon Says, I gave away 30 T-shirts. I couldn’t get anyone out.”

Soon he was performing, both at Catskills resorts and at small nightclubs in Eastern cities. If he never made the jump to television or film stardom like Danny Kaye, Buddy Hackett and other comics who started in the Catskills, he did work steadily.

The Broadway show evolved from a one-night show at the Westbury Music Fair on Long Island that was enthusiastically received, although not everyone was convinced it would work on Broadway.

“Many knowledgeable people said that it wouldn’t go,” Mr. Lawrence told The Washington Times in 1993, when the touring version of the show played the nation’s capital. “I think I was one of those people.”

In 2000 he, Bruce Adler and Dudu Fisher brought a similarly styled show, “Borscht Belt Buffet on Broadway,” to Town Hall in Midtown. He was the closer in that show as well.

“Pronouncing himself thrilled to be on West 43rd Street at the height of the off-season,” Lawrence Van Gelder wrote in a review in The Times, “Mr. Lawrence is soon running through topics like doddering security guards in Florida, gambling in Atlantic City, meals in Catskills resorts, old age and the effects of marriage on behavior. The audience exits smiling.”

In 1980 Mr. Lawrence married Patty Heinz, who survives him. They lived in Delray Beach.

Mr. Lawrence was not the type of comic to dwell on comedic principles or technique.

“My philosophy is, ‘Do anything that you have to do to make them laugh,’” he told The Washington Times. “What else can we do?”