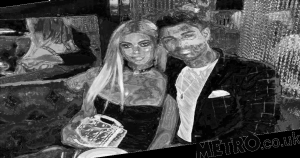 Spending your summer hidden away in a lavish villa in Majorca may sound like a dream, but there were some things our Love Island favourites just couldn’t live without.

Shut off from the real world, it’s no surprise that the islanders could get a little homesick and now, Belle Hassan has revealed that producers would sweep in and offer the gang McDonald’s to boost their morale.

Eagle-eyed viewers had spotted a McDonald’s cup in the villa bedroom and when quizzed about a McFlurry in the fridge, Belle confessed: ‘We had a few of them.’

Joining boyfriend Anton for Heat magazine’s Love Island: Under the Duvet series, the couple admitted show bosses were partial to dropping off McDonald’s from time to time.

Asked if it was a ‘home comfort’ kind of thing, Belle said: ‘Yeah, we needed that. We really did.’

Anton chipped in: ‘I think it was about once a week we were getting them. I had a few chicken nuggets here and there.’

‘[Belle] was trying to fatten me up, before the next bombshell came in,’ he joked.

The couple also revealed that Ovie Soko was given a makeshift basketball court by producers, so he could practice his skills in between filming.

According to Belle, he had to ‘really whinge’ to producers, but eventually they caved and the Great Britain basketballer was allowed to leave the villa to work on his ball game.

Belle and Anton finished in fourth place on the show and were dumped from the villa just 24 hours before the Love Island final.

Since then, the couple have enjoyed their first date (which Belle’s actor dad Tamer Hassan actually tagged along to) and Anton has found himself in hot water with Molly-Mae Hague.

It came to light during the reunion show that Anton awkwardly unfollowed Molly-Mae on Instagram, after leaving the villa.

He was quizzed by Caroline Flack while a shock Molly looked on and refusing to reverse the move, Anton said he ‘wouldn’t be re-following’ Molly, despite her saying she thought the pair were pals.

Even Molly’s boyfriend Tommy Fury has got in on the spat and branded Anton ‘childish’ for his social media culling.

Appearing on Capital FM’s breakfast show, he said: ‘I think there was just a little bit of tension, you know, purely off what Anton said and about all the unfollowing stuff and all that…

‘I think it’s a bit childish because we’re all good friends here and there’s no need for any bad blood and on mine and Molly’s part, there’s no bad blood, we wish him all the best.’