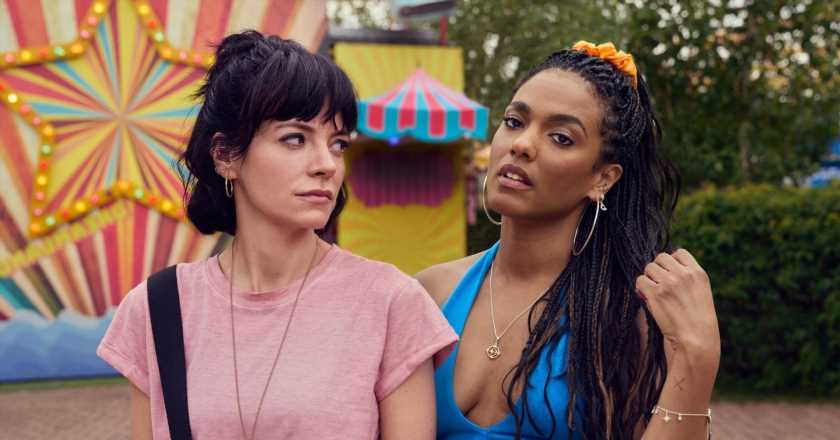 If the description for Sky’s Dreamland is anything to go by, we’re in for a treat. Here’s everything we know about Lily Allen’s TV debut so far.

Lily Allen may be best known for her incredible career as a singer-songwriter, but music isn’t the only passion the former Stylist guest editor possesses.

Last summer, she made her West End debut in 2:22 – A Ghost Story, which saw her play a woman who believes her house is haunted. And now, Allen is set to flex her acting muscles once again – this time, in a six-part Sky Original comedy from Sharon Horgan’s and Clelia Mountford’s production company, Merman.

The show – called Dreamland – will mark Allen’s debut TV role, and has just started filming in the seaside town of Margate, on the Kent coast.

While details are currently limited, we do know a little bit about what to expect from the show. And if the synopsis is anything to go by, it’s going to be absolutely hilarious. Keep reading to check out everything we know about Sky’s Dreamland so far.

What is Dreamland about?

Dreamland will be set in Margate.

Based on Sky’s 2018 Bafta-winning short of the same name (which was written by Sharon Horgan and produced by Merman), Dreamland is described as a “comedy-drama about secrets, lies, love and aspirations within a family of four sisters”.

The show’s synopsis reads as follows: “Set in the sun-drenched British seaside town of Margate, [Dreamland] is a dark comedic exploration of multi-generational female relationships, and their (somewhat dysfunctional) family dynamics.”

It continues: “Eldest sister Trish is pregnant for the third time with her partner Spence. And this time, she’s decided: it’s going to be a girl. Her two sisters Clare and Leila rally around her with their mum and their Margate-legend nan, “manifesting” a little girl at Trish’s ‘mani-festival’.

“But when their other sister, Mel, makes an unexpected reappearance back into their lives, her return threatens to destabilise the entire family. A knock on their door and their ‘Dreamland’ is no more…”

Who stars in Dreamland?

Alongside Lily Allen (who will play Mel), the show also stars a long list of brilliant female actors.

These include Doctor Who’s Freema Agyeman, who will play the family’s oldest sister Trish, and Peaky Blinders’ Aimee-Ffion Edwards, who will take on the role of Leila.

Also joining the cast are Kiell Smith- Bynoe, who will play Spence, and Gabby Best, who will play Clare. Frances Barber and Sheila Reid will also star as the girls’ mum and nan respectively.

Samantha Bond will also make a guest appearance as a character called Orla.

When and where will Dreamland be released?

While we don’t have an exact date, we do know Dreamland will air on Sky Comedy and NOW in 2023.

We’ll update this article with the latest news as and when we get it, so keep your eyes peeled.