So says Genesis 19. And so goes a recitation by a devout young man traumatized by his repressed homosexuality in “Lilies, or the Revival of a Romantic Drama.” Staged at the Theater Center with a limited audience, this aimless production by the Drama Company NYC depicts a confrontation between two men that reveals how an illicit gay love affair of decades past brought hellfire — and literal fire — to a small Canadian town.

It’s the spring of 1952, and an ex-inmate named Simon Doucet (J.J. Miller) has requested a meeting with Bishop Jean Bilodeau (Marc Verzatt). They’re former schoolmates, but this is no cordial reunion; threatening Bilodeau with a knife, Doucet forces him to sit through a staging of the past, watching younger versions of themselves act out something that happened when they were teenagers in the fall of 1912.

Bilodeau scoffs and occasionally interjects with protests of the performance, which shows the ill-fated love between young Doucet (a well-cast Hartley Parker) and his best friend, Count Vallier De Tilly (a sensationally anguished Florimond Le Goupil-Maier). Bilodeau uneasily witnesses the sins committed by his younger self (Grant Hale, sanctimonious and perfectly weaselly), a closeted God-fearing boy whose obsession with and jealousy of the couple ultimately destroys them.

Under Andrew Benvenuti’s unsteady direction, the majority of the play, written by Michel Marc Bouchard in French and translated by Linda Gaboriau, takes place as a flashback. First performed in 1987, “Lilies” quickly sloughs off realism to present the play not as a true performance but as a kind of living memory. (The simple set, dressed with nine chairs and occasionally tables, leaves it all to our imagination, though Benvenuti’s ungraceful blocking obscures even that view.)

It’s a different approach from the director John Greyson’s in the pulpy 1996 Canadian film adaptation, in which Bilodeau visits Doucet in prison and all the actors in Doucet’s play are gay fellow inmates. There, we had a clear perspective and consistent stakes: Though the film’s cinematography blurs the line between the performance in the jail and a fluid recollection of the past, the action is anchored in the present, with the camera alternatively following and mimicking Bilodeau’s gaze.

This “Lilies” lacks a clear perspective. It’s less interested in the present-day confrontation between Doucet and Bilodeau and even loses its focus on Bilodeau altogether. The adult Bilodeau spends 90 percent of the play silently sitting in the audience watching his younger self — a waste of an actor and character who is at the center of the tale.

It’s a shame, too, that Bilodeau remains so removed because moralistic characters are often candy for performers, who can play with the contradictions that often come with the holier-than-thou archetypes hoping to pray away the skeletons in their own closets. The script doesn’t allow for much introspection. In fact, the writing feels gleaned from a mix of gay fan fiction and daytime soaps. At one point, a Parisian baroness magically appears via hot-air balloon; there are also two murders, a Bonnie-and-Clyde-style escape and a whole lot of arson.

Then there’s the all-male cast of 11. Like the film, the men perform the female roles in drag. The move is intentionally subversive, as a way to normalize queer relationships within a story setting where such relationships are taboo. The effect is campy, à la Edna Turnblad, but how much of that is overtly drawing from the performative tradition of camp and how much the production is stumbling headfirst into hyperaffected melodrama is unclear. 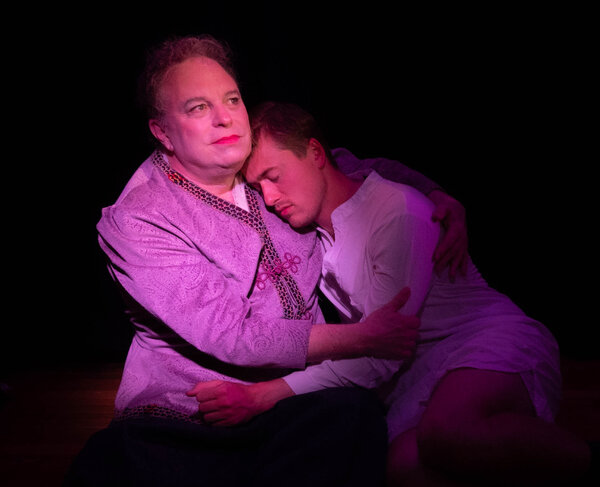 There is a parade of queer tropes that seems to escape critique or interrogation: the Christian boys’ school with the obviously closeted priests; the self-hating gay boy; a homophobic father; a fiancée who is actually a beard; a tragic queer death.

Bill Morton as Vallier’s mother, the Countess Marie-Laure de Tilly, is a delightful wise fool, floating across the stage with a performance as flowery and bonkers — and occasionally knowing — as a Canadian Blanche DuBois. But this performance is an uncomfortable contrast with Miller’s stiff and unconvincingly threatening Doucet, as though they’re characters taken from two totally different plays. At what point does a crazy countess play too closely to the tired role of the histrionic gay diva? And when does J.P. Ross’s snooty Baroness Lydie-Anne de Rozier, with her arch purrs and snide remarks, become a performance of the catty gay man stereotype?

In this way and others, “Lilies” seems to be attempting a balancing act without consciously knowing it. In one scene, a character is given a pearly white clawfoot tub for his birthday, and two boys end up in the bathtub kissing and embracing. The scene feels objectifying, and a cheesy piano accompaniment exacerbates that impression; it isn’t as much about the love between the boys as it is about the novelty of their sex, which would be fine if the scene — and the rest of the play — were more clearly filtered through the shame and desire of Bilodeau’s gaze, but as it is, there’s just a clumsy bit of fully naked splash time.

How seriously does “Lilies” take its melodrama, how earnestly does it wear its clichés? The baroque turns and flourishes of the script indicate some level of self-awareness (as when one character theatrically crashes an engagement party dressed as Julius Caesar), yet the deadpan declarations and rebuttals of love suggest austere intentions.

Once “Lilies” reaches its conclusion — which is so predictable and pat, and in this production so abrupt that there was an unsure beat before the audience’s applause — the impression it leaves is of an old theme with a few flamboyant variations. Doucet’s play within the play ultimately persuades Bilodeau to confess his misdeeds — but the play I saw? Much less persuasive.

Lilies or The Revival of a Romantic Drama
Through June 14 at the Theater Center, Manhattan; tdcnyc.org