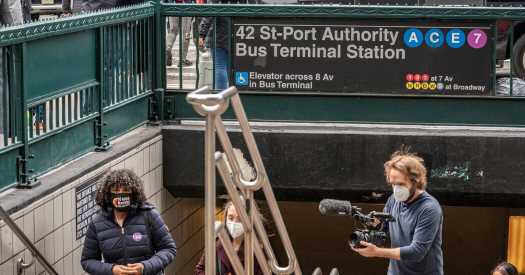 On June 22, New Yorkers will go to the polls to choose the Democratic candidate who will very likely be the city’s next mayor. After a chaotic year, many voters are, understandably, just tuning in now.

As a politics producer on The New York Times’s Video desk, I spend most of my time thinking about how we can use original visual reporting to bring additional depth to key races and issues. For this project on the mayoral race, our goal was to help readers get to know a big group of contenders in a way that was clear, informative and fun.

Last month, we digitally published our final product, an interactive set of videos featuring interviews with the top eight Democratic candidates. The interviews, conducted by the Metro reporters Emma Fitzsimmons and Katie Glueck, along with photography done on set, inform a print version of the project that appears in Sunday’s newspaper.

When we started planning, we knew that the race had a number of distinct qualities we needed to take into consideration. First, many of the candidates were not well known to those who didn’t closely follow city politics. This was also the first year New York City would be using ranked-choice voting — in this race that means voters can rank up to five candidates on the ballot. (A full explanation of how this voting will work can be found here.)

Our team included Metro editors and reporters, designers, graphics editors and video journalists. The initial idea for the piece was based on past Times projects that focused on Democratic presidential candidates in advance of the 2020 primaries. (here and here). The core idea was simple: Bring in the candidates, ask them all the same questions and publish their answers in an interactive format that allowed readers to “choose their own adventure” and navigate through topics of interest.

We wanted to give these interviews and the project a New York City feel, so we selected two different spaces in The New York Times Building where we could use the city as a backdrop. 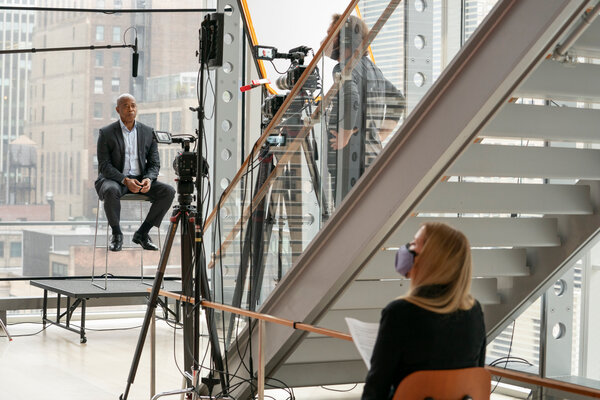 Our interviews were set primarily in natural light, which can pose certain challenges. Ideally, an overcast sky or a clear sunny day is best, because you want light to hit your subject evenly. A cloud that moves in front of the sun and casts a shadow on your subject’s face can ruin a shot. This meant closely tracking the weather and cloud movements with Noah Throop, our cinematographer, in advance of every shoot. On bad weather days, we filmed in the Times Center auditorium, which was less susceptible to light change.

We also had to navigate the challenges of filming during a pandemic, meaning we needed to find large open spaces and set up testing regimens and safety protocols for both staff members and guests.

Behind the scenes, we coordinated with the campaigns in an effort to catch each candidate arriving, which at times meant running through the Times Square subway station, trying to scout for their vehicles in traffic and looking to confirm whether Andrew Yang and his team were in fact having lunch at Schnipper’s (a burger joint in the Times building) before his interview. The cameras were rolling from the moment we met up with candidates outside until the moment they left the building.

We decided to make one video per candidate, instead of organizing videos by topic, to give viewers an opportunity to sit and listen to a particular individual if they desired. The interviews ranged in length from 40 minutes to more than an hour based on the candidate’s speaking style and brevity.

My role during an interview as a producer is to focus on how everything will look and sound on video. This means that the array of things I do includes listening for good sound bites, monitoring what questions might need an additional take, fixing people’s hair and running outside to ask ambulance drivers on a break to turn off their flashing lights (which I had to do numerous times during these shoots).

In editing down the interviews, we tried to highlight what made a candidate unique and pull out key differences among members of the group — along with some moments of levity. But ultimately what we wanted to provide was a resource where voters could hear from each person, relatively unfiltered, to help them make up their minds. 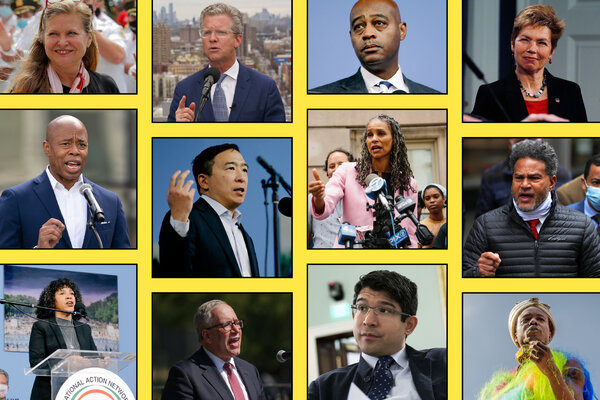 Who Wants to Be Mayor of New York City?

The race for the next mayor of New York City may be one of the most consequential elections in a generation. Here are some of the leading candidates vying to run the nation’s largest city.