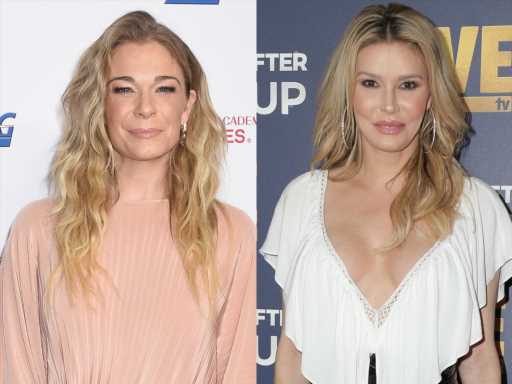 It looks like 2020 wasn’t the worst year for LeAnn Rimes and Brandi Glanville, the two constant frenemies look like they’ve buried the hatchet — for now. But let’s get real about this situation, the former Real Housewives of Beverly Hills star has every right to not like Rimes given the fact that she had an affair with Glanville’s former husband Eddie Cibrian. The affair happened over a decade ago, but it took a long time for the hurt feelings to subside.

In a holiday post on Instagram, Glanville posted a photo of the two of them in gold-sequined masks smiling and holding their index fingers in the air. She wrote, “Hanging with the best masked singer of all time leannrimes” in reference to Rimes winning season 4 of The Masked Singer recently. The picture makes their friendship look breezy, but it’s been anything but easy over the past 10 years.

Their relationship has had fits and starts because it was a challenge for Glanville to watch Cibrian and her sons, Mason, 17, and Jake, 13, settle in with their new life with Rimes. Every minute of the affair was not only covered by the tabloids in 2009, but also by the Bravo TV reality show that Glanville starred on for three seasons.

Glanville revealed on Make Speidi Famous Again podcast in 2018 that she had a heated discussion with Rimes and that’s when they started to get serious about hashing out their differences. “We just kind of had it out about what is right, what is wrong, what’s better for the kids, and what bothered me and what bothered her,” she said to hosts Heidi and Spencer Pratt.

Rimes is also echoing a similar tune when it comes to working on their friendship and she admits it’s gotten easier as time has healed some of the wounds the affair caused. “You have to consider everyone’s feelings and you have to allow people to have them and you can’t take them personally,” she shared with PeopleTV in early 2020.”Nobody’s fighting, nobody’s doing anything weird . . . it’s interesting, the kids are older now, it’s fun. The kids are happy and that’s all that matters.”

Let’s hope the truce in their relationship becomes a permanent one because we’ve been here before with the two celebs. Maybe 2020 was the turning point both of them needed to put the past behind them.

Before you go, click here to see celebrity couples who were married to other people when they met.