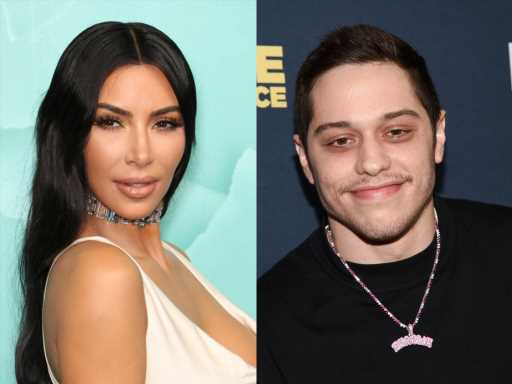 Out of all the things we had on our 2021 bingo card, Kim Kardashian and Pete Davidson’s reported romance was not there. But here we are — just a few short weeks after hosting Saturday Night Live, it seems like the SKIMS mogul has been enjoying a few casual dinner dates with The King of Staten Island star. But the potential couple’s relationship might not be as laid-back as we thought. In fact, Kardashian and Davidson could be getting serious in their relationship.

According to a new report from Us Weekly, Kardashian is having “such an easy time” with Davidson. The outlet’s source even thinks the beauty mogul “is falling for” Davidson — quite the leap from initial assumptions that the pair was just keeping things friendly. “He makes her feel good and she’s excited to see what happens.” It’s been roughly nine months since Kardashian filed for divorce from husband Kanye West after nearly seven years of marriage, and during this time, Kardashian’s close family and friends just want to see her “happy.”

Us Weekly’s source reiterated that Kardashian’s inner circle is “eager for Kim to have fun and be free.” And Kardashian seems to be having some low-key fun with the SNL cast member. The source also shared with the outlet that Kardashian is “always” left “smiling and excited” after she’s spent time with Davidson, and he “makes her laugh.”

Kardashian has been met with a lot of change and publicly scrutiny over the course of the past year. The dissolution of her marriage coupled with the end of KUWTK likely left an impact on her. Whether it’s his charm, ease, or humor, Davidson seems like he appeared in Kardashian’s life just at the right time. So, maybe now’s the time we get rid of our 2021 bingo sheets and make one up specifically for the Kardashian-Davidson romance.

Before you go, click here to see all the celebrity couples who met on set.