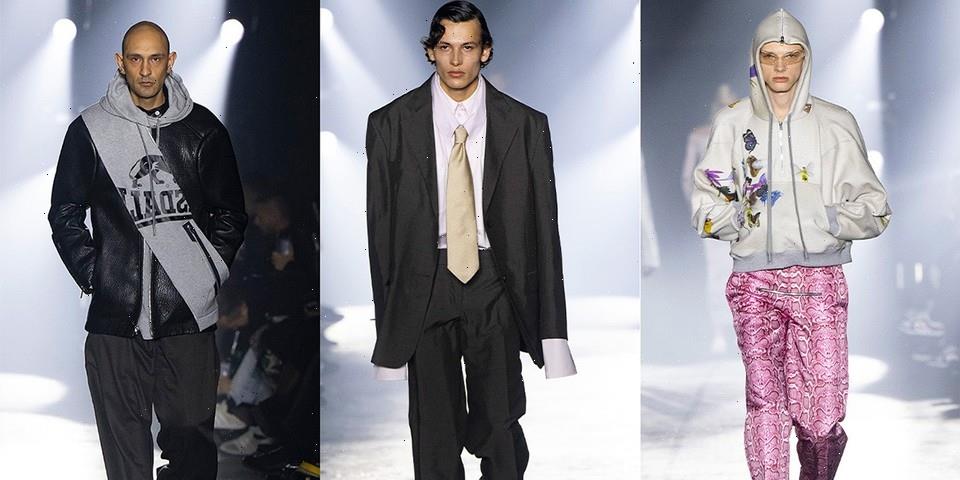 Showgoers were welcomed into a near-pitch black warehouse in Milan earlier today, with its exterior authentically decorated in graffiti. Inside, black concrete floors and market chairs were all you found before strobe lights announced the start of the show.

Off the bat, JORDANLUCA unknowingly said: “we have arrived.” Its usual decoded formalwear came through strong, but not as strong as the shoulders on its blazers. Such exaggeration is a reoccurring theme of the brand, with the blazers sporting oversized shoulders, lengthened lapels, and elongated bodies. On the contrary, a satin brown bomber jacket was, naturally, tight on the waist but was given the JORDANLUCA touch with bulbous shoulder pads. Houndstooth check overcoats echoed the formalities that came before it, while white faux fur jackets — decadent in volume — started to usher in another side to the brand: sex.

“Sex” has been a well-used word throughout the Fall/Winter 2023 season. FENDI, which came just moments before JORDANLUCA, delivered sheer knits. Gucci’s show yesterday spliced skirts across its menswear offering, and Martine Rose went all-out on the subversions.

At JORDANLUCA we also found skirts — some in traditional fabrics like Houndstooth, others in collaboration with the sportswear brand Lonsdale. This collaboration comments on sex itself, as the brand is highly fetishized in British subcultures and the Queer community, it being a beacon of lad mentality, which has been reappropriated from its Y2K stereotype.

The Lonsdale collaboration leaned into Queer culture deeply, with triple-stacked exposed underwear, off-the-shoulder sports jerseys, boxing boots, and even a long-line puffer coat that could have been bootleg if it weren’t for JORDANLUCA’s almost hidden monogram.

Ramping up the fun were cowboy boots — some as you’d expect, others with metal heel caps, and favored among the crowd, cowboy mules. Paired with everything from coated denim jeans with Western embroidery to pink camouflage pants that engulfed the foot, and even an oversized sage green corduroy suit, the boots acted as the perfect accent to FW23’s mishmash of references.

Overall, JORDANLUCA did not miss a beat. To find out more about the collection, Hypebeast spoke with co-founder Jordan Bowen backstage after the show.

Hypebeast: The show felt like JORDANLUCA had truly found its identity. Would you agree?

Jordan Bowen: Yeah. We’ve been working on essentially three collections: the Lonsdale capsule, the menswear which we try to improve every season and keep pushing, and the womenswear which we’ve tried to absorb into the menswear. We’re trying to treat the collection as one thing, think of the JORDANLUCA universe as one thing. We’re thinking of it as one wardrobe that anyone can access; it doesn’t really matter about gender or men’s and women’s, that doesn’t work like that anymore.

It’s been really interesting to work in a way that feels bigger. The more that we expanded the more singular we’ve been and for where we’re going.

The Lonsdale collaboration is perfect for your brand, too. It really explains the sexual urge of the brand.

Of course! You know, it’s really interesting in terms of presentation. There’s a similarity here, a kind of exhibition of menswear in Lonsdale’s style. There are interesting similarities in masculinity too, and how subversive both ideas are. There’s a commonality. There’s hypermasculinity.

As much as Lonsdale wants to get away from [stereotypes], I guess we also have to accept it for what it is. Make it sexy. We know it’s fetishized and it’s fun. Even though we’re at different ends of the fashion spectrum there’s a real vision with that kind of man. And then to add that to a womenswear collection has been really fun.

Take a look at JORDANLUCA’s FW23 collection in the gallery above, and stay tuned to Hypebeast to find more Milan Fashion Week FW23 content over the coming days.