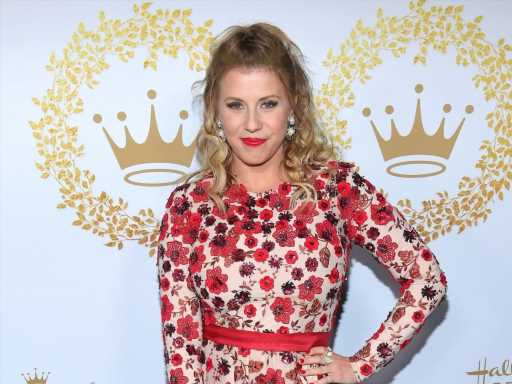 Since Friday’s SCOTUS ruling that overturned the landmark case Roe v. Wade, notable public figures have been using their platforms to call out the harmful impacts the decision will have on people in the United States. Over the weekend, actress Jodie Sweetin was among those celebrities who joined protests across the nation. The Full House alum was seen being thrown to the ground by LAPD in a recent video from a Los Angeles protest, and her powerful statement following the incident highlights that the urgency to continue fighting for reproductive rights.

A clip recently surfaced of Sweetin attending a protest near a freeway in Los Angeles. The footage showed LAPD officers violently shoving Sweetin to the ground. Fortunately, the actress was able to get back on her feet, with the aid of fellow protestors. You can see the footage, shared to Instagram by photographer Mike Ade, HERE.

While the clip continues to circulate, Sweetin released a statement that showed her resolve and her continued dedication to fight for abortion access and reproductive rights. “I’m extremely proud of the hundreds of people who showed up yesterday to exercise their First Amendment rights and take immediate action to peacefully protest the giant injustices that have been delivered from our Supreme Court,” Sweetin’s statement reads, per People.

“Our activism will continue until our voices are heard and action is taken,” the actress continues. “This will not deter us, we will continue fighting for our rights.” Sweetin’s dynamic response highlights how important and vital activism is at such a crucial moment in our nation’s contemporary history. It’s encouraging to see public figures use their platforms to put a spotlight on reproductive rights and what’s at stake now that Roe v. Wade has been overturned. We know Friday’s decision is only the catalyst for more protests and conversations that urgently need to be had, while 50 years of progress is so swiftly taken away. As Sweetin notes with the conclusion of her statement, “We are not free until ALL of us are free.”

Before you go, check out these brave celebrity women who have opened up about their abortion stories: