“Why are you agreeing to do 20 interviews on tape with the guy who took down Richard Nixon with tapes? With tapes!” Kimmel said on Tuesday. 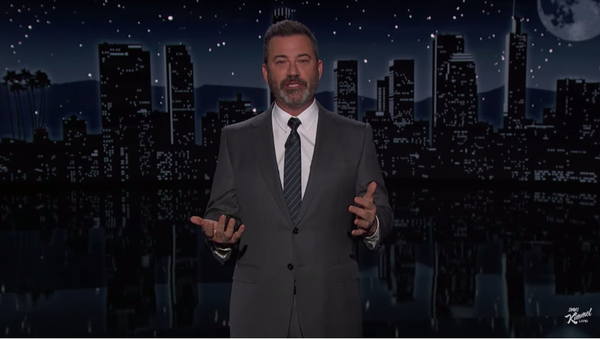 The journalist Bob Woodward released hours of content from his interviews with former President Donald Trump in a new audiobook, “The Trump Tapes.”

“According to Woodward, Trump would call him randomly at unexpected hours to talk while he was president,” Jimmy Kimmel said. “Because there is nothing he likes doing more than talking about himself — it’s his version of phone sex.”

“One of the things he talks about is explaining Covid to his son, Barron, who was 13 at the time. He told Barron he wished he’d known about Covid two months earlier, so he could have stopped it, which is also what he told Ivana about Don Jr.” — JIMMY KIMMEL

“Why are you agreeing to do 20 interviews on tape with the guy who took down Richard Nixon with tapes? With tapes! The emperor has no brain.” — JIMMY KIMMEL

“Kanye West had another bad day. You know how Kanye said he could say antisemitic stuff and Adidas cannot drop him? Well, today, Adidas dropped him.” — JIMMY KIMMEL

“Today, Adidas finally ended their massive deal with Kanye West after his antisemitism controversy. To which I say, ‘Ye!’” — STEPHEN COLBERT

“No one wants to work with Kanye — even New Balance thinks he’s unbalanced.” — JIMMY KIMMEL

What We’re Excited About on Wednesday Night

The “House of the Dragon” showrunner Ryan Condal was surprised by the warm reception given to Season 1 of the first “Game of Thrones” spinoff.