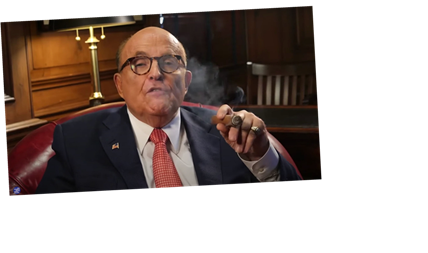 Live from New York, it’s … whatever the heck Rudy Giuliani is doing!

The recent news that YouTube is blocking Giuliani from making money off the ads that run on his videos came as a shock to Jimmy Fallon, especially since the “Tonight Show” host didn’t know he had a channel in the first place.

On Wednesday, Fallon decided to check out what Giuliani’s been up to on the video-sharing site, and what he found was pure gold … and cigars … and earbuds.

In various clips played by Fallon, the former New York mayor and current Trump attorney hawks everything from gold to supplements. Despite the ad ban, Giuliani is reportedly still allowed paid sponsorships, but the clips are so bizarre that each reads like a bad “SNL” sketch.

Questlove from The Roots even questioned whether the clips are real.

They are, Fallon assured him.

“Seriously, what happened to Rudy? He’s gone from QAnon to QVC,” the “Tonight Show” host quipped.

Check out the video above (around the 1:13 mark) if you’d like to see the clips that had Questlove questioning things or just always wanted to buy earbuds from the Four Seasons Total Landscaping guy.