Welcome to Best of Late Night, a rundown of the previous night’s highlights that lets you sleep — and lets us get paid to watch comedy. If you’re interested in hearing from The Times regularly about great TV, sign up for our Watching newsletter and get recommendations straight to your inbox.

Stephen Colbert, Jimmy Fallon and Trevor Noah all broadcast live on Wednesday night, weighing in on the first Democratic presidential debate. It featured 10 of the 20 eligible candidates; the rest will face off on Thursday.

“With the election a mere 496 days away, this was a chance for many of the unknown candidates to introduce themselves to a national audience. They could go from ‘Who is that?’ all the way to ‘Oh yeah, that guy.’” — TREVOR NOAH

Fallon poked fun at what seemed a rather low bar for candidates hoping to participate, and at President Trump’s announcement that he was bored with the proceedings.

“There were 10 Democrats onstage, and to qualify, all a candidate needed was to poll at 1 percent or higher. That’s it? One percent? I mean, even O.J.’s at 2 percent.” — JIMMY FALLON

“Trump tweeted and called the debate ‘boring.’ But he still watched, even though he also said it was a, quote, ‘very unexciting group of people.’ As opposed to the rock stars he usually hangs out with, like Mike Pence and Steve Mnuchin.” — JIMMY FALLON

“But I think I know why Trump’s upset: He’s probably jealous of the Democrats. You know, if you think about it, they got to be on TV, they got to talk about themselves and they got to be in Florida. It’s like, [impersonating Trump] ‘These are my three favorite things! I can’t believe it.’” — JIMMY FALLON

Ocasio-Cortez on the Candidates’ Spanish

Rep. Alexandria Ocasio-Cortez joined Colbert on “The Late Show,” giving her take on the evening’s contest. A number of candidates tried out their Spanish during the debate, and Ocasio-Cortez said that was a good thing, though it struck her as silly to a certain extent.

“It was humorous at times,” she said.

Jimmy Fallon offered the candidates advice in the form of a ditty.

Nicki Minaj, who just released “Megatron,” her first single of 2019, will be on “The Tonight Show” on Thursday. 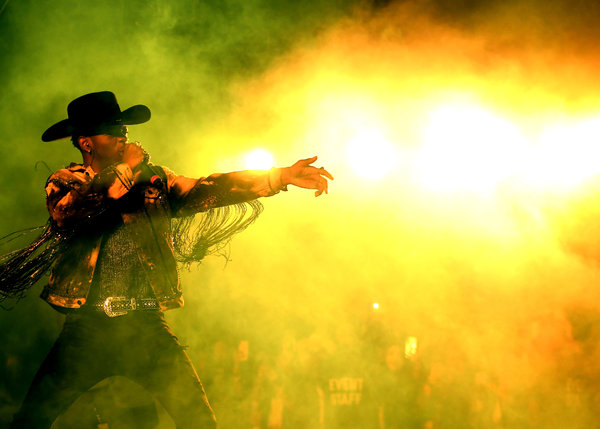 Get to know Lil Nas X, the rapper behind one of the season’s biggest songs.

Plus, Ideas for What to Watch Tonight:

The 25 Best Films of the 21st Century