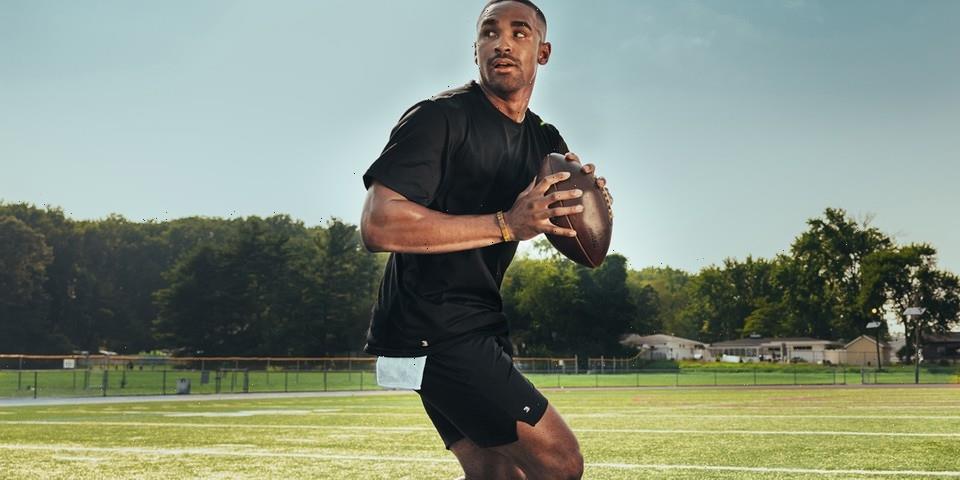 Versatility is key for Jalen Hurts, both on and off the NFL gridiron. The second-year Philadelphia Eagles quarterback is what football pundits refer to as a “dual-threat” signal-caller — he’ll beat you both throwing and running the football. When he’s not leading the Eagles, however, Hurts looks for that same versatility from his apparel, keying in on pieces he can wear for both grueling workouts and regenerative chill sessions.

Ahead of the collection’s debut on the Eastbay webstore October 4th — and the Eagles’ key early-season Monday Night Football matchup with the division rival Dallas Cowboys — Jalen Hurts spoke with HYPEBEAST about being the face of the “Game, Train, Live” line, going from a high school QB who bought his cleats at Eastbay to starring on the cover of the company’s catalog and much more.

HYPEBEAST: Tell us about your personal history with Eastbay — you said you used to get cleats from there as a kid?

Jalen Hurts: Yeah, I got all my gear from Eastbay when I was coming up. They had a lot of items I couldn’t get anywhere else. I’d be so excited to get the catalogs in the mail too, see who was on the cover and what the new gear inside was. No matter if it was cleats or Air Jordans, I always knew I’d find something dope in there.

Those catalogs are a special memory to those of us who came up before social media, aren’t they?

Absolutely. Eastbay catalogs were and are a great platform for all types of athletes, especially the younger kids. There’s value in having a hard copy of something and getting to really see the product in a different way.

Are there any specific catalogs that stick out in your mind?

I wasn’t a kid when this one was released, but I’ll always remember the catalog with Eddie Jackson [Chicago Bears safety] on the cover. He’d just declared for the NFL draft, and he was a senior at the University of Alabama when I was a freshman, so it was so cool to see a teammate front and center.

So how did it feel when it was your turn to be on the cover of the Eastbay catalog?

It was a tremendous blessing. My grandma actually got the magazine sent to her house and didn’t recognize it was me on the cover right away. She called me later and was like “Jalen, that’s you on the magazine?!” [laughs]

“It’s so important to feel comfortable in your clothes, no matter what you’re doing.”

Let’s talk about the collection you’re the face of. Its slogan is “game, train live” — why is it important to you to have garments that can do all three things?

It’s so important to feel comfortable in your clothes, no matter what you’re doing. This line fulfills that need for comfort across all three activities. No matter if it’s hot, cold, rainy, you’re covered. Me personally, I’ll work out in a sweatsuit if it’s chilly, throw some shorts or tights on if it’s hot. Since I’m comfy, I don’t have to think too much — I can just focus on doing my thing.

What are your favorite pieces from the collection?

So if you’re not putting together a gameday tunnel fit, you’re partial to cozy athleisure?

Most definitely. I’ll throw on a sweatsuit from the collection, maybe a crewneck and some shorts. Finish the ‘fit off with some Air Jordans and I’m good to go.

Your personal mantras are “rare breed” and “untamed.” What do those mantras mean to you, and how do they fit into the ethos of this collection?

I created those mantras in college, and they’ve stuck with me ever since. As far as how they fit into this collection, Eastbay really pays attention to my personal experiences and values so I’m able to incorporate different things that matter to me into this collection and to future projects.

The partnership is unique too. It’s not the standard “athlete and sneaker company” kind of deal.

Yeah man. It has a little bit of everything which is really cool. I just want to serve and uplift people around me, give people good products that they can wear before, during and after games, be influential to the youth and keep pushing them to achieve their dreams, and set a good example.

One final question: who’s the freshest dude on the Eagles besides yourself?

Man … [laughs]. I’d have to say DeVonta Smith and Rodney McLeod, in no particular order. I tip my hat to both of them.
Source: Read Full Article