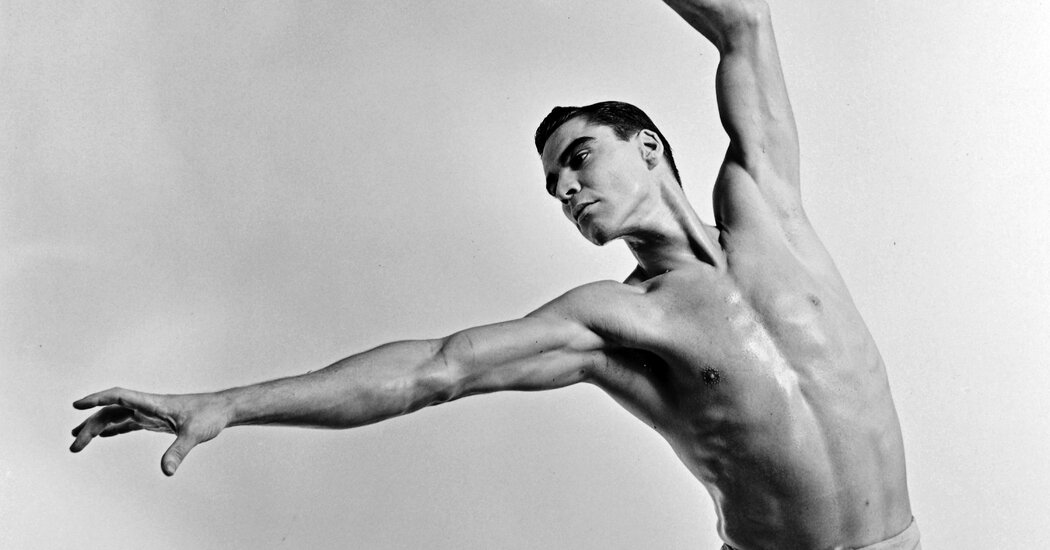 Jacques d’Amboise, who shattered stereotypes about male dancers as he helped popularize ballet in America and became one of the most distinguished male stars at New York City Ballet, died on Sunday at his home in Manhattan. He was 86.

His daughter, the actress and dancer Charlotte d’Amboise, said the cause was complications of a stroke.

Mr. d’Amboise embodied the ideal of an all-American style that combined the nonchalant elegance of Fred Astaire with the classicism of the danseur noble. He was the first male star to emerge from City Ballet’s affiliated School of American Ballet, joining the company’s corps at the age of 15 in 1949, and his expansive presence and versatility were central to the company’s identity in its first decades.

He had 24 roles choreographed for him and became the foremost interpreter of the title role in George Balanchine’s seminal “Apollo” before retiring from the company in 1984, a few months shy of his 50th birthday. He also choreographed 17 works for City Ballet, as well as many pieces for the students of National Dance Institute, a program he founded and directed.

Mr. d’Amboise’s energy, athleticism, infectious smile (which the critic Arlene Croce once likened to the Cheshire Cat’s) and boy-next-door appeal endeared him to audiences and increased ballet’s appeal for boys in a world of tutus and pink toe shoes.

He also helped bring ballet to broader audiences, dancing on Ed Sullivan’s show (then called “Toast of the Town”), playing important roles in several 1950s movie musicals, including “Seven Brides for Seven Brothers” and “Carousel,” and performing in appealing “Americana” ballets, like Lew Christensen’s “Filling Station” and Balanchine’s “Who Cares?” He also directed, choreographed and wrote a number of dance films in the early 1980s. 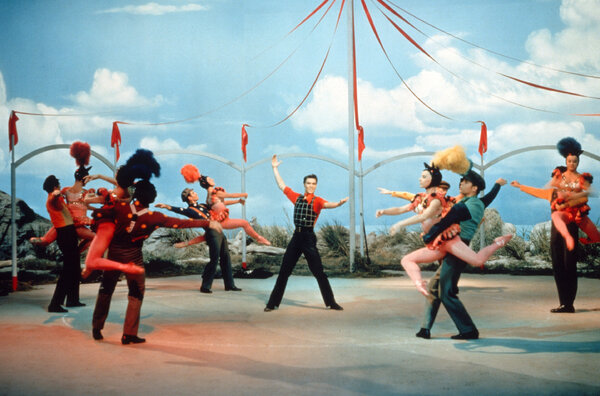 Although Mr. d’Amboise was never considered a virtuoso dancer, his repertoire was demanding and exceptionally broad, ranging from the princely “Apollo” to the swashbuckling Head Cowboy of Balanchine’s “Western Symphony.” He was one of the company’s finest partners, the cavalier to the ballerinas Maria Tallchief, Melissa Hayden, Allegra Kent and Suzanne Farrell, among many others.

Mr. d’Amboise, Clive Barnes wrote in The New York Times in 1976, “is not just a dancer, he is an institution.”

Mr. d’Amboise was astonished when Balanchine invited him to join City Ballet in 1949, a year after the company began its first season. He was 15 years old. “I can’t do it, I have to finish school,” he recalled thinking, in his autobiography, “I Was a Dancer” (2011). His father advised him to become a stagehand, but his mother was delighted by the idea, and Mr. d’Amboise left school to dance professionally, as did his sister Madeleine, known professionally as Ninette d’Amboise.

Although Balanchine was generally more interested in creating roles for his female dancers than for his male performers, Mr. d’Amboise identified with many key roles that Balanchine created in ballets like “Western Symphony” (1954), “Stars and Stripes” (1958), “Jewels” (1967), “Who Cares” (1970) and “Robert Schumann’s Davidsbundlertanze” (1980). Early in his career he also created roles in ballets by John Cranko and Frederick Ashton and won praise for them. (“Balanchine was peeved” about the Cranko commission, he wrote in his autobiography.)

In a 2018 interview, the City Ballet dancer Adrian Danchig-Waring described the qualities that Mr. d’Amboise had embodied as a dancer: “There’s this machismo that is sometimes required onstage — that bravura, that swagger, that confidence, and we all have to learn to cultivate that, and yet it’s such a huge canon of work. Within that, there are poets and dreamers and animals. Jacques is a reminder that all of that can be contained in one body.”

Mr. d’Amboise was born Joseph Jacques Ahearn on July 28, 1934, in Dedham, Mass., a suburb of Boston, to Andrew and Georgiana (d’Amboise) Ahearn. His father’s parents were immigrants from Galway, Ireland; his mother was French Canadian. In search of work, his parents moved the family to New York City, where his father found a job as an elevator operator at Columbia Presbyterian Hospital. The family settled in Washington Heights, in Upper Manhattan. To keep Jacques, as he was known, off the streets, his mother enrolled him, at age 7, and his sister Madeleine in Madam Seda’s ballet classes on 181st Street.

After six months, the siblings moved to the School of American Ballet, founded in 1934 by Balanchine and Lincoln Kirstein. Energetic and athletic, Jacques took to the physical challenges of ballet immediately, and after less than a year was chosen by Balanchine for the role of Puck in a production of “A Midsummer Night’s Dream.”

He wrote in his autobiography of how his mother’s decision had changed his life: “What an extraordinary thing for a street boy with friends in gangs. Half grew up to become policemen and the other half gangsters — and I became a ballet dancer!”

In 1946, his mother persuaded his father to change the family name from Ahearn to d’Amboise. Her explanation, Mr. d’Amboise wrote in “I Was a Dancer,” was that the name was aristocratic and French and “sounds better for the ballet.”

After joining City Ballet, Mr. d’Amboise was soon dancing solo roles, including the lead in Lew Christensen’s “Filling Station,” which led to an invitation from the film director Stanley Donen to join the cast of “Seven Brides for Seven Brothers” (1954).

In 1956 he married the City Ballet soloist Carolyn George, who died in 2009. In addition to his daughter Charlotte, he is survived by their two sons, George and Christopher, a choreographer and former City Ballet principal dancer; another daughter, Catherine d’Amboise (she and Charlotte are twins); and six grandchildren. Two brothers and his sister died before him.

Mr. d’Amboise appeared in featured roles in two films in 1956 — “Carousel,” appearing alongside Gordon MacRae and Shirley Jones, and Michael Curtiz’s “The Best Things in Life are Free.” But he remained committed to ballet and to Balanchine.

“People said, ‘You could be the next Gene Kelly,’” Mr. d’Amboise said in a 2011 interview with The Los Angeles Times. “I didn’t know if I could act, but I knew I could be a great ballet dancer, and Balanchine put out the carpet for me.”

His faith was rewarded when, in 1957, Balanchine revived his “Apollo,” the ballet that had marked his first collaboration with Igor Stravinsky, in 1928, and cast Mr. d’Amboise in the title role. For that production, Balanchine stripped away the original elaborate costuming, dressing Mr. d’Amboise in tights and a simple cloth draped over one shoulder.

It was a turning point in his career; dancing, Mr. d’Amboise wrote, “became so much more interesting, an odyssey towards excellence.” The role, he felt, was also his story, as Balanchine had explained it to him: “A wild, untamed youth learns nobility through art.”

Over the next 27 years, Mr. d’Amboise continued to be a stalwart member of City Ballet, creating roles and appearing in some of Balanchine’s most important ballets, including “Concerto Barocco,” “Meditation,” “Violin Concerto” and “Movements for Piano and Violin.”

Encouraged by Balanchine, he also choreographed regularly for the company, although reviews of his work were mostly lukewarm. He wrote in his autobiography that both Balanchine and Kirstein had assured him that he would lead City Ballet one day, but Peter Martins and Jerome Robbins took over the company after Balanchine’s death in 1983.

Mr. d’Amboise appeared to have been resigned to that outcome: He retired from performance the next year and turned his attentions to National Dance Institute, which takes dance into public schools and which he founded in 1976.

The institute grew out of the Saturday morning ballet lessons for boys that Mr. d’Amboise began to teach in 1964, motivated by wanting his two sons to learn to dance without being the only boys in the class. The classes expanded to include girls and moved into numerous public schools.

Now the goal is to offer free classes to all, no matter the child’s background or ability. Today the institute teaches thousands of New York City children ages 9 to 14 and is affiliated with 13 dance institutes around the world. The institute, which has its headquarters in Harlem, where Mr. d’Amboise lived, was profiled in Emile Ardolino’s 1983 Oscar-winning documentary, “He Makes Me Feel Like Dancin’.”

“This second chapter brought something more fulfilling than my career as an individual performer,” Mr. d’Amboise wrote in his autobiography. Recounting the story of a small boy who succeeded, after many attempts, at mastering a dance sequence, he wrote: “He was on the way to discovering he could take control of his body, and from that he can learn to take control of his life.”

For his contribution to arts education, Mr. d’Amboise received a 1990 MacArthur Fellowship, a 1995 Kennedy Honors Award and a New York Governor’s Award, among many other honors.

He continued to think of himself as a dancer all his life, but he was also a fervent New Yorker. Asked in a 2018 article in The Times where he would like his ashes scattered, he responded, “Spread me in Times Square or the Belasco Theater.”