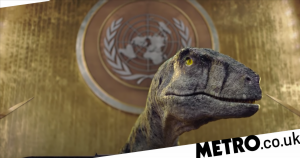 In a bid to hit home the human cost of environmental damage, the United Nations has enlisted actor Jack Black in their latest climate campaign.

Called ‘Don’t Choose Extinction’, the short film opens with a bustling scene at UN HQ, with world leaders getting ready for a conference.

Then, in true Jurassic Park style, the sound of heavy footsteps are heard first, before a CGI velociraptor storms through the doors.

Tail swishing, the ferocious-looking beast stalks the famous General Assembly Hall to calmly takes its place on the podium – but not before asking a very spooked security guard if he’s okay, or whether he ‘needs a minute?’. (Cue another nod to JP with an in your face moment of dino breath steam.)

Starting its speech, the raptor – voiced by Jack Black – says: ‘I know a thing or two about extinction… And, you kinda think this would be obvious, but going extinct is a bad thing.’

Then it quips: ‘At least we had an asteroid – What’s your excuse?’

The dinosaur goes on to urge stunned world leaders to spend their taxpayer money elsewhere rather subsidising fossil fuels, which costs the world annually US$423 billion and causes man-made damage to our planet.

Put together by the U.N. Development Program – the leading United Nations organization fighting to end the injustice of poverty, inequality, and climate change – the campaign hopes to highlight the huge disparity in what countries spend globally on fossil fuel compared to tackling the climate crisis.

Although Jack Black voices the velociraptor in the English version of the video – ahead of his role as Bowser in the upcoming Nintendo movie – other actors have stepped up to take the part in other languages, such as Eiza Gonzalez in Spanish, Aissa Maiga in French and Nikolaj Coster-Waldau in Danish.

With the film being released ahead of the COP26 climate summit next week, the dino ends his speech by saying, ‘So here’s my wild idea… Don’t choose extinction. Save your species before it’s too late! It’s time for you humans to stop making excuses and start making changes.’

To find out more about the campaign, which links insights from across the world, head to www.dontchooseextinction.com