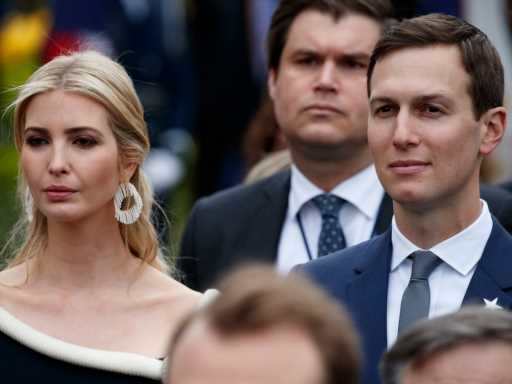 The role of Ivanka Trump and Jared Kushner in the White House has been a topic that has been heavily covered, but they may have believed their influence was more crucial than necessary. Former White House Press Secretary and Chief of Staff Stephanie Grisham’s upcoming tell-all book, I’ll Take Your Questions Now, is shedding a curious light as to how powerful the couple saw themselves during the Donald Trump administration.

In June 2019, the duo reportedly wanted to make sure they were included in Queen Elizabeth’s state visit, which completely defied protocol, according to an excerpt obtained by The Washington Post. The only reason they weren’t a part of the meeting was due to the lack of space in the helicopter — otherwise, they would have tried to muscle their way into hanging out with a member of the royal family. “I finally figured out what was going on,” Grisham says in the book. “Jared and Ivanka thought they were the royal family of the United States.”

Grisham wasn’t a big fan of Donald’s favorite child revealing that Ivanka wasn’t very popular in White House circles. The staff and Melania Trump reportedly called her “the Princess.” The author didn’t stop there with the nicknames either as she dubbed Kushner, “the Slim Reaper,” for taking on other staff member’s projects, sabotaging them and then making them accountable for the mess he made. The former White House senior aide’s revelations shouldn’t be shocking at this point, but it certainly gives a better perspective on the dynamics going on during Donald’s time as president.

Grisham quit on Jan. 6 after the insurrection and it sounds like she is fine burning the Trump bridge with her insider book, but of course, Donald has something to say about it. “Stephanie didn’t have what it takes and that was obvious from the beginning. She became very angry and bitter after her break up and as time went on she was seldom relied upon, or even thought about,” he said in a statement to CNN. “She had big problems and we felt that she should work out those problems for herself. Now, like everyone else, she gets paid by a radical left-leaning publisher to say bad and untrue things.”

While that is an expected response from the former president, we are curious as to how Ivanka and Kushner feel about the dirty details being told about them. They’ve kept a very low profile since their move to Florida in late January, but it looks like Grisham is dragging them out of political retirement with her upcoming tell-all.

Before you go, click here to see the biggest presidential scandals in US History.