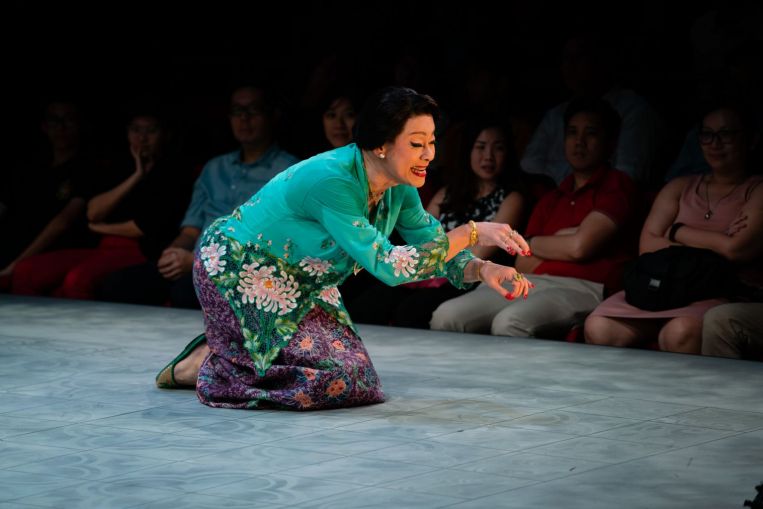 A performer cannot hide on Wild Rice’s new thrust stage at Funan mall. He is surrounded on three sides by audience members who can literally reach out and touch him.

But then, by the same token, audience members too cannot hide in the usual dark anonymity of a proscenium arch theatre.

And therein lies the magic of this production of Stella Kon’s classic play, arguably one of the most staged crowd-pleasers of Singapore theatre.

Ivan Heng, reprising the role of the authoritarian matriarch, has fun playing with the theatre’s new dynamics and it is evident that audiences here will have to learn a new way of interacting in this space.

On gala night, there was more thrust than parry as Heng worked hard to cajole the audience in interactive bits. From playfully singling out someone in the first row for reading the programme instead of watching the action to mock-scolding startled latecomers in a schoolmarm tone, Heng was in his element.

The audience had to scramble to catch up, but by the time Emily’s precious firstborn Richard had his birthday party, everyone was sufficiently cued to belt out Happy Birthday.

Emily is the archetypal matriarch everyone recognises and, over the years, many well-known actresses have taken on this iconic role.

But only one man has tackled the monologue and Heng has evidently found lasting resonance in this work, which tells the life of Emily as she enters the Gan household as a frightened child bride and manoeuvres her way through murky family politics to emerge victorious as the new matriarch, who then weaves her stifling web of care too tightly around her husband and children.

The audience interactions and the set, its banisters and props wrapped in rope and wall draped in filmy cloth that suggests cobwebs, hark back to Heng’s first outing in the role with the late director Krishen Jit.

But there is nothing fossilised about Heng’s lively and nuanced performance. It is a bracing reminder that archetypes survive because they speak to certain dark truths in society. When Emily laments, “a woman is nothing in this world that men have made”, one marvels at how much the world has not changed in this age of #metoo.

BOOK IT / EMILY OF EMERALD HILL

Heng has found new facets to play as his skills have matured. In the tight confines of this space, what impresses are the subtle actorly touches.

Emily as a child taking a deep breath of her father’s scent mirrors a later scene of Emily the mother breathing in her beloved son before he departs for England, a potent signalling of her love and need.

A song – sung three times by Emily as a child, a young matron and an old woman – is a masterful demonstration of Heng’s skill at using voice and manner to suggest character.

But it is in the last scene of an elderly Emily in her lonely house, her memories crowding around her as she flits from one scene of her life to another, that Heng achieves real pathos without conceding Emily’s dignity. This lovingly rendered cameo of a performance fits perfectly in this new jewel box of a theatre space.