Joshua Safran’s “Gossip Girl” reboot filmed a scene from an imaginary work by the “Slave Play” playwright. Then the Public Theater commissioned it. 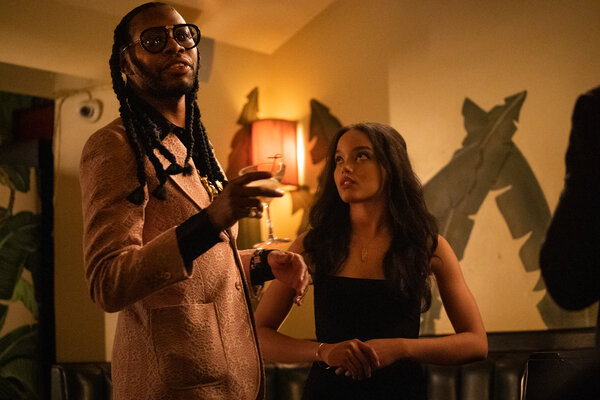 We hear him before we see him come across the screen: Aaron howls and barks then gallops, on all fours, onto a white, wooden thrust stage, ringed on three sides by the audience. This enraged man — the son of Aaron the Moor from “Titus Andronicus” — is stark naked and covered in blood.

“What? What? Have I not arrived as you assumed I would? Like a black dog, as the saying is,” he demands, panting and sniffing, shouting into the faces of the seated theatergoers.

He backs away slowly. “You do know who I am, riiight?” Aaron drawls. “The inhuman dog. Unhallowed slave.”

This intense scene from a play-within-a-TV show commands viewers’ attention in Episode 3 of HBO Max’s “Gossip Girl” reboot. And it’s all courtesy of Jeremy O. Harris, the Tony-nominated playwright of “Slave Play.” Shortly after the episode dropped, though, people began to speculate on social media if the play was real or not.

With a tweet, Harris recently confirmed that “The Bloody and Lamentable Tale of Aaron” is, in fact, a real play. He began writing his dream Public Theater play for “Gossip Girl” after chatting with the show’s creator, Joshua Safran (“Smash,” “Soundtrack”).

Upon seeing the play’s opening scene during the taping, Oskar Eustis, artistic director of the Public Theater — who makes a cameo as an audience member in the episode — turned to Harris and asked, “Can we commission this?” Harris said he had a contract the next day.

“I was dreaming this play into existence,” Harris said in an interview. It’s a play he’s been thinking about for seven years, since he started studying “Titus Andronicus” — his favorite Shakespeare play.

“Titus Andronicus,” thought to be Shakespeare’s earliest tragedy, tells the bloody tale of the downfall of Titus, a Roman general. Titus returns home from war with Tamora, Queen of the Goths, as a prisoner to the Roman emperor; her lover, Aaron the Moor, is in tow.

Tamora gives birth to a child, fathered by Aaron, who then kills the nurse to keep the child’s race a secret and flees with the baby to save it from the emperor. But Lucius, Titus’s son, captures Aaron and threatens to kill the child. To save his son, Aaron confesses to a plot for revenge. Lucius, who is later proclaimed emperor, orders Aaron be buried up to his chest and left to die. The baby, however, survives.