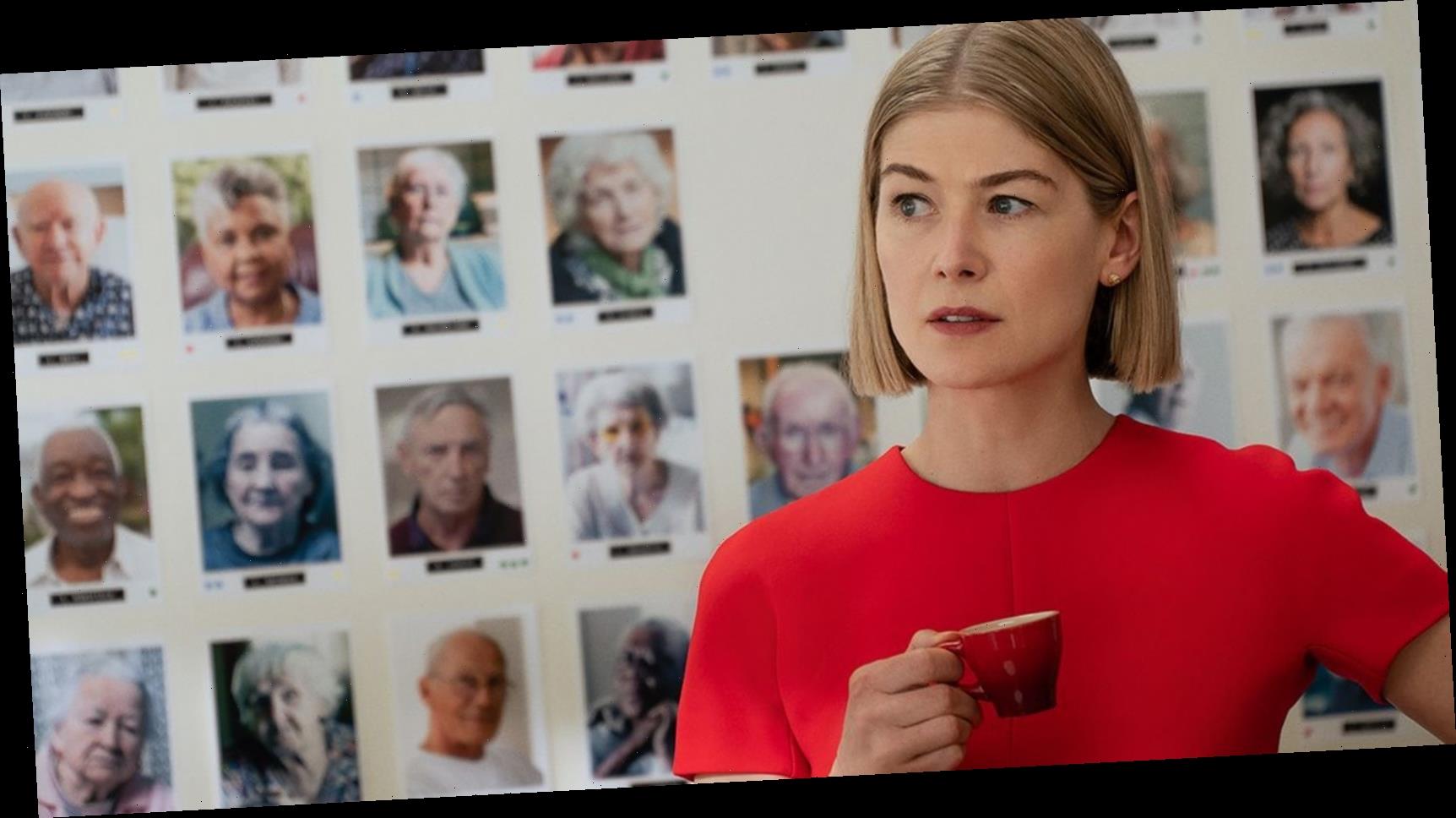 Rosamund Pike’s new Amazon Prime film, I Care A Lot, has something important to say about villains and conservatorships.

We saw it in Die Another Day, when she double-crossed Pierce Brosnan’s James Bond as Olympic fencer Miranda Frost. We saw it in Gone Girl, too, when she tortured Ben Affleck as the dangerously imaginative Amy Dunne.

And in Amazon Prime Video’s sleek and unnerving new comedy-thriller, I Care A Lot, Pike takes on a very different kind of villain in Marla Grayson – albeit still one who’s every bit as diabolically ruthless as we’ve come to expect from the critically-acclaimed actor.

2021 film guide: the new movies coming out this year to get excited about

At first glance, Marla – with her wide blue eyes, razor-sharp bob, and warm, wide smile – simply oozes compassion. In fact, she seems to be exactly what the judge overseeing her case promises she is: “a well-respected professional guardian.”

Appearances, however, can be deceiving. Because Marla is actually a sociopathic con artist, who seeks out vulnerable, elderly people and convinces spineless doctors to issue court orders that place them under her control.

Why? So that she can shove them in a care home, sell off everything they own and hold dear, and siphon the profits into her own bank account.

“All day, every day, I care,” she smiles duplicitously.

Below: watch the trailer for I Care A Lot.

Marla’s power is undeniable – primarily because those she targets are cut off from the world, with no family or friends left to speak out on their behalf. And so it seems to be the case when Marla’s eye falls upon Jennifer Peterson (two-time Academy Award winner Dianne Wiest), who lives in the sort of quintessentially gorgeous house worthy of the hashtag #propertyporn.

Calmly insisting that Jennifer is suffering from dementia, Marla has the woman led away from her home by police and taken to the Berkshire Oaks Senior Living facility. There, Jennifer’s mobile phone is taken from her, her house is immediately put on the market, and she’s forced by doctors and nurses to swallow a potent cocktail of tranquilising drugs.

If you can’t convince a woman to do what you want, then you call her a bitch and threaten to kill her.

As such, she is quickly rendered silent; yet another voice nobody cares to listen or pay attention to. But, as it turns out, she isn’t as isolated as Marla and her lover/assistant Fran (Eiza González) first assumed.

Because Jennifer – yes, sweetly smiling Jennifer – is just like Marla, in that there’s far more to her than her outward appearance suggests. In fact, she boasts an unbreakable tie to ruthless gangster Roman Lunyov (Game Of Thrones’ Peter Dinklage), who dispatches a lawyer to call Marla out on her scam.

The Wheel of Time: Sophie Okonedo and Rosamund Pike to star in new fantasy series

Roman offers Marla an eyewatering $150,000 to let Jennifer go. If she doesn’t, he promises, she will face the direst of consequences.

Marla, unconvinced, calls his bluff. The direst of consequences, as promised, are delivered upon her tenfold. But here’s where this comedy-thriller gets turned upside down; our protagonist – utterly unyielding in the face of death threats, kidnapping, and extreme violence – becomes… well, she magically becomes someone worth rooting for.

“If you can’t convince a woman to do what you want,” she says disparagingly of Roman’s campaign against her, “then you call her a bitch and threaten to kill her.”

Eiza González, Dianne Wiest, and Rosamund Pike in I Care A Lot.

We won’t reveal what happens next because ‘spoilers’ is ever our watchword here at Stylist HQ. Suffice to say, though, it’s the sort of pulse-pounding film that’s guaranteed to knock you off-kilter as you find yourself hating and loving Marla all at the same time.

But that’s why this film is so brilliant; it reminds us that charisma and coercion aren’t mutually exclusive. That wicked people don’t always look and sound like monsters; they can just as easily be smart, capable, eloquent, and beautiful.

And it’s this vital message – tied up in the film’s oh-so-timely tale of a conservatorship being used to strip someone of their autonomy (it’s hard to ignore the fact that I Care A Lot premiered hot on the heels of The New York Times’ documentary, Framing Britney Spears) – which makes I Care A Lot stand out from the crowd.

If we’re looking for monsters, we’ll never find them. But what we can look for are controlling people.

As Janey Starling, co-director of campaigning organisation Level Up – which aims to build a community of feminists and end sexism in the UK, previously explained to Stylist: “Human behaviour is complex and nuanced. But when it comes to abuse, we suddenly seem to forget we don’t live in a cartoon world of monsters, victims and heroes.

“If we’re looking for monsters, we’ll never find them. But what we can look for are controlling people.”

Framing Britney Spears: want to “Free Britney”? Then reflect on your own role in celebrity culture

Marla is many things; she’s beautiful, confident, and articulate – and she has an unwavering sense of self-belief that feels almost admirable.

But she is, indisputably, a controlling person. She’s the sort of smiling predator who knowingly abuses her power to silence others, ruining their lives and tossing them aside like so much trash. And it’s a huge testament to Pike’s phenomenal skill as an actor that she can make all of this abundantly clear, yet still have us confusedly hoping that she makes it through this (undeniably bonkers) film alive, too.

I Care A Lot is now streaming on Amazon Prime Video.