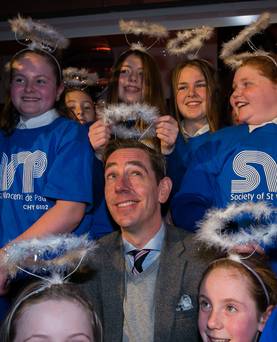 IRELAND’S highest paid presenter Ryan Tubridy has admitted that he is willing to take a pay cut as part of cash-strapped RTÉ’s cost cutting measures.

In 2016, the most recent year for which RTÉ has revealed stars’ pay, Tubridy earned €495,000 for presenting the Late Late Show every Friday and his hour-long show on RTÉ Radio One on weekdays.

Tubridy told Independent.ie that he has taken a salary reduction in previous years and is willing to do so again.

“I’ve taken a pay cut before, I took over 30pc the last time and they’ve asked for more, which would bring it up to about 45pc or thereabouts since I took the Late Late Show,” he said.

“And when it comes to this sort of issue that’s not something I’ve been found wanting in, and that continues to be the case,” he added.

As part of new cost cutting measures by the public service broadcaster, the star’s salary is set to see a further 15pc cut, which would bring his current salary to €420,750.

Speaking at the annual Saint Vincent de Paul Christmas Appeal launch, the presenter, who is an honorary member of the charity, said that he hopes that the public doesn’t forget the need for public state broadcasting.

“I just hope that people don’t lose sight of the need for public service broadcasting,” he said.

“Some of the great programmes, news service, documentaries, entertainment programmes are there and they’re a very important part of the national identity.

“I believe in RTÉ and if it would disappear tomorrow it would be a sad day,” he added.

He also said that he doesn’t read comments online and even if he has received criticism from the public over his pay packet, he isn’t aware of them.

“Fakebook has become really problematic, there’s no responsibility taken as i see it for a lot of these social media platforms, that’s why we need RTÉ.

“Otherwise we have this self serving model of non-news, tampered with by outside forces,” he added.