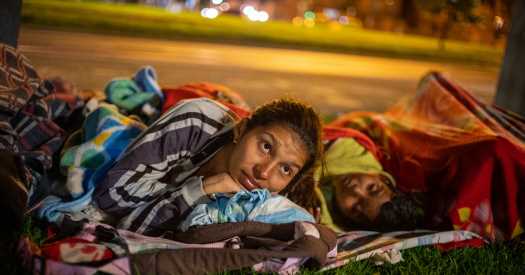 The day we received a text message telling us that Jessika Loaiza was in labor in Colombia, my colleague Federico Rios, a photographer, jumped on his motorbike and drove 18 hours, sometimes through driving rain, to get to her. As the Andes bureau chief for The New York Times, I live in Colombia’s capital, Bogotá, and got in a car to travel a mere 10.

Jessika was a Venezuelan mother living in Colombia who had lost her job amid the pandemic. With her son, Sebastián, 6, she had spent most of the year trekking between the two countries, trying to find a new home. We had been following her for months, aiming to help readers understand the experience of millions of migrants who have been displaced by the economic implosion caused by the health crisis.

As we sped through the Colombia countryside, my colleague Sofía Villamil worked the phones, making sure we would have access to the hospital once we arrived. When we did, we pulled on hospital gowns and fastened two layers of medical masks around our faces, allowing us to document some of Jessika’s first moments with her newborn baby, the child she had carried in her belly for most of the journey.

Afterward, we messaged the journalists Isayen Herrera and Adriana Loureiro Fernández back in Venezuela, announcing the good news: Jessika’s little boy was healthy, and Jessika was doing well. 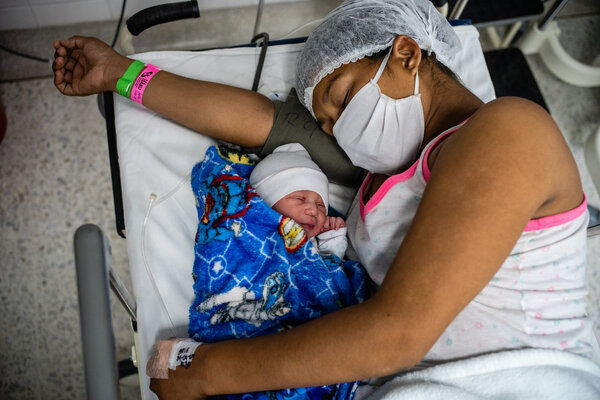 Together, we covered Jessika’s 1,500-mile search for stability. How did we do it?

Federico and I met Jessika in May, while working on another story. At the time, thousands of Venezuelans were streaming out of Colombia, having lost their jobs amid virus-related shutdowns, and we wanted to include this narrative in a larger piece about the way the pandemic was exacerbating inequality across the region.

We first met Jessika and her family on the highway heading out of Bogotá, and I was immediately struck by her maturity. She was just 23 but seemed to be carrying the world on her shoulders. “Where will we sleep?” she wondered. “How will we eat?” And then here was Sebastián, in a wool cap with a teddy bear on the front. He had the curiosity of a child, but was about to make the journey of an adult.

Collectively, they seemed to embody the toll that the virus was taking on the many people around the world whose lives had already been upended by war and political dysfunction.

My editor Juliana Barbassa spotted their narrative in my notes, and suggested we pull out their story and turn it into a separate piece.

Once we decided to stick with them, we were faced with the challenge of keeping in touch over many miles and weeks, not to mention a shuttered border.

Many stories at The Times involve a team — but this one involved a particularly coordinated effort from five journalists working for more than six months, with several of us driving thousands of miles to meet up with Jessika and her family along the route. By the end, the Google document holding our notes spanned 124 pages.

When they could, Jessika; Sebastián; Jessika’s partner, Javier; and her brother, Jesús, were also participants in the reporting process, sending us hundreds of text and audio messages from their journey, sometimes with photographs, often responding to my questions about mundane and major events from the road.

Finally, toward the end of the journey, I gave Sebastián a package of markers and a notebook, a reporting tool that he began to use to document the trek from his perspective, texting us pictures of his drawings, becoming a tiny documentarian-in-training.

After the initial night on the road, Federico visited Jessika and her family twice more along the route in Colombia, joining them in a smuggler’s truck over a frigid mountain pass, and then traveling with them all the way to the Colombian border city of Cúcuta. Along the way, I sent him questions for the family and asked him to share the sounds, smells and textures of the journey, and he responded with audio, videos and photos.

As he traveled with them, I created an interactive document that combined my notes with all of our WhatsApp conversations, and I embedded visual and audio files, all of it in chronological order, so that I could try to recreate the texture of the moment when I sat down to write.

Across the border in Venezuela, the family sent us images from a government detention center where they were being quarantined. Jessika was feeling sick, she said. So were many others at the camp. We began to worry. And then we lost touch.

For weeks we didn’t hear from them, and we knew only that their eventual goal was a house owned by Jessika’s family in or near the city of San Felipe. So we began a search, with Federico calling repeatedly to all the phone numbers the family had used along the route. No luck.

I wrote them all on Facebook, and then started messaging their friends and family online, trying to figure out what had happened.

Finally, we got a hit, and someone told us that Jessika and her family had arrived in San Felipe, but that they didn’t know much more.

I called up my colleague Isayen Herrera, in Caracas, and asked if she would start her own search, and consider going to San Felipe, about four hours away, to look for them. She agreed.

And then we got lucky: The family walked into an internet shop to check if government help had arrived in their Venezuelan bank accounts. That day, Jessika’s brother, Jesús, opened Facebook and began to message us.

Isayen and Adriana Loureiro Fernández, a photographer, then spent several days shuttling between San Felipe and the town of Sabaneta, where Jessika and Javier had settled with Sebastián.

Gasoline and car parts were in such short supply at the time that the country’s major highways had become parking lots, full of broken down cars and stranded motorists.

Through Isayen’s interviews, we learned how difficult life had become for the family in Venezuela.

Our final product, a 2,000-word piece that was published on Nov. 27, is a testament to The Times’s commitment to telling complicated stories in difficult times.

But to me, the most remarkable part of this narrative is that Jessika and her family did all of this — allowing us to follow them for months, to document their most difficult and intimate moments — without ever asking for anything in return.

Jessika, Javier and Sebastián patiently answered all of my questions, even the very painful ones, even the repetitive ones, even when it seemed unclear when any of it would be published. They understood automatically that their story would help many others. And it is because of that understanding, because of them, that we were able to publish this story.

Just days before the story ran, I called Jessika to do some fact-checking, and she gave me some of the first good news I’d heard from her. After they had spent several nights on the street in Bogotá, her old boss had given them a room to sleep in, allowing them to escape the torrential rain that had taken over the city that week. Javier had found a job at a junk recycler. And Jessika had re-enrolled Sebastián in school, with the hope that he could start classes after the Christmas break.

Life was still very precarious. The job paid little, the home was temporary, Sebastián had no way to connect to virtual classes. But for a moment, it seemed that the journey back to Colombia had been worth it.