For Sandra Oh, there’s a throughline connecting her latest role in the Netflix series “The Chair” to a role from all the way back at the beginning of her career, like bookends.

Long before she became the legend and icon behind some of the most richly realized and multidimensional women on television — from Dr. Cristina Yang on “Grey’s Anatomy” to Eve Polastri on “Killing Eve” — and long before her name was on T-shirts, she starred in a small Canadian movie called “Double Happiness.” Written and directed by Chinese Canadian filmmaker Mina Shum, who would go on to frequently collaborate with Oh, the 1994 movie is a slice-of-life portrait of Jade Li (Oh), an aspiring actor in her early 20s.

The movie still feels revelatory all these years later because it’s about a young Asian woman living her life. We see her hanging out with her best friend, figuring out dating, navigating her family’s expectations and trying to find her way in the world. It’s one of those movies I wish I had known about much earlier in my life, instead of only having discovered it earlier this year, as I told Oh when she mentioned the movie during our interview.

In “The Chair,” which premiered Friday, she plays Dr. Ji-Yoon Kim, the chair of the English department at a fictional New England liberal arts college. In both roles, she was able to naturally and unconsciously draw from places within herself, which “felt really good for me,” she said.

When she played Jade, Oh was also in her early 20s, trying to make it as an actor and figuring out whether to leave home. Like Jade, “[I was] breaking away from my family, and then actually having the gift of actually playing it at the very end of the film — you know, Jade basically leaves and separates from her family to go pursue her dreams,” she said. “Yeah, I didn’t have to reach that far for that.”

Both are also fully fleshed characters that happen to be Asian. They strike the right balance between delving into their Asian identities by bringing in culturally specific details — and not being heavy-handed about them or making them the only plot point. Oh’s characters get to be their full selves, which, even now, seems radical. Over the last few years, Asian Americans have had more opportunities to feel seen on-screen. But the roles are still not exactly abundant. Each movie, show or character is still an event.

In a career full of great heights, Oh’s performance as Ji-Yoon marks a new pinnacle. It’s a wonderful showcase of her many talents, and there are so many layers of substance in the character. As the first woman and person of color to lead her department, Ji-Yoon hopes to use her power to change the institution. In reality, the job involves a lot of putting out fires every day and keeping the teetering department afloat. She faces immense pressure on many fronts, from the college’s leadership to her fellow faculty members. Her colleague, best friend and will-they-won’t-they love interest, Bill (Jay Duplass), becomes embroiled in a campus controversy that further jeopardizes the department and tests Ji-Yoon. 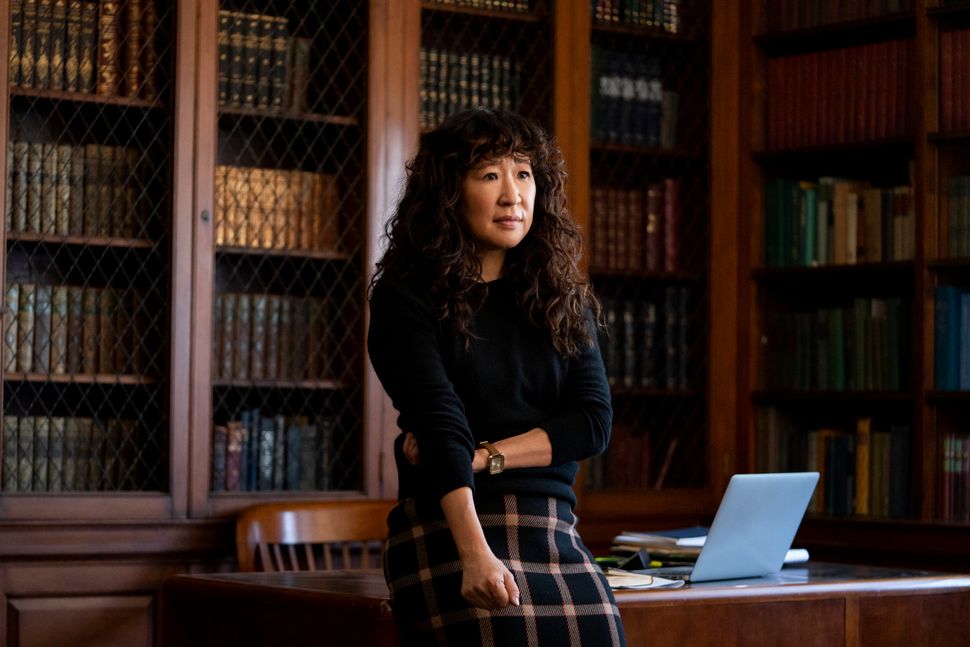 On top of that, she’s navigating her rocky relationship with her young daughter JuJu (Everly Carganilla). One of Ji-Yoon’s challenges as a mother is that JuJu is adopted and of Mexican descent, so Ji-Yoon is trying her best to make sure JuJu’s life includes aspects of both Korean and Mexican cultures. As a single mom, she leans on her Korean immigrant father, Habi (Ji Yong Lee), to help take care of JuJu.

It was particularly in these familial dynamics where Oh could seamlessly infuse culturally specific details into the show. For example, in building Ji-Yoon’s relationship with her dad, Oh told “The Chair” co-creator and showrunner Amanda Peet to keep his dialogue mostly in Korean. It served multiple purposes. Lee felt more at ease speaking in Korean (amazingly, he had never acted before, according to Oh: “He’s a retired, like, insurance dude who lives in Atlanta.”) And it accurately reflects the relationship that many immigrant parents have with their children.

“Mr. Lee speaks perfect English. But there’s a comfort level that I felt like he had as an actor. He is a dad, he knows how to be a dad. Let him speak in his initial language and be as comfortable as possible,” Oh said. “For those of us who speak two languages, or, like, a mix of baby Korean and English, you have to constantly be threading that to have communication with your parent. I mean, that’s just a lot of dynamic storytelling that you get very, very quickly.”

It’s the depth of Ji-Yoon’s relationships that forms the foundation of “The Chair” and makes the show wickedly funny and trenchant. In creating the series, Peet said she thought of it as a workplace comedy, drawing inspiration from movies like “Tootsie” and “Broadcast News,” which are both “dealing with some very intense social issues, but, you know, obviously, neither of those movies feel like homework.”

Peet was interested in exploring generational divides among women, which form the dynamic between Ji-Yoon and her colleague Joan (Holland Taylor), who was once a trailblazer but is now part of the department’s old guard. On the flip side, Ji-Yoon is a mentor to Yaz (Nana Mensah), the only other woman of color in the department and a rising star in their field. Yaz is applying for tenure, and if approved, would become the first tenured Black woman in the department. To Yaz, Ji-Yoon is too much of an incrementalist, trying too hard to appease the college’s leadership and work within the system instead of upending it.

“You act like you owe them something, like you’re here because they let you be here, not because you deserve it. I mean, what are they without us at this point: a name and a pile of bricks?” she tells her in one scene.

When Ji-Yoon says it’s necessary because the powers that be have a “shit ton of money,” Yaz reminds her that it was “seeded by benefactors who got rich off of sugar and cotton and railroads, off the backs of Black people and yellow people.”

“You should be running this place,” Yaz says. “Instead, you’re running around playing nice.” 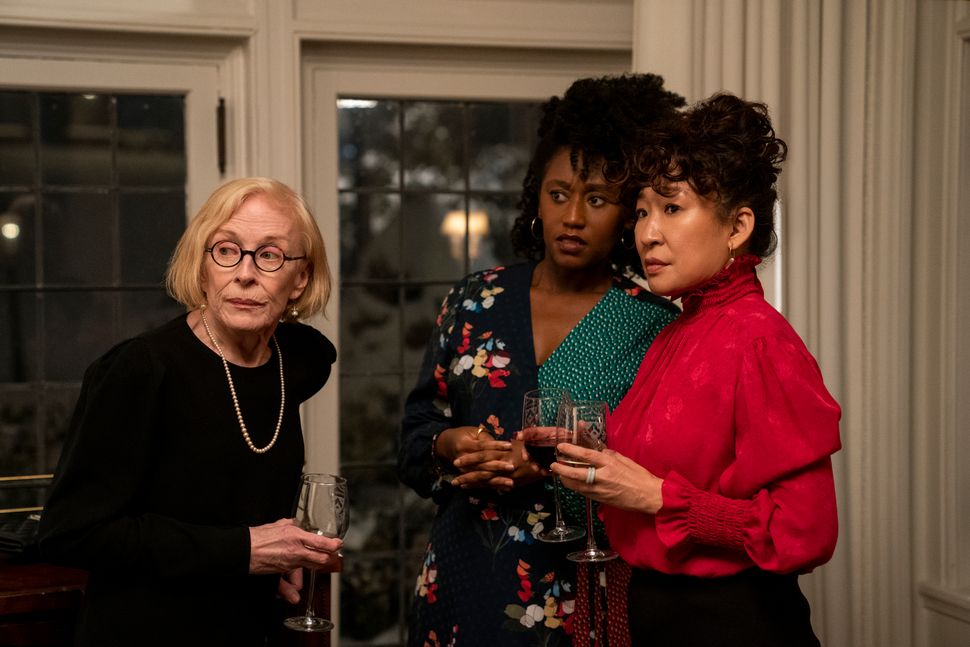 Peet said she has wanted to write for Oh ever since 1998, when she saw her in playwright Diana Son’s “Stop Kiss” at the Public Theater in New York.

“A lot of people don’t talk about this, but there are a lot of actors and actresses who — I’m not going to name names because it would be really scary if I did that — who can’t play a romance,” Peet said. “They just can’t. They don’t know how to have a crush on someone, especially, like, in middle age. You know, it’s one thing if you’re in ‘Twilight’ or whatever, but it’s very important to me that Sandra, to me, is very sensual and romantic, and she’s so full of longing and openness.”

Oh has said that at this point in her career, as she has gained more power and influence in shaping her roles, she is singularly focused on characters like Ji-Yoon and Eve, in which she has incorporated details about their Korean identities in ways that were natural to each show.

It often comes up in small but meaningful ways. At the start of Season 3 of “Killing Eve,” Eve is trying to rebuild her life after being shot by Villanelle (Jodie Comer). So she ends up in a place where she can blend in and seek out the familiar: New Malden, a suburb of London that’s home to many Korean immigrants. We see her folding dumplings as a cook at a Korean restaurant and shopping at an Asian supermarket. 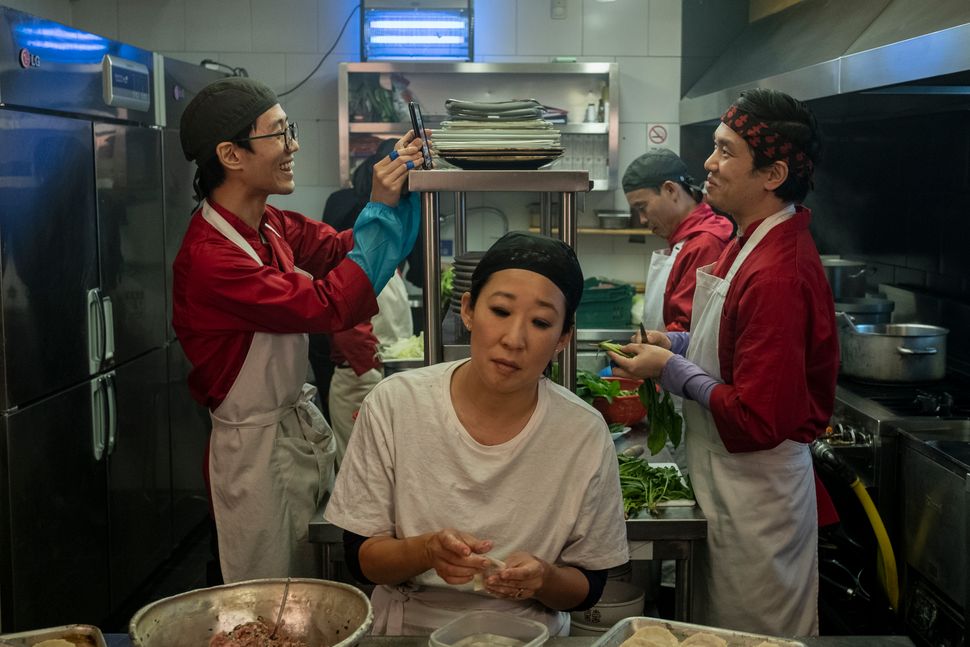 There are small details like this in “The Chair” too, like Korean aunties gossiping about why Ji-Yoon hasn’t married a nice Korean man, and Ji-Yoon explaining to Bill that JuJu couldn’t bring her Hello Kitty stuffed animal to Habi’s house because “my dad still hasn’t recovered from the Japanese occupation!”

Oh said one of her favorite lines is in a scene when an exasperated Habi complains to Ji-Yoon that he can’t take care of JuJu because she doesn’t understand Korean.

“And Ji-Yoon comes strongly back at him and is like, ‘Daddy, you can speak English!’ I felt like I’ve never heard that, you know?” Oh said. “But we say that to each other. It’s like, ‘You need to make the effort, Dad!’”

In one scene, the camera lingers for a moment when Ji-Yoon takes off her shoes before entering her house, which was challenging to film, as Peet recalled.

But as Asians know, it was vital to get the shot exactly right.

“You have to take off your shoes at the front door! You just do it!” Oh said. “[It takes] extra time to show it, but it’s just like, that’s what happens.”

It’s a brief shot. But it feels good to be seen in both big and small ways.

“The Chair” is now streaming on Netflix.