When a YouTuber creator uploads a video to the platform, it’s uncertain how much YouTube will ultimately pay them.

YouTube’s Partner Program lets creators earn money by monetizing their channel with video advertisements. These advertisements will generate a certain amount of money depending on factors like a video’s watch time, length, and viewer demographic.

YouTube influencer and entrepreneur Kevin David, who has aYouTube channel under the same name with 600,000 subscribers, doesn’t consider himself a YouTube star. But that doesn’t mean he hasn’t generated some major revenue on the platform.

David told Business Insider that his how-to guide to usingFacebook ads, with 1.9 million views, made just under $50,000 in Google AdSense. His ” Shopify Tutorial for Beginners” video, which required minimal production because he filmed it using the screen record feature on his laptop, has made over $40,000 in Google AdSense, he said. 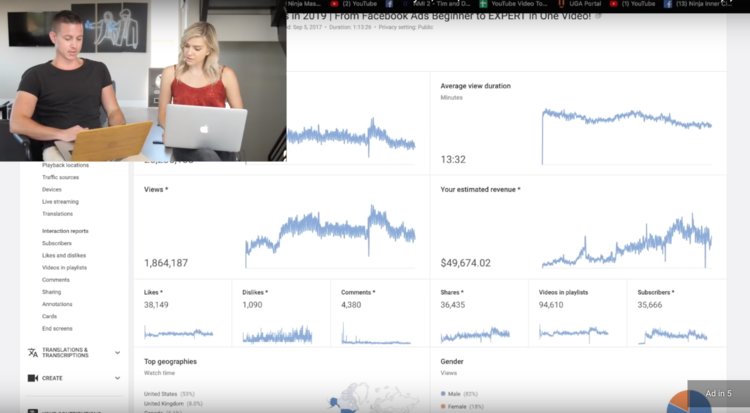 David shared a screenshot of his YouTube dashboard with Business Insider that showed his videos had earned an estimated $31,000 in the last 28 days from 2.4 million views.

David gets the ideas for his content by looking inGoogle Keyword Planner to see how often people are searching particular phrases – and looking at other combinations of video topics and thumbnails that have been successful in view count, he said.

He made his Shopify tutorial video while staying in cheap hostel in Australia, with no camera or equipment.

“Literally just using my laptop and QuickTime to record my screen, which is free,” he said. “That single video earned as much as some Americans are in a year, and I literally just sat down, no editing, free recording software, single take and recorded it.”

Business Insider previously spoke with YouTube star Shelby Church, who is friends with David and has 1.2 million subscribers, abouthow much YouTube pays her for 1 million views. She said her videos with a million views made between $2,000 and $5,000.

Although David’s videos don’t get as many views as Church’s do, his videos are still making more money because of the type of content he produces.

He makes detailed how-to videos, like how to make money online, e-commerce tutorials, and how to sell products on Amazon.

David has a higher CPM, or cost per 1,000 views rate, than an average YouTube creator, because advertisers are willing to pay more for the type of content his videos feature than, say, a YouTube prank video, he said.

“When you post an Instagram picture you get a thousand likes, two thousand likes, but the next day it’s gone and no one ever sees it again,” he said. “I have a video that is close to two years old, and it still, to this day, gets over a thousand views per day and probably generates at least a thousand dollars a day.”

YouTube “is just a crazy monstrous machine, that is very removed from the average business owner, and probably the average person,” he said. “But I think it’s one of the most important things for educating people because of what an incredible tool it can be, if you know how to use it.”

For more about how much YouTube pays its creators, check out the interview with YouTube influencer Shelby Church on Business Insider Prime: