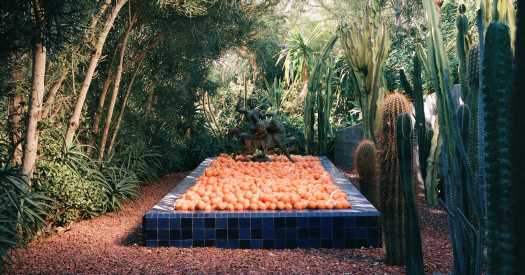 For 20 years, Richard Christiansen hustled. The Australian-born founder of Chandelier Creative, a New York-based creative agency known for its work with major fashion and commercial retail brands, was “pitching, pitching, pitching,” he says, constantly courting new business and traveling between offices in New York, Los Angeles and Paris. He was up early for flights, out late with clients and routinely jittery from coffee and wine. One year, he was JetBlue’s number one flier. “And I was so proud of it,” he says. “But I’m ashamed of it now — because I was living outside of my body.”

March 2020 arrived with a now-familiar story of pandemic upheaval. The agency’s work dried up; Christiansen’s life slowed down; he was not recognized by JetBlue. A line of natural body-care products he had been planning to launch, inspired by the hammamlike bathhouse at Flamingo Estate — his eclectically refurbished 1940s home in Los Angeles’s Highland Park neighborhood — seemed increasingly unlikely. Meanwhile, Jeff Hutchison, the horticulturist who oversees the 150 botanical species that grow on the property’s seven-acre hillside plot, alerted him to the fact that farmers in the area, many of whom typically relied on business from hotels and restaurants, were worried about losing their livelihoods. Christiansen, 44, suggested the growers sell their vegetables each Friday in the parking lot of Owl Bureau, the nearby bookstore he’d opened in 2019. They sold 300 boxes the first week and 600 the next. 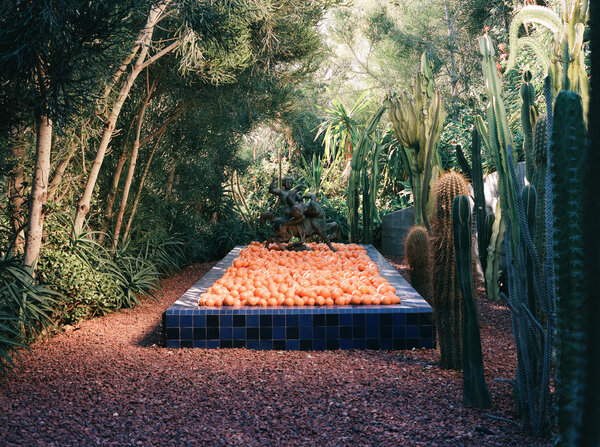 Eventually, someone called the health department, and the makeshift operation had to shut down, so Christiansen and his team pivoted to their current home-delivery model. In addition to offering farmers a distribution platform, a new revenue stream and promotional strategy typically reserved for companies with deep pockets, the Flamingo Estate produce partnerships — which provide customers with a weekly CSA box from exceptional local growers — gave the Chandelier staff a productive outlet during the pandemic downturn. “No one had any work to do, so people got new roles,” Christiansen says, explaining that a typical conversation last spring went something like, “I know you were an art director before, but now you’re in charge of stone fruit.” The design team that had formerly worked on fashion campaigns turned their attention to vegetables, photographing them for marketing materials with high production values and soft lighting, like nutrition porn for the quarantined. “We were really just trying to work it out,” explains Christiansen. “Like the garden, we were growing and listening and changing.” His team soon started experimenting with herbs and plants from his own medicine garden to create new products, such as a rosemary-infused hand sanitizer and a sage-scented candle, for his nascent wellness line. And the brand now sources many of the ingredients for its body-care formulas, along with its fruits and vegetables, from independent farmers who can provide larger quantities. “The volume has far surpassed what we could ever do at my property,” says Christiansen.

In April, he began to invite chefs into his kitchen to develop recipes that would be distributed with the weekly produce deliveries. (These have since evolved into packets that also include crossword puzzles, playlists and a newsletter that shares winsome dispatches about the garden and its owner’s life.) “At one point, I realized, ‘Wow, this is maybe all I’ve ever wanted to do,’” says Christiansen, even if, as a kid growing up on a farm in northern New South Wales, he usually opted to stay inside and watch “Dynasty” while his parents harvested the sugar cane and avocados. In any case, last spring was the first time he was able to truly enjoy the grounds of his home, where bursting succulents, towering aloe and blooming lemon, apricot and fig trees grow amid a maze of winding paths, and where camellias and roses line the bold red cement walkway that wraps around the front of the house, offering dramatic views of the city. “I wanted to take stock of how I spend my time,” he says, “and make choices to let joy in for myself, and pleasure.”

Indeed, Christiansen has come to see pleasure as a human right from which we are often disconnected. And this idea has guided Flamingo Estate’s evolution from a colorful house on a hill to a full-fledged wellness brand that, as of last year’s holiday season, had nearly 50 products on offer in its online store, from freshly baked bread decorated with vegetables by the Los Angeles chef Loria Stern to olive oil from Brosius Family Farms in Paso Robles, artisanal mushrooms from Golden State Papayas Farm in Santa Barbara and a range of herbal face mists, tinctures and bathing products. As someone who spent his entire career strategizing about how to get people to like things, he was stunned by how naturally the brand’s following grew. “We didn’t send an email out for six months. We weren’t paying influencers. We weren’t looking over our shoulder at what other people were doing,” he recalls. “We truly did this so we could blossom — because we were in a pandemic, and wanted to be healthy and happy and meet good people. We almost had to unlearn some of that stuff, because the second it started to feel corporate, it started not to feel true.”

If there is a precedent for Flamingo Estate it is perhaps Daylesford, the organic farm in England’s idyllic Cotswolds area that reaches a wide audience via its farm shops in Gloucestershire and London, hospitality program, cooking classes and e-commerce site (as it happens, Daylesford is the name of one of Christiansen’s two cocker spaniels). But he ultimately wants Flamingo Estate to function as a kind of “Farfetch for the green world,” he says, referring to the international online fashion platform — in other words, a place where growers and makers committed to regenerative agriculture and environmentally friendly practices can reach a larger community.

In the meantime, the brand’s offerings continue to grow. Just over a year after Christiansen’s team started selling vegetables in a parking lot in uncertain times, Flamingo Estate is unveiling a celebratory rosé called Pink Moon. The same shade of blush as Christiansen’s house, the sustainable wine is aged in acacia barrels near San Luis Obispo by the winemaker Kamee Knutson, and has notes of strawberry, hibiscus, frangipani and honey. Christiansen asked Gaetano Pesce, one of his creative heroes, to conceive an accompanying ice bucket, and the Italian designer crafted 25 editions from colorful hand-poured resin that call to mind asymmetrical ice cubes and will be available for purchase with the spring harvest, alongside seasonal produce such as green garlic, rhubarb and mulberries.

In the garden, where a crew led by Hutchison is constantly planting, harvesting and experimenting with new product ideas, a butterfly pavilion, designed for breeding endangered monarchs, is going up this month. (“Since my family is in the honey business in Australia, the topic of pollinators is an important one to me,” explains Christiansen.) Thirty-five drivers now drop off thousands of produce boxes throughout Los Angeles every Friday, and Christiansen has just completed his first round of funding to make Flamingo Estate a business separate from his agency, with plans to expand to New York. Meanwhile, work has returned to Chandelier Creative. And while most of Christiansen’s time is still taken up by talking with farmers and planning harvests and deliveries, he and his team have come back to advertising and branding projects with fresh eyes. “We have a much tighter filter on what we’re willing to say yes to,” he says. “The type of work we’re doing is so much more creatively nutritious. Maybe dipping our toe in the world of natural wonder really helped us in other ways.”