Horror fans, you’re in luck – this year is already home to some rather exciting TV series and movie announcements.

We’ll be the first to admit that when it comes to flicking through film genres on Netflix or other streaming sites, horror isn’t one that we’d typically gravitate towards. It’s a genre that centres on building fear or disgust in its viewers, but as our TV and movie content becomes altogether grittier, horrors seem to be popping up left, right and centre.

And we’re definitely not complaining.

Whether you’re a new convert to the genre or a seasoned fan of all things horror, allow us to take you through the new ones we’re ferociously adding to our watchlist. We’re talking new announcements, those that are coming soon, ones with familiar faces and some with plotlines that may just send shivers down your spine.

If you’ve watched The Haunting Of Hill House or The Haunting Of Bly Manor, you’ll be happy to learn that those very producers are lending their talents to another chilling series. The Midnight Club is based on the beloved Christopher Pike book series, and while it may be labelled as a YA horror series, the recent trailer will certainly leave you looking over your shoulder.

The 10-episode series revolves around a hospice called Rotterdam House where terminally ill teens go to die. They meet secretly each night at midnight and the eight patients become known as The Midnight Club, meeting to tell sinister stories and look for supernatural signs from the beyond.

The Midnight Club will be available to watch on Netflix on 7 October.

The Fall Of The House Of Usher: the team behind The Haunting Of Hill House are bringing yet another horror series to Netflix

Red Rose is described as “an original horror series” and will explore the “intoxicating relationship between teenagers and their online lives”.

As the synopsis reads: “Set in the long hot summer following GCSEs, our heroes’ friendships are infiltrated by the Red Rose app, which blooms on their smartphones, threatening them with dangerous consequences if they don’t meet its demands. The app exposes the group to a seemingly supernatural entity and the seductive, terrifying power of the dark web.

“Red Rose is ultimately a story of friendship, told through the prism of a classic horror-thriller.”

The new series is co-directed by Ramon Salazar, whose credits include the highly successful Spanish language Netflix thriller Elite, so we’re confident that this show will keep us guessing up to the very last moment. It’s being produced by Eleven, the multi-award-winning company behind Netflix’s Sex Education and 2014 Channel 4 thriller Glue.

The release date for Red Rose is TBC.

BBC’s Red Rose: from the same producers as Sex Education, this new thriller explores the horrific powers of the dark web

Emma Roberts may have cut her horror teeth in American Horror Story, but she’s now leading this upcoming horror film with a classic plotline. A mother (Roberts), father and infant son move in to a remote farmhouse and – you guessed it – the house isn’t quite what it seems. A double homicide and suicide had taken place in the house, but it doesn’t deter the family from moving in.

However, they soon discover a dark, tragic history, and as well as possessions in their home mysteriously disappearing, an enigmatic neighbour and terrifying noises coming from parts of the house, Roberts is left to piece together what went on in that house for herself.

Abandoned is set to be released in cinemas on 17 June.

If you’re a horror fan, you’ll know that the news of this popular movie coming to Netflix is major. The hit film is the highest-grossing Taiwanese horror movie of all time, having first been released in March in Taiwan.

It’s been described as “the scariest Taiwanese film ever” and is being released internationally on the streaming platform this July.

The film is inspired by a true story – always an eerie sign for a good horror – involving a family of cult worshippers in Kaohsiung, Taiwan. The film is shot in a mockumentary style and is interspersed by found footage and actors breaking the fourth wall to address the audience. A sequel has also been announced.

Incantation will be available to watch on Netflix on 9 July.

The term “comedy horror” may not immediately strike you as the most appealing (or make that much sense) but trust us, you’ll want to count down the days till this one is released.

New Sky series The Baby explores the intriguing premise of becoming a mother when you really don’t want to be one. Michelle De Swarte stars as 38-year-old Natasha, who is furious that her closest friends are all having babies.

As the synopsis reads: “When she is unexpectedly landed with a baby of her own, her life dramatically implodes. Controlling, manipulative but incredibly cute, the baby twists Natasha’s life into a surreal horror show.

“As she discovers the true extent of the baby’s deadly nature, Natasha makes increasingly desperate attempts to get rid of it. She doesn’t want a baby. But the baby definitely wants her.”

The Baby comes to Sky Atlantic from 7 July, with all episodes streaming on NOW.

Sky’s The Baby: the new trailer for the comedy horror series has a seriously unnerving question about motherhood

Now, we already know that Jordan Peele is one of the best directors out there and is reshaping everything we thought we knew about horrors. With modern iterations of the genre like Get Out and Us, we’re certain that Nope will join the canon of Peele movies that will leave us freaked out in the best possible way.

Apart from Daniel Kaluuya, Keke Palmer and Barbie Ferreira in starring roles, the film remains largely an enigma. What we do know, though, is that it’s eerie, otherworldly and looks like one hell of a promising watch. It’s being described as a reimagining of “the summer movie with a new pop nightmare” and an “expansive horror epic”. Here’s to counting down the days until its release at the end of July.

Nope will be released in cinemas nationwide on 22 July.

Pete Davidson on the set of The Home.

When we heard that this new movie was coming from James DeMonaco, creator of The Purge, we were excited about a film that would keep us firmly on the edge of our seats.

Saturday Night Live’s Pete Davidson stars as Max, a troubled man who starts working at a retirement home and realises its residents and caretakers harbour some sinister secrets.

He embarks on an investigation into the building and it leads to his discovery of a forbidden fourth floor. Of course, he explores the mysterious floor and it’s there that he starts to discover connections to his own past and upbringing as a foster child.

The Home’s release date is TBC.

Winnie The Pooh: Blood And Honey 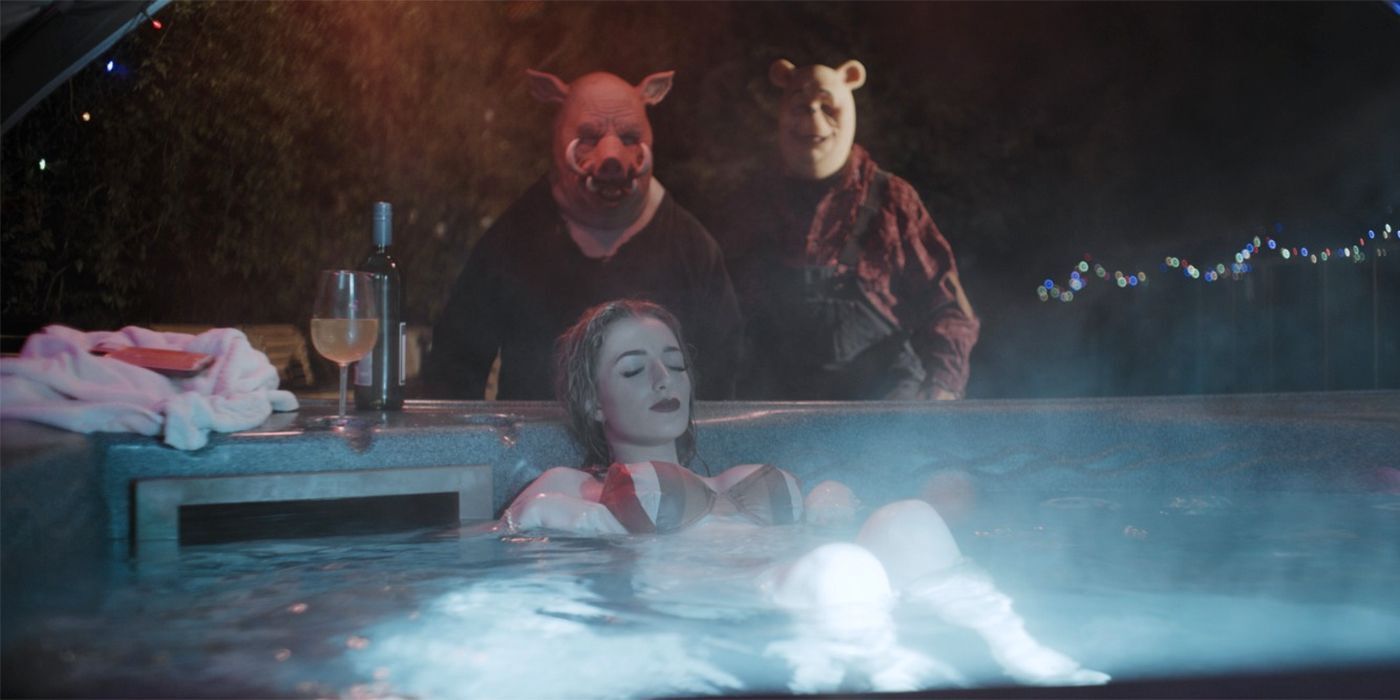 The first look at Winnie The Pooh: Blood And Honey.

We can’t quite believe that we’re writing this but forget everything you knew about Winnie The Pooh and prepare to replace the fun-loving image of childhood with something a lot more… chilling.

This slasher thriller will explore the beloved AA Milne characters in a whole new, murderous light. The story will follow on from when Christopher Robin leaves Pooh and Piglet for college, leaving the pair neglected and forced to fend for themselves. They go back to their animal roots, become feral and resort to hunting prey and eating their victims. In a sad turn of events, they even eat poor Eeyore in order to survive.

The film will flash forward to years later when Christopher returns with his wife to find that his old friends have set out on a murderous rampage targeting college girls. The plotline is enough to leave us suitably shocked and intrigued, so you bet we can’t wait to watch this one.