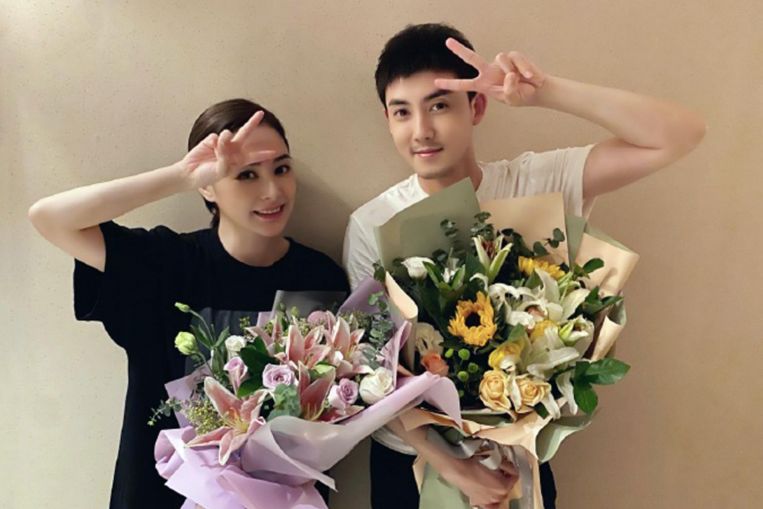 Less than a week after her head injury, Hong Kong star Gillian Chung has quietly returned to work.

Last Saturday (Sept 12), Chinese actor Ray Zhang’s agency posted two photos of the two of them together, holding a bouquet of flowers each and flashing V-signs.

Chung’s gesture covered the spot of her injury, but she was smiling in the photos.

The agency wrote in Chinese: “Congratulations to Ray Zhang for completing the shooting of the film, as he rushes to the next show. Very happy to be working with great beauty Gillian Chung. Wishing you a speedy recovery.”

Chung, 39 was acting with Zhang, 33, in a show which was supposed to wrap filming on Sept 7.

However, the actress-singer, one half of Cantopop duo Twins, had an accident that day in her hotel room in Xiamen, China. She felt giddy while going to the toilet and lost her balance, hitting her head against a marble structure.

Her wound was reported to be 6cm long and she required dozens of stitches at the hospital. She then went for a second operation by a top plastic surgeon, one with hundreds of stitches, to reduce the likelihood of scarring on her face.

Chung’s manager Mani Fok told the Hong Kong media she initially wanted to resume filming immediately after her injury, but she was advised to rest for a few days before doing so.

The singer was said to have taken medicine to reduce the swelling before the day of filming and was praised by the crew for her professionalism.

Ms Fok added that Chung still has one more movie to film in China before she returns to Hong Kong.