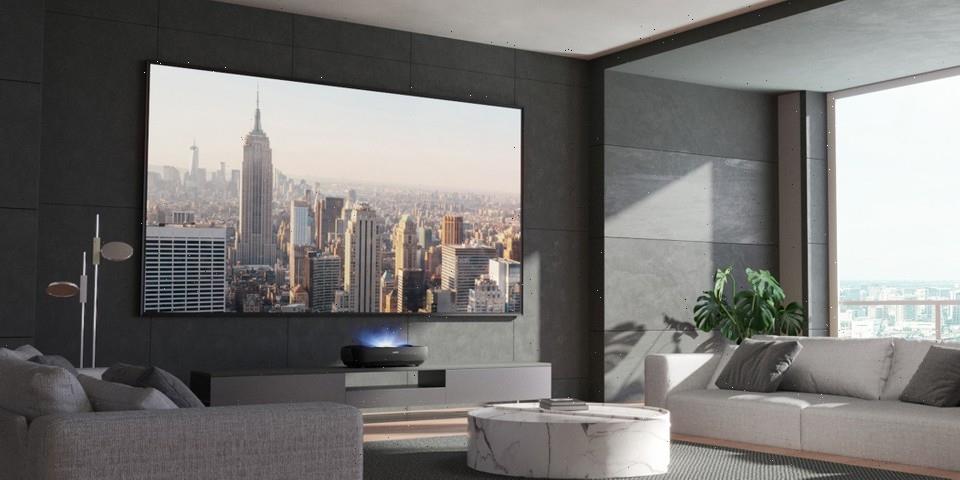 Hisense is on its way to becoming a household name in the realm of technology with the astoundingly large and crystal-clear Laser TV. Taking a trip to the movies or setting up tricky projectors are now things of the past, as the Laser TV brings an immersive experience right into your home at a reasonable price point.

The burgeoning brand assures at-home tv viewing experiences will be forever changed by the Laser TV. This new television technology employs lasers to provide ultra-short throw projection on a whopping 100-inch screen that is sure to make friends, family, and neighbors envious. Although the Laser TV is revolutionizing the modern at-home experience, the technology was created back in 2014. Just as flat-screen televisions were beginning to exponentially increase in size, the Laser TV came along to blow them all out of the water.

Most large flat screens are of adequate quality, but along with them comes a disheartening dent in the wallet. Projectors provide a cheaper alternative, but their setup can be laborious and tremendously time-consuming. Hisense’s Laser TV improves upon all of these shortcomings — not only is it impressive in size but it can be conveniently and intuitively set up in many different spaces.

The L9G Trichoma Laser TV will surely steal the show at Super Bowl parties and neighborhood hangouts, boasting a 100-inch diagonal screen and red, green, and blue laser beams which show off impeccable 4K resolution. This technology truly changes the game — it even unveils new colors that other displays don’t have the ability to show.

Along with just about every hue imaginable, the television comes equipped with a special screen that prevents that pesky glare, a built-in soundbar that is thunderous enough to muffle the sound of kids running around the house, and incomparable stylish features. The L9G comes in classy ebony black with brushed metal accents and soft curves. The front speaker is wrapped in a salt-and-pepper cloth mesh with a shiny Hisense logo attached to it. A white light glows when the tv is turned on and sub-surface metallic flecks bring the whole set together.

The Laser TV’s list of state-of-the-art features does not end there, as it also has HDR, Dolby Atmos, Dolby Vision, HDMI 2.1 ports, and Android TV OS for streaming apps. All of this is packed into a compact, 20-pound system that truly represents the future of television and movies, endorsed by tech experts and home movie lovers alike.