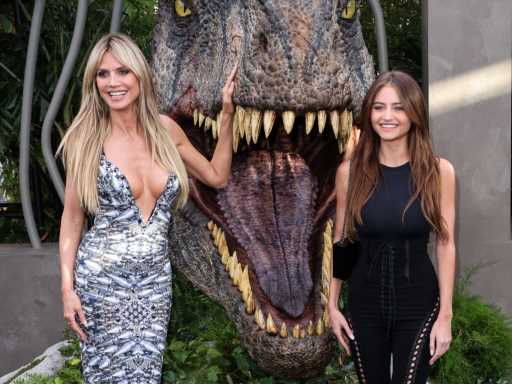 There is no doubt that Heidi Klum is a proud mom when it comes to her daughter Leni. She’s often promoting her 18-year-old’s latest modeling job as the teen follows in her mom’s catwalk footsteps. With her recent graduation from high school, Heidi is also dealing with her daughter leaving the nest and spreading her wings — and her career.

The 49-year-old America’s Got Talent judge revealed that Leni is going to be making the East Coast her home base to expand her job opportunities. “She’s moving to the Big Apple. It’s kind of my first stomping grounds, so I feel like she’s doing it all over again,” she said on The Today Show. “I’m so proud of her!” When Leni was growing up, Heidi made it very clear that her lookalike daughter had to wait until she was 16 years old to get into the fashion industry, but ever since then, her career has taken off.

“She has been [modeling] for the last year, which is incredible,” Heidi gushed. “She walked for Dolce & Gabbana. She’s actually, in a few weeks, doing the show again in Sicily.” Modeling isn’t the only item on Leni’s agenda because she will also be continuing her education in New York City. Heidi didn’t mention where she is enrolling, but she’s “super excited for her that she gets to do all the things that she wants to do.”

Leni’s recent successes, including a Fila shoe campaign and mother-daughter Harper’s Bazaar Germany covers, show that  the teen has a promising career ahead of her. She’s thrilled to carry on her mother’s legacy, but she’s also asserting her independence in a city that helped define Heidi’s career.

Before you go, click here to see kids who are following in their supermodel moms’ footsteps.