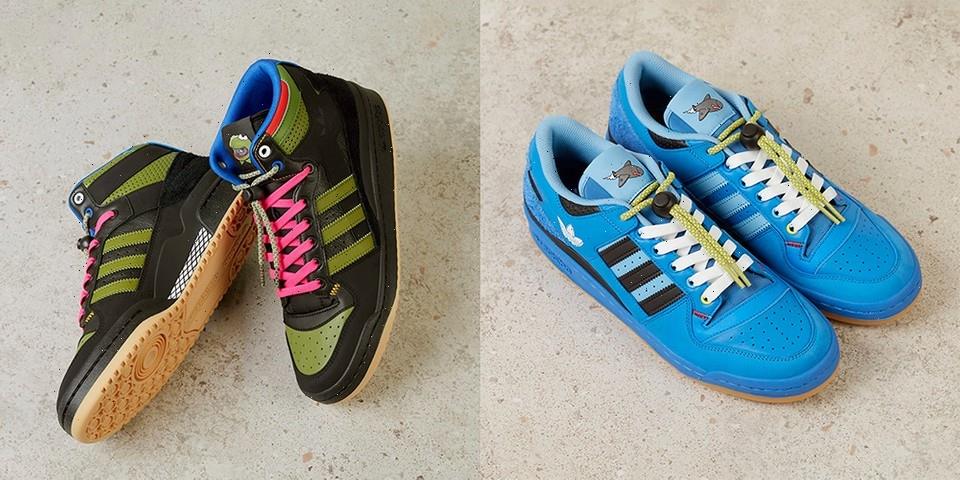 Chicago-born artist Hebru Brantley depicts a powerful world, one that comments on cinematic Blaxploitation and science fiction and uses these themes to celebrate Black culture, notably featuring his signature characters such as Frogboy and Rocket to champion Black heroes and futurism. Now, the artist’s inimitable aesthetic informs an upcoming collaboration with adidas Originals, which sees Brantley reinterpret two iterations of the Forum.

Taking on the Forum Low, which appears in “Light Blue/Core Black,” and a Forum Mid RT in “Core Black/Tech Olive/Cloud White,” Brantley gives the sneakers a new lease of life, one injected with his bold color palette, characters, and a heavy dose of fun.

Sneaker collaborations are becoming more expressive and enjoyable in recent times, especially under the adidas family. Bad Bunny’s Forum PWRs are proudly OTT, as were the recent HU NMDs from Pharrell. Brantley’s sneakers are no exception here, with the Low featuring a Rocket motif on the tongue that’s situated alongside lime green toggle-equipped rope laces. A smooth suede upper is littered with perforations, while a 3D-sketch Trefoil logo on the lateral side adds another visual easter egg. Likewise, the heel has been done out in hairy suede for a contrast in textures, and a Rocket hangtag has been added to complete the look.

As for Brantley’s Forum Mid RT, we find a Frogboy graphic on the tongue alongside hot pink flat laces and a “Tech Olive” toggle-bearing rope lace. Another Frogboy hangtag can be found, while further depictions of this character print themselves all over the insoles.

Hebru Brantley’s adidas Originals Forum collaboration is set to release on July 14 through the adidas CONFIRMED app. Pricing ranges from £110 GBP for the Low to £130 GBP for the Mid RT (approx. $130-$150 USD), and everything can be seen in more detail above.