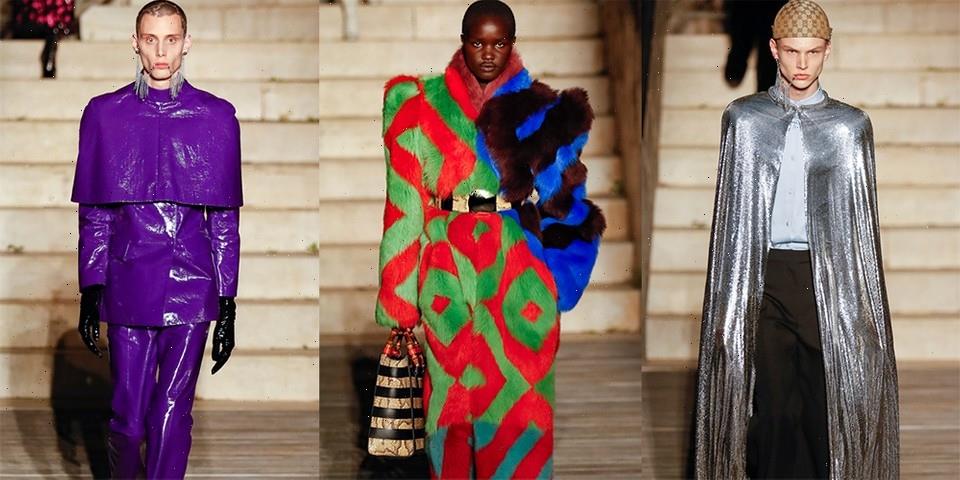 Alessandro Michele‘s references are seldom decipherable, typically littered with far-reaching metaphors and hyperbole that create an air of extravagance, joie de vivre, freedom and opulence. For Gucci Resort 2023 Michele looked to the stars, delivering “Cosmogonies,” a galactical array of looks that are both typical of the house and its designer, yet also performative and transformative, showing that there is no fixed aesthetic to Gucci — rather simply, an attitude.

“Cosmogonies” was born after Michele read the German philosopher Hannah Arendt’s essay on Walter Benjamin. The two shared an intense intellectual exchange and bond, and following Benjamin’s death in the early 1940s, Arendt published her biographical diary that recalled who she called a “precious Pearl Diver,” while also recalling the moment the Gestapo confiscated Benjamin’s library. It was something he could not live or function without — as Michele refers to Arendt in his collection notes, “How was he to live without a library, how could he earn a living without the extensive collection of quotations and excerpts among his manuscripts?”

Michele continues to note: “Benjamin, after all, is a collector of quotations. He discovers them from the depths of the sea and he brings them back on the surface of the water, as rare and precious pearls. He reassembles them, like shreds of thoughts that need to be recomposed, reconstructed, updated. Retying knots through a passionate remodeling, unveiling interrelations and articulations. Such an extraordinary ability to illuminate connections, which would otherwise be invisible, makes Benjamin the paradigmatic figure of those thinking in constellations. A term that he turns into a philosophical concept. What can seem, at first sight, atomized and dispersed, like the stars in the sky, through Benjamin’s eyes becomes an assembly of complicity: a connective structure that lights up the darkness through the epiphany of a constellation.”

It’s this, the metaphor of a constellation, that inspires Gucci Resort 2023. A constellation born out of tension and a desire, eagerness, wanting for casting a light on something real — like a constellation itself. Michele takes it further once more, looking into constellation thinking, a concept of bringing the past and present together as one. Per the designer, these are “previously unknown configurations of reality that can break the constraints of tradition.”

Throughout the collection, which was showcased in the palatial Castel del Monte, an octagonal, monolithic castle in Puglia, the idea of constellation thinking came together. Thinking about bringing the past to the present, combining the two to contextualize Gucci’s future, became clear.

It wasn’t as simple as using traditional materials or fabrications and cutting them in a contemporary way for an Instagrammable moment, no. Michele’s use of faux furs, crystal embellishment, floral appliqué, leather adornments, Victorian ruffles, and more were put into a contemporary context.

In the case of ruffles, what usually appeared around high-profile figures’ necks now became humble cuffs on extreme dagger-collar satin white shirts. A boudoir, and the private moments that lie within it, were on full display with thigh-high bondage-tinged nude lace boots paired with sinched and exaggerated babydoll dresses, or the full sheer crystal-covered cape.

Menswear was equally out of this world — a black leather trench was somewhere between a 1920’s reporter on the beat and the covering of one’s look as they aim for Berghain. Elsewhere, constellations of crystals adorned denim shorts, bringing a sparkle to even the most mundane of garments, while a faux fur coat in black and gold was sexy and angelic, yet devilish too, as if it hid a secret underneath.

Likewise, a shimmering silver lamé cloak was almost godly and angelic once more, while the sprawling bouquet that spread across sheer men’s tops in ruby red crystals once again channeled Michele’s vision of an old-meets-new aesthetic inspired by the dazzling magic of a constellation.

In complete contrast, a puffy quilted red down coat, constructed with suede lapels and corduroy trims, paired with baggy slacks, rivet-covered sandals and a tight fisherman’s beanie absolutely flipped the script, as did the grey suit that was paired with knee high strap-buckle pumps. Bringing the collection back to the celestial realm was a suit covered in a constellation of crystals, organized organically to echo the theme, while completing the runway was a purple patent-leather clad model, looking almost alien-like with his black leather gloves and mouth-dangled crystals elevating the look once more.

Gucci “Cosmogonies” can be seen in the gallery and video above. For more breathtaking fashion, check out Louis Vuitton’s Cruise 2023 show.
Source: Read Full Article