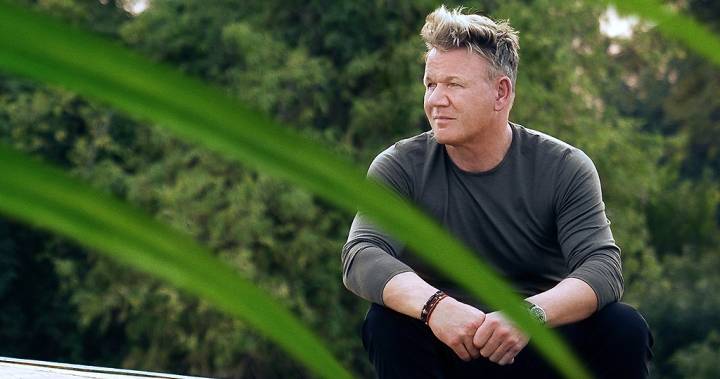 Without a doubt, Gordon Ramsay is one of the most famous chefs on the planet. He’s all over the TV as the star of multiple cooking reality shows, and now he has another one — National Geographic’s Gordon Ramsay: Uncharted.

This one’s different from the rest in that Ramsay is travelling around the world to various remote and untouched locales to uncover cuisines that viewers may not have heard of. Along the way, the masterful chef employs cooking techniques, often using ancient methods, to make the food in the way it’s always been prepped.

Ramsay is adapting and bringing us along on his learning journey.

Global News spoke to the chef over the phone, and he told us about his favourite Canadian food and explained why his new show isn’t a ripoff of Anthony Bourdain’s Parts Unknown.

Global News: Recently, you said that you’ve learned a lot filming this new show. Did you have in mind where you wanted to go when the show began?
Gordon Ramsay: For me, Uncharted was diving into those unknown secrets and getting offbeat, away from the touristy parts, embedding myself in that community and, from a chef’s point of view, getting close to the source — I’ve spent the last two decades with the most amazing ingredients arriving on my doorstep, so to turn that in reverse and to go to the source. We also have that responsibility as a chef for sustainability, and I think I’ve always been a big advocate with seasonality, and some of these ingredients that I came across in many countries, they stay there, and well done for that.

So, I’ve tasted ingredients across this show that I’ve never tasted before. The high-altitude fruit farm, tiny farm in the mountains of Peru, the intense flavour was extraordinary. We’ll never get to buy that ingredient in London.

Gordon Ramsay and a local farming family dine together and enjoy Lawa de Chuno, a classic Peruvian dish made with local ingredients in Peru’s Sacred Valley.

The format of this show was mainly popularized by Anthony Bourdain, among other chef travellers in the past few years. How differently have you done Gordon Ramsay: Uncharted?
I think we came under a little bit of flak when we announced Uncharted a year ago. First of all, Tony [Bourdain] was a great friend of mine, and we shared many a time across the table with a glass of wine, and such a tragic loss.

I would never, ever attempt to copy anybody in their profession. Back in 2004, I started my journey from visiting Cambodia, the most amazing southeastern Asian islands, Vietnam and then spending three months in India from north to south and a week in an ashram in Kerala and understanding how to perfect vegetarian cuisine, and so I was more upset with people criticizing Uncharted without having seen it. Now that the program’s out [in the U.S.] and clearly been successful and rated very well, I’m at peace because it’s good for them to see there’s no comparison. It’s completely different. And it’s me doing what I do best — an adventure with food, understanding cultures and from becoming an amazing prolific chef to becoming a teacher, to becoming a pupil, stripped of everything I know and putting myself into that area of their expertise, for me, was a dream come true.

Do you think Instagram is in some way ruining the modern restaurant experience because people are going to be more interested in taking pictures of food rather than eating it?
It’s a double-edged sword because of the intrusion of social media. There are certain chefs who go up in arms when people take pictures. I’m the opposite. I quite enjoy them taking a picture because it’s a memory that they have on their phone for the rest of their life, providing it doesn’t become too much of an intrusion with flashlights going off every two seconds.

The other issue we have is that they are paying for it so they can do what they want with that food. I use Instagram a lot, especially with my chefs. If I’m in the middle of Barcelona and I’ve just come across the most amazing tapas bar and I want to send them this extraordinary dish or this incredible tart, I’ll send them a picture, and seconds later they have it. We don’t copy, but for inspiration purposes, I use that level of technology.

The first thing we do is we eat with our eyes, OK? Then, you know, it’s that level of attractiveness. Once it goes past that aesthetic beauty, and you’re missing out on the flavour profile, that’s where food’s been taken too far.

People you meet on the show cultivate traditional foods. What was a typical food at your home when you were a child?
I spent very little time in Scotland, but I grew up in Stratford-upon-Avon in the Midlands. First of all, I was always told to leave food was rude, and we didn’t have a choice. We didn’t have a starter, a main course and dessert. Dessert was a special thing once every two or three weeks.

My mom was a cook in a restaurant in the High Street in Stratford-upon-Avon, and so she would cook things like ham hock and do the most amazing ham hock soup with fresh barley. We’d do things like a steak and kidney pie. We would do things like a traditional roast. She tried to introduce us to poached tripe in milk with onions; that didn’t go down too well. [Laughs] Then simple stuff, modern Italian fare with a rich Bolognese spaghetti. But the classic thing on the weekends was a roast, and it wasn’t an expensive cut, it was either a tri-tip or the bottom end of a sirloin. So very traditional.

Did you expect this journey to also be so physically challenging? Can you talk about that aspect of the whole experience?
I’m a motivated, disciplined person and so I like to get A to B using the most energy as possible. I also like to discover things as opposed to having things mapped out for me. Did I think it was going to be this physical? Not really.

The strength of the Mekong and canoeing down those rivers was insane. Scaling mountains and then climbing mountain faces, especially in Alaska; I’d never climbed in my life. Then rappelling down a waterfall: when they say it’s a descent — 30, 40 metres — I didn’t quite understand how powerful that water was coming on you as you’re rappelling. I went offbeat and I got very physical in a way that I enjoyed. The destination, in terms of what we discovered, was mind-blowing. I think like anything in life, if you want the best then you have to work for it anywhere you are, and food’s no different.

When you came to these countries, did they know who you were, considering the impact of television these days?
Some of these places were so far off the beaten track they had no idea who I was, and that was refreshing, not just in a personal way, but professionally, because there were no distractions. I think when they saw me work and the effort I put into it in order to show them that I’m keen to understand what’s going on… was pretty insane because it was just refreshing to be a normal person working hard in their environment trying to understand what’s gone on before I got there. There were several places that we were recognized, and that, I don’t know, it’s always a hard thing because you don’t court that adulation. I like to keep a cap on and I stay pretty remote.

Going into restaurants when we got into bigger towns or cities, I’m a firm believer in looking at the underbellies, looking at the dark horses and the ones that are the underdogs that don’t have a lot of financial support and are out on their own. That incredible journey for a young chef in their first business is the most crucial. I’m a big supporter of that and I’ve been in those shoes before. I like to go through the back door and give them as much support as I can to help them be put on the map.

We just got the green light on Season 2. We’re now planning countries as far away as Tasmania, Indonesia, Jamaica, South Africa and, again, places that are culturally laced with some of the most exciting, incredible cuisines ever.

I have to ask: what are your thoughts on Canadian cuisine?
Amazing. Canadian cuisine, for me, is like British cuisine. We never got a look-in for years because you have the U.S., and we have France next to us, so we were the underdogs. The time I spent in Vancouver was just extraordinary. I remember working with Araxi restaurant in Whistler, and the exciting thing was everything was sourced within 100 miles. Now, I’m not talking just the food, I’m talking about the dairy and even the wine. How cool is that for that restaurant to be on a pedestal and literally depending on everything sourced within 100 miles for its menu? If only that could become a template for restaurants on the planet globally, it would be a dream come true. Can you imagine the level of sustainability?

Then I think of that multicultural, burgeoning hodge-podge, what’s going on in Toronto. Toronto, I’m a big, big, big supporter of, and the cuisine there now is second to none. If you want to dive into that French counterpart, then Montreal is like a cross between Paris and Lyon. So [I’m] a big, big, big lover of Canadian cuisine. And there’s no boundaries, that’s the exciting thing. B.C., Vancouver would be the place that I would retire tomorrow, but I’m too young. [Laughs]

[This interview has been edited and condensed.]