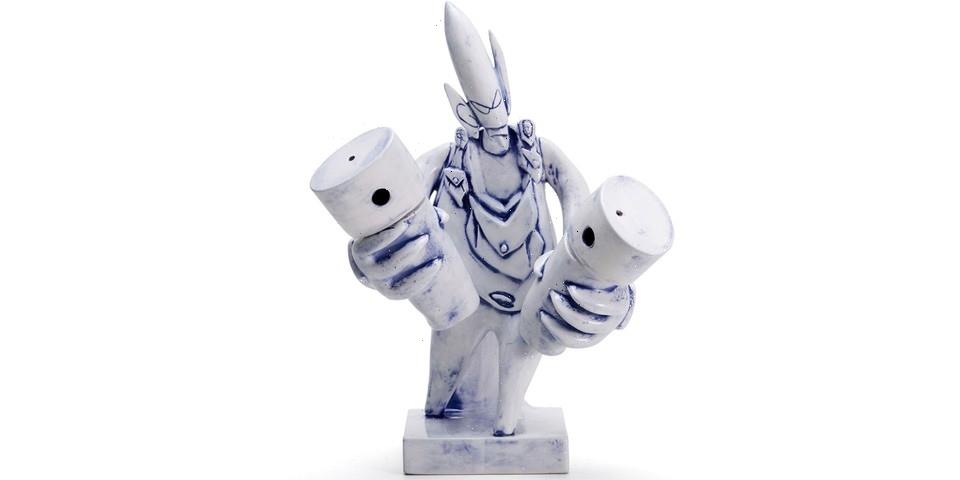 Clothing options begin with a split hoodie that features a dark gray base paired with a black layer visible at the hood, left sleeve and upper portion of the chest. A NBHD print rests on the black chest with Futura’s signature overlaid across the front’s center. As for the back, the capsule’s signature Pointman with spray paint cans lands in white with a co-branded capsule tag found throughout the collection placed next to it. Longsleeves in black and white feature a NBHD stamp design on the front with the Pointman atop it and the capsule tag on the back. Black and white tees have Futura and NBHD signatures next to the capsule tag on the front with the back carrying the aforementioned Pointman and the full NBHD print from the split hoodie as well. A beanie and bucket hat both appear in black with the duo’s signatures on the front, the Pointman on the back and a capsule tag attached to its side. Lastly, a Pointman incense chamber appears in NBHD’s classic ceramic white and blue, holding spray cans that serve as the host for the incense itself.

Release for the Futura Laboratories x NEIGHBORHOOD “HOMESPRAY” capsule takes place January 2 via NEIGHBORHOOD. The Pointman incense chamber will be open for a raffle exclusively via the brand’s online store starting January 2 at 12pm JST and ending on January 3 at 12pm JST with winners announced January 9 at 12pm JST. See the posts below for additional details.

In other fashion news, a preview of HUMAN MADE’s Season 25 Spring/Summer 2023 collection has arrived, launching today via its online and offline stores.
Source: Read Full Article