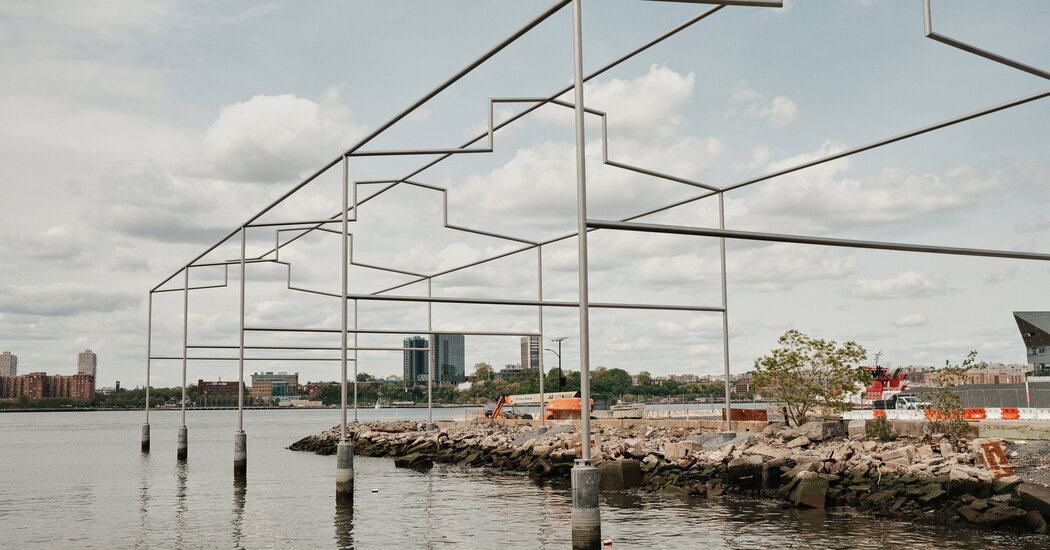 In 2014, the director of the Whitney Museum of American Art, Adam D. Weinberg, invited the artist David Hammons to tour the museum’s still empty new building. Weinberg remembers them standing together at the panoramic fifth-floor window overlooking the Hudson and talking about the history of the waterfront facing the museum, about what was there and what was gone.

Gone, since its demolition in 1979, was Pier 52, once a warehouse for the Baltimore and Ohio Railroad Company, and famous in the art world as the setting for a monumental work of guerrilla-style public sculpture called “Day’s End” by the American conceptualist Gordon Matta-Clark.

The Matta-Clark piece was a work of excision, not construction. In 1975, he commandeered the pier’s immense, by-then half-ruined, shed — it measured 50 feet high and 373 feet long — and with a small crew of workers he cut openings in its walls and floors, the largest being a quarter-moon-shaped incision in the sunset-facing west wall. His purpose was to let in light that would change during days and seasons. He envisioned the basilica-scaled interior as “a peaceful enclosure, a joyous situation.” 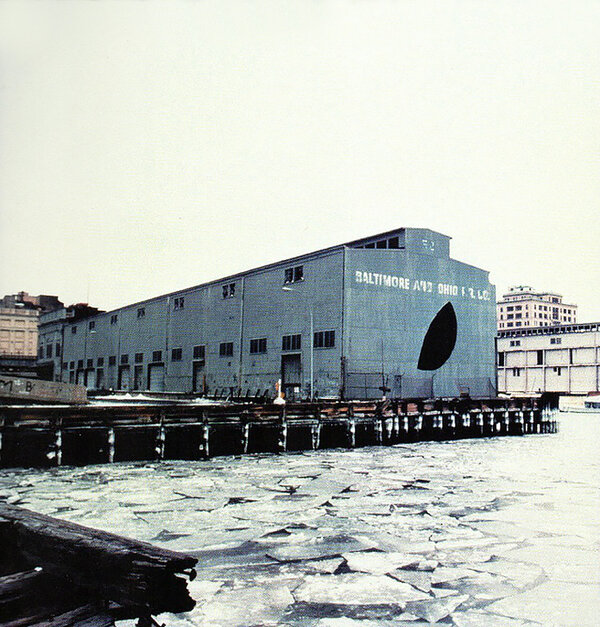 A few days after Hammons’s Whitney visit, Weinberg received in the mail a small pencil drawing from him, a light-touch sketch of the vanished Pier 52, reimagined as a kind of pavilion in open water. There was no explanatory note. Preoccupied with plans for the new Whitney’s approaching debut, Weinberg only later contacted Hammons about the drawing. It turned out that the famously elusive artist, with his signature habit of strategic indirection, had submitted it as a proposal for a site-specific sculpture.

Now, seven years later, that sculpture is in place. Sponsored jointly by the Whitney and the Hudson River Park Trust, it stands, permanently installed on the waterfront opposite the museum on city-and-state owned land, near what will eventually be a large public playing field. Both the location and dimensions of the piece match those of Pier 52 as it once existed. (When pilings were sunk to support the new sculpture, remnants of the old wood pier were found.)

The sculpture doesn’t follow Hammons’s plan completely — it isn’t surrounded on all sides by water — but it cannily translates his original sketch in three dimensional terms. Using lengths of slender, ductile stainless-steel piping, Guy Nordenson, the structural engineer for the project, has managed to suggest the unemphatic weight of Hammons’s pencil lines, and the mirage-like quality of his wall-less, floorless, roofless openwork design. The matte-textured, light-absorbent quality of the steel subtly alters the work’s visibility during the day. There will be no artificial illumination at night.

By naming his piece “Day’s End,” Hammons has made it a homage by one artist to another, but a complicated one. He and Matta-Clark were almost exact contemporaries, born a month apart in 1943; both were active in New York City in the 1970s, Hammons arriving from Los Angeles in 1974. But they traveled in different circles and didn’t meet. Matta-Clark’s primary base was the art scene in SoHo; Hammons’s was one of a group of Black artists associated with the gallery Just Above Midtown, then on West 57th Street. Hammons never saw Matta-Clark’s Pier 52 work, and, as it happened, the overlapping presence of the two men was brief: Matta-Clark died of cancer in 1978 at age 35.

Yet as artists they had much in common. Both made work from found and ephemeral materials: in the case of Matta-Clark, derelict architecture; in the case of Hammons, street trash, often with Black cultural associations — chicken bones, liquor bottles, barbershop hair. And both worked, for the most part, outside the precincts of mainstream art institutions. Indeed, it is not without symbolic significance that despite its proximity to the Whitney, Hammons’s “Day’s End” is not the property of the museum, but of a conservation trust. It is a public monument, not a private one.

A monument to whom, or to what? To a fellow artist, yes, but also, by intention or not, to specific social and personal histories. For me, the most resonant of them dates from before Matta-Clark’s arrival at the site, to the early 1970s, when Pier 52, along with several other piers lining the Hudson in Chelsea and the West Village, served as gay meeting and cruising spots.

Matta-Clark was well aware of the gay presence, spoke of it dismissively, and did his best to keep it off the pier after completing “Day’s End,” which he hoped to promote as “a sculptural festival of light and water” open to the public. (The plan had to be abandoned when the city’s Economic Development Administration filed suit against him for damaging property.) But by then the site, and the gay community that occupied it, had a chronicler and champion in another artist, the Black photographer Alvin Baltrop (1948-2004).

Beginning in the early 1970s, Baltrop, who often camped out in a van near the pier, documented the social and sexual action there. In his pictures from the late 1970s, “Day’s End” can be seen as a backdrop for erotic pursuits. Viewed in this context, Matta-Clark’s project can take on a negative political valence. With its intrusion of unasked for, and possibly unwanted, light, it can be read as an act of art-world colonization. (This complex dynamic surrounding the work was handily summed up by Adrienne Edwards, now the Whitney’s director of curatorial affairs, in her catalog for the 2019 Baltrop retrospective at the Bronx Museum of the Arts.)

And in his “Day’s End,” Hammons evokes an art history moment of his own, one that took place a bit farther downtown. If you stand at his “Day’s End” and look south on the Hudson you can see the commercial and residential towers of Battery Park City in Lower Manhattan. In Matta-Clark’s day, these buildings didn’t exist. All that was there was a big, scrubby stretch of World Trade Center landfill, which, during summers from 1979 to 1985, under the auspices of the nonprofit arts organization Creative Time Inc., served as a stage for programs of public events called “Art on the Beach.”

There in the summer of 1985, Hammons, collaborating with the artist Angela Valerio and the architect Jerry Barr, built “Delta Spirit,” a funky cabin nailed together from scrap wood, mosaicked with crushed cans and bottle caps, and open for performances. Sun Ra and his Solar Arkestra were among the talents that beamed in and played. And it’s worth noting that Nordenson, who gave Hammons’s “Day’s End” material form, contributed, as a young artist, to another art piece on the “beach” that year.

“Art on the Beach” was, at least symbolically, a voice raised against a residential gentrification in Lower Manhattan that was forcing artists, at the time a small but ardent community, out of the neighborhood. It is also possible to interpret Matta-Clark’s “Day’s End” as a similar protest against rapacious, history-crushing “urban renewal” in an area farther north in Manhattan; and to find in Hammons’s new sculpture a response to the present metastasis of real estate development from Hudson Yards down to the meatpacking district, where the Whitney stands.

I suspect, though, that this artist would reject having his work so narrowly read. He has a track record of withholding interpretive comment on his art — “I feel like a magician,” he said recently, “and magicians don’t give up their secrets” — and of thwarting critical consensus around it. For years when Black artists were all but excluded from the white-controlled mainstream, he persisted in mining materials and images from African-American culture, evident in the wonderful exhibition “David Hammons: Body Prints, 1968-1979” currently at the Drawing Center.

But in recent years, with work by Black artists gaining traction in the market, he has moved in different, less obviously identity-grounded directions. “It is now less convincing than ever to speak of Black artists as if they share an enterprise,” wrote the art historian Darby English in his 2007 book, “How to See a Work of Art in Total Darkness.” “Day’s End,” the Hammons version, presses that point home.

But what’s most distinctive about the piece, in the context of this artist’s career, is its declared, set-in-place permanence, a feature in which, to my knowledge, the artist has seldom previously expressed interest. (One of his best-known works, from the early 1980s, found him selling snowballs on the street.)

“Most artists want at least one piece to be immortalized,” he said in a 1986 interview with the art historian Kellie Jones, “So one piece would do it. Because we’re making one piece anyway, I guess, fragments of it.”

Hammons is 77. Is “Day’s End” the one, immortalizing piece he means? I don’t think so. But, as spare and sturdy as a pallet rack and empty of everything but history, light and air, it’s roomy enough to accommodate all the brilliant fragments of an incomparable career.