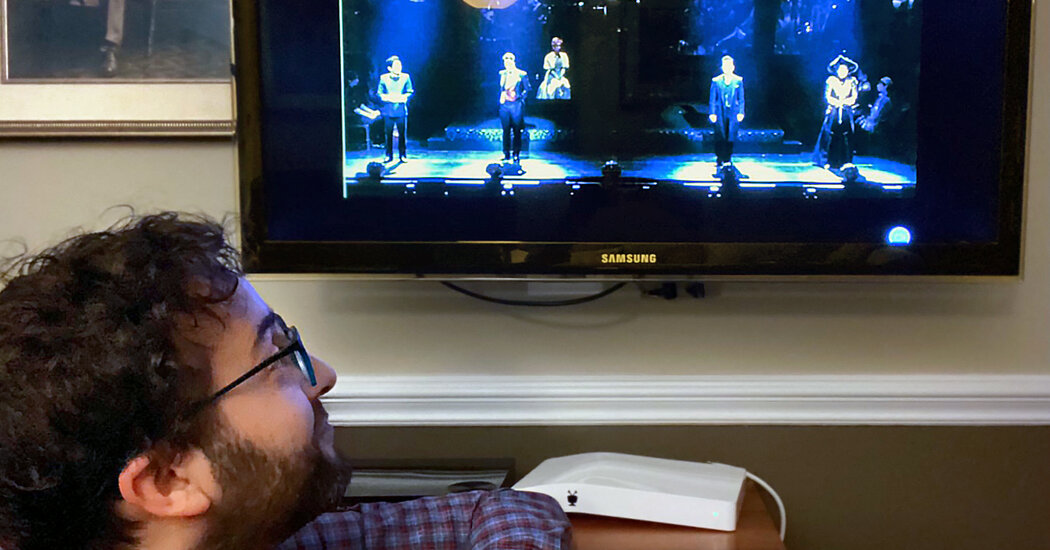 As I settled into my seat before takeoff, I felt, improbably, a sense of accomplishment. That I’d made it onto this (nearly empty) plane felt like a big deal. That I was permitted to travel abroad, a miracle. The road to J.F.K., to this flight, to my seat had already been long and steep.

It began in 2016, when, over Skype, the London-based composer-lyricist Michael Bruce and I wrote the first draft of our musical adaptation of the 2006 film “The Illusionist,” itself based on a short story by Steven Millhauser. It wound past second, third and fourth drafts, past two developmental workshops.

We were working toward a world premiere in Tokyo in late 2020. Our director, Thom Southerland, had a fruitful history with Umeda Arts Theater, one of Japan’s larger producing entities. They were itching to develop a new musical, and “The Illusionist” would provide that opportunity. For the creative team, it was a chance to not only further refine the writing but also to incorporate a crucial, as yet unrehearsed element: the illusions. (The protagonist is a magician, after all.)

Enter the coronavirus. Theaters in America and the United Kingdom shut down. I anxiously tracked the situation in Japan, distraught when they stopped admitting foreign visitors, buoyed to see them make it through the first wave with the virus largely under control. Theaters, crucially, were open, so our production could go ahead as planned, even if the creative team was barred from entering the country.

No matter what, I wanted the production to happen. I’d already had two 2020 regional productions canceled: one, a musical I’d written; the other, a show on which I was consulting. Like so many others in my sidelined industry, I was desperate for any crumb of professional validation.

Umeda had announced that the December debut would star Haruma Miura as Eisenheim, an illusionist in fin de siècle Vienna who reunites with his first love, now engaged to a Hapsburg prince, and, in trying to win her back, upends the fragile, carefully constructed social order. (Edward Norton played the role in the movie.)

Miura, who headlined Tokyo’s “Kinky Boots,” had participated in a workshop of Yojiro Ichikawa’s Japanese translation of our show in 2019. We knew his Eisenheim, intense and charismatic, would be a strong anchor for the piece. The production — and his involvement — seemed to be generating some buzz.

On July 18, I woke to an email relaying the news: Miura, at 30 years old, was dead. Japanese media reported he had hanged himself. The entire team was stunned and saddened, unsure how or if we would proceed.

In the past, I’d been suspicious of “the show must go on” — it seemed designed to coerce workers into tolerating unacceptable labor practices — but now I heard an earnest yearning in the phrase. Theater is, by nature, communal. Surely it would be more healing for all involved to gather and perform the show. What would be gained by giving up?

Then from our producers came a barrage of questions. Would I be willing to quarantine in Tokyo? How quickly could I get myself to the Japanese consulate? (Deus ex machina: Japan began allowing business travelers to apply for visas!) Could we cut the intermission? (Socially distanced restroom use would take too long.) Were we OK with a shift in the schedule? Shortening the run?

Yes, yes to all of it, yes to anything. We just had to do the show. 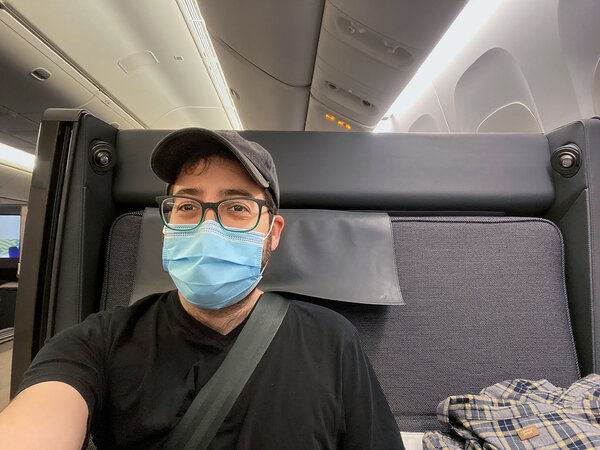 Recasting the main character was a thorny business so we’d decided to keep it in the family, inviting Naoto Kaiho, originally set to play the prince, to step into the role of Eisenheim.

And then, another shoe. Thom was diagnosed with bowel cancer. He had confidence in a full recovery, but he would have to remain in London for treatment. He wasn’t going to be able to make the trip to Japan. Michael and I were worried about him. “Prioritize your health,” we implored.

But Thom was adamant his illness need not derail the show. Our producers once again scrambled and came up with a plan. Thom would direct remotely, via live feed. A solution that might have seemed unreliable, even unthinkable, before the pandemic was now the only way we could carry on.

With the necessary travel permissions, I’d made it to J.F.K., to this flight, to my seat. I snapped a selfie. Everything that could go wrong seemed already to have gone wrong. I felt palpable relief.

At every juncture from here, there would be safeguards and precautions. I tested before flying (nasal swab at an overpriced boutique medical practice) and upon landing at Haneda Airport (spit test in a booth outfitted with photos of pickled plums to encourage salivation). I would join rehearsals after two weeks in quarantine, but even then, I wouldn’t be engaging much with Tokyo: We’d all agreed to avoid indoor dining, bars, museums — any and all crowds.

The safety measures in the rehearsal studio were extensive. Upon arriving each day, participants zipped their personal belongings into assigned garment bags, including the face masks worn during their commutes. The production provided a new mask each day, to be worn throughout rehearsal. No eating was permitted in the room. No sharing phone chargers. The schedule included regular “airing breaks.”

During my first week of quarantine in a Tokyo hotel, I attended rehearsals via Zoom. The choreographer, Ste Clough, was already in the studio, but the rest of the foreign creative team remained sequestered, back-channeling over WhatsApp. Over the course of the week, we cut 15 minutes from the show, replaced a song and juggled notes coming from multiple directions. We staged the first half of our intermission-less musical.

Then, the morning of my eighth day in quarantine, I got a call from a producer. One of the actors was experiencing symptoms and had tested positive for Covid-19. Rehearsals were on hold. Those exposed — 19 cast members; various producers, stage managers and production assistants who were in the room every day; as well as those who had merely stopped by, including our orchestrator and a vocal coach — were being tested that afternoon.

The more optimistic among us shared the hope that the results would validate the precautions taken, allowing work to start again in two weeks, after everyone in close contact with the afflicted actor had waited out their quarantine period.

The next afternoon, at a Zoom production meeting, our lead producer relayed the results. Seven positives. Five onstage, two off. Our efforts may have limited, but certainly didn’t prevent, the virus’s spread. It was becoming increasingly difficult to adapt to the constantly changing circumstances. “Sometimes,” she said, “the bravest thing to do is walk away.”

If we were to resume, I recognized, it would have to be with the fewest possible people in the studio. And, I had to admit, I wasn’t sure I was going to feel safe being one of them. As the apparatus for rehearsing remotely was already in place, I decided to return to New York.

I went straight from J.F.K. into yet another quarantine. I woke at 5 a.m. for daily production meetings that stretched on for hours as our hardworking interpreters made sure every comment was understood in two languages. The Umeda team outlined the path forward. They didn’t feel comfortable asking folks to rehearse in a cramped studio, but our venue, the vast Nissay Theater, with its 1,300 seats and substantial cubic space, would provide a less risky environment.

We would have to shorten the rehearsal period. We would have to simplify the staging to limit physical contact between actors. We wouldn’t have time to implement the tricks, forcing us to refocus those scenes on the reaction to magic rather than on the magic itself.

We would have to inform the audience they’d be seeing a concert staging and offer refunds to the disgruntled and disappointed.

Yes, yes to all of it. We just had to do the show.

We made it through a few days of virtual rehearsal before Prime Minister Yoshihide Suga announced a state of emergency for Tokyo. We were canceled. Our choreographer returned to London. But the state of emergency didn’t actually order theaters to close. If other shows remained open, why not ours? Uncanceled.

Thankfully, none of the positive cases in our company seemed to be severe, but, as our restart date approached, some weren’t yet healthy enough to work. Would we be willing to delay the opening, further shortening the run? Could we simplify the already streamlined staging?

Again, yes. But why? Why were we fighting so hard? Was it because our story, exploring the fragility of truth, felt so relevant to the moment we were living? Or was it because, having overcome so many challenges already, it felt illogical to cower in the face of any new obstacle?

Or were we driven by the need, however selfish, to have something, anything, to show for our efforts? The briefest of runs at 50 percent capacity — how helpful could it be really? No matter what happened in Tokyo, my British collaborators and I — and the show itself — would return to a numbing holding pattern, waiting for theaters in our respective countries to reopen. All we would gain by doing the show would be having done the show. Was that reason enough?

One month to the day after I left Tokyo, “The Illusionist” resumed in-person rehearsals. Of the creative team, only Michael was at the Nissay Theater. Thom and Ste, both in London, rose at 4 a.m. for work. In the United States, I rehearsed most nights until about 3 a.m. The show came together quickly. It had to.

The process felt distant, but the thrills were the sort well known to anyone who works in musical theater: hearing the score animated by a full orchestra after years of it played on one piano; seeing Ayako Maeda’s sumptuous, intricate costumes soak up the stage light and sharpen the actors’ characterizations; watching the talented and brooding Kaiho sink his teeth into the role of Eisenheim.

I watched the Jan. 27 opening performance on our trusty live feed. During curtain call, the cast wept with joy and relief. Afterward a producer walked her phone to each dressing room so those of us celebrating remotely could shower the cast with congratulations.

Filtered through screens, I could still feel the merry, frenetic backstage energy. Nearly 7,000 miles away, I was able experience the elation of opening night. I was making theater again. We were doing the show.