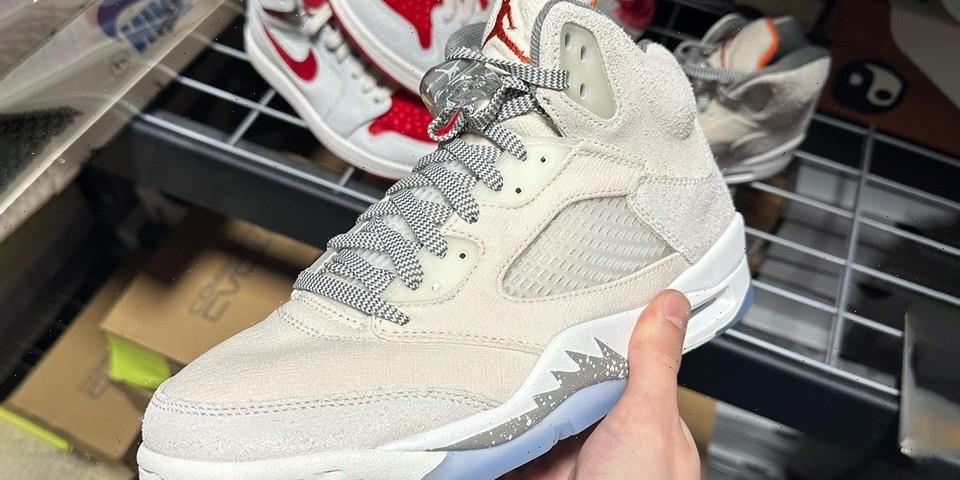 Looking ahead to Jordan Brand’s roster of releases for 2023, its upcoming “Craft” series stands out with its sizable list of carefully assembled colorways. Already, previews of “Craft” looks have appeared on the Air Jordan 2, 2 Low and 4 SE with an Air Jordan 6 and additional Air Jordan 2 Low releases expected to be revealed in the coming months. Now, the Air Jordan 5 joins in with its own take on the theme.

In our first look at the Air Jordan 5 SE “Craft,” a “Light Orewood Brown/Safety Orange-Flat Pewter-Sail” color composition offers a mostly monochromatic presentation of the sneaker. A textile base in gray teams up with a matching gray rough suede at the the heel counter, collar and mudguard. Patterned white and black laces add a pop of color alongside the tongue’s “Safety Orange” embroidered Jumpman logo. At the heel, the embroidered Jumpman favors a silver hue. The sneaker’s signature midsole features white with speckled gray spikes backed by an icy translucent rubber outsole.

Currently, the Air Jordan 5 SE “Craft” is slated to release June 17 via Nike and select Jordan Brand retailers at a price of $210 USD. However, this is subject to change as we still await official details and imagery from the Swoosh itself.

In other footwear news, the Korean-exclusive Air Jordan 1 Low “SNKRS Day” has been officially revealed by Nike ahead of its August 2023 release date.
Source: Read Full Article